Manchester City will look to get closer to the Carabao Cup final when they host Bristol City at the Etihad in the first leg of the semi-final on Tuesday.

The Carabao Cup enters its semi-finals stage this week, with the first leg of both the ties due to be played out. On Tuesday, Manchester City will be aiming to take another step towards an unprecedented quadruple when they welcome Championship side Bristol City at the Etihad.

The hosts have been on a rampage this season and are yet to lose a domestic game, with their only defeat coming in a UEFA Champions League dead rubber. Pep Guardiola’s men advanced to the semi-finals of the Carabao Cup by beating Leicester City on penalties after the game ended in a 1-1 draw.

Bristol, on the other hand, have been in decent form this season too, with the Championship side in the thick of the battle to secure promotion to the Premier League. In the Carabao Cup, the Robins have beaten four Premier League sides to advance to the semi-finals, with the most recent triumph  coming over holders Manchester United.

The two sides last met in the same competition 11 years ago, with Manchester City narrowly winning 2-1. Ahead of their latest meeting on Tuesday, The Hard Tackle takes a closer look at the encounter.

Pep Guardiola does not have any fresh injury concerns to deal with following the 4-1 win over Burnley in the FA Cup last weekend. The Manchester City boss continues to remain without four first-team players ahead of the visit of Bristol on Tuesday.

Benjamin Mendy (knee), midfielder Phil Foden (ankle) and striker Gabriel Jesus (knee) are certain absentees due to their respective problems, while the fitness situation of captain Vincent Kompany is unclear as he continues to struggle with a calf injury.

Meanwhile, Guardiola should name another side that is a mix of second string players and first-team stars on Tuesday, with the likes of Claudio Bravo, Oleksandr Zinchenko and Danilo likely to retain their places from the win over Burnley.

The focus, as always, will be to patiently break down what is likely to be a stubborn Bristol defence, with Kevin De Bruyne and Ilkay Gundogan the schemers from midfield. Fernandinho should test their resolve with a few long-range efforts as well while Sergio Aguero will look to create space for the wingers around him with his movement.

Like Guardiola, Lee Johnson does not have any fresh injury concerns either following his side’s 3-0 loss to Watford in the FA Cup. The Bristol City boss will be without five first-team players ahead of the trip to the Etihad on Tuesday.

But, the hero of the quarter-finals shock win, Korey Smith is likely to be fit and available despite coming off midway through the FA Cup loss last weekend due to a knock. Bristol City assistant head coach Dean Holden confirmed the same, iterating that his substitution was only precautionary, and that he should be “okay”.

Meanwhile, skipper Bailey Wright, Nathan Baker, Joe Bryan and Bobby Reid are all expected to return to the starting lineup after they were rested for Tuesday’s game. Their return could see a more free flowing style of play from the visitors whenever they do get possession of the ball.

The primary focus though, will be to defend astutely and kill off space to put balls between the lines, directing most of the City play towards the wings for crosses to be put into the box. But, they will need to attack with purpose as well, if they are to take anything from the first leg. 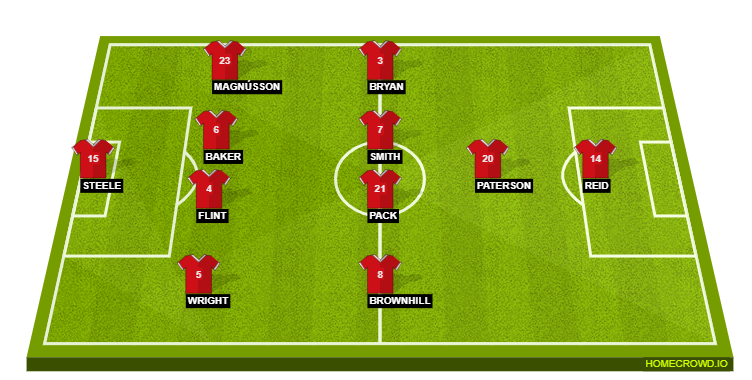 Smith was the hero of the spectacular quarter-final win over Manchester United, but there was more to his performance than meets the eye. The player helped break up play alongside Marlon Pack in midfield before deceptively advancing forward off the ball to make himself available on a counter attack.

Smith will need to be at his best once again on Tuesday, if he is to help his side end Manchester City’s surreal 31-game domestic unbeaten record. The midfielder has already iterated that he is looking for another “special moment” against the Citizens, and it may yet arrive again on Tuesday.

Another week, another game that Manchester City will look to win to take another step towards an unprecedented quadruple, despite Pep Guardiola’s insistence that they are not going to win all four trophies. With one eye on the game against Liverpool, the hosts may look to make short work of Bristol to rest a few key players.

But, it won’t be an easy proposition by any means, with their defence being tested a lot recently, and Bristol likely to play their natural game, as Lee Johnson has iterated prior to the match.

Nevertheless, with a few first-team players likely to start, Guardiola & co. should have enough quality to take a substantial lead in the first leg. The Hard Tackle predicts a 3-1 win for Manchester City.