Tottenham Hotspur will hope to kickstart their FA Cup campaign with a win when they take on lower league opponents AFC Wimbledon in the third round, at the Wembley Stadium, on Sunday, with an eye on going all the way in the competition and get their hands on a major silverware.

Tottenham haven’t had the most consistent of seasons so far and have been unable to live up to the expectations following their second-placed finish in the Premier League in the preceding season. However, they come into the game on the back of some strong results – results that included heavy wins over the likes of Burnley and Stoke City during the festive period.

Having already been knocked out of the Premier League title race and the Carabao Cup, the FA Cup represents the best avenue for Tottenham to win a trophy and end their 10-year barren run.

On the other hand, Tottenham’s opponents on the day, AFC Wimbledon are enduring a torrid season in the Football League One. They currently occupy the 21st place in the table and are battling relegation. But, the 2-0 win over Southend United in their previous fixture would give them some confidence heading into the big game on Sunday.

The two teams will be playing each other for the first time since the League One side was formed fifteen years ago in 2002.

Danny Rose (Knee) is ruled out of the game for Tottenham along with fellow defender Toby Alderweireld who is out till February with a hamstring problem. Ben Davies is also a doubt after he was taken off injured in Spurs’ 1-1 draw against West Ham United during the midweek.

Tottenham are likely to go into the game without a number of their heavy-hitters. One would expect that Pochettino will take this game as an opportunity to rest some of the A-listers like Harry Kane, Christian Eriksen, Hugo Lloris etc., while there are likely to be starts for Fernando Llorente, Juan Foyth and Kyle Walker-Peters.

Michel Vorm is expected to start between the sticks, while the back four is likely to comprise of Kieran Trippier, Davinson Sanchez, Foyth and Walker-Peters, with Serge Aurier, Davies and Jan Vertonghen dropping out.

Midfielder Victor Wanyama could be in line for his first start since his return from injury. The Tottenham midfielder has made substitute appearances in the last two matches and might be given the nod, alongside the young Harry Winks who also hasn’t played a lot through the busy period.

Llorente is expected to lead the line for Tottenham, days after he got his first Premier League goal for the club, against his former side Swansea City. Dele Alli should continue to operate in behind him, flanked by Georges Kevin-N’Koudou and Erik Lamela.

Wimbledon captain and veteran defender Barry Fuller is likely to feature, despite doubts over his involvement due to an ankle injury, manager Neal Ardley has confirmed. Fellow defender Jon Meades (hamstring) and striker Cory McDonald (foot) are also expected to take the field at Wembley, having trained on Friday with the first-team.

On-loan goalkeeper George Long is likely to continue in goal for the Dons, with Fuller and Meades occupying the full-back positions. Adedeji Oshilaja and Darius Charles are expected to line up in the heart of the defence to try and keep the threat of Llorente under check.

Former Tottenham youth players Andy Barcham and Dean Parrett will be hoping for a chance to feature against their boyhood club as part of the four-man midfield with Anthony Hartigan and Nadjim Abdou completing the quartet. 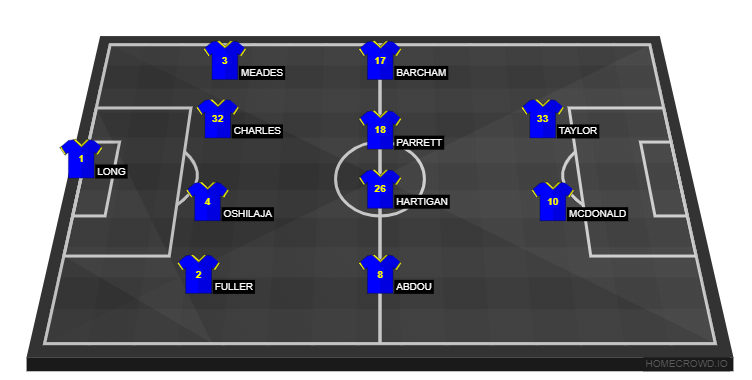 Relieved to be back. (Photo courtesy – Harry Hubbard/Getty Images)

It has been a tough past year for Tottenham winger Erik Lamela. Having undergone multiple hip surgeries, the Argentine has returned to action after a year-long layoff and has looked lively in his appearances so far, registering two assists in the Premier League.

With Kane, Eriksen and Son all likely to be rested, he will have to shoulder a major load of the attacking responsibilities for Tottenham on Sunday and will want to leave a mark on the game with a strong performance.

Tottenham have found it hard to break down teams at Wembley this season, with the likes of Swansea City and Burnley getting away with points at the venue early in the season. However, the gulf of class between them and AFC Wimbledon, who are tethering around the relegation zone in the third division, could turn out to be impossible to bridge.

Pochettino will ring in the changes, no question, but his side should be able to do the job against the Dons quite comfortably and The Hard Tackle predicts an easy 3-0 win for Tottenham and progression to the next round.