Manchester City will look to kick off their FA Cup campaign like every other this season when they host Burnley in a 3rd round tie at Etihad on Saturday.

The FA Cup third round has thrown up quite a few interesting matchups. One of the games of the round sees Manchester City face off against Burnley at Etihad on Saturday, with the Premier League leaders aiming to kick off a fourth competition on a winning note as they strive to win an unprecedented quadruple this season.

Manchester City have been on a tear this season, having lost just one game in all competitions and only dropping points on two occasions in the Premier League. Burnley, on the other hand, have been the surprise package of the season, sitting seventh on the Premier League table, bidding to finish in the top half of the table.

As far as FA Cup success is concerned, Manchester City are bidding to win the premier cup competition for the sixth time, with their last success coming in 2011. Burnley’s only success in the competition came more than a century ago, in 1914.

The two sides are meeting for the second time this season, with the previous result ending 3-0 in favour of Pep Guardiola’s men. Ahead of their latest meeting on Saturday, The Hard Tackle takes a closer look at the encounter.

Pep Guardiola has a few injury concerns to deal with ahead of the visit of Burnley on Saturday. The Manchester City boss is set to be without five first-team players for the cup tie, with Kyle Walker doubtful due to a minor groin injury.

Vincent Kompany has failed to recover from a calf injury, and the Manchester City captain has joined Gabriel Jesus (MCL), Benjamin Mendy (ACL) and Phil Foden (ankle) on the treatment table. David Silva has been given the permission to return to Spain for a second time after the premature birth of his son.

Guardiola has iterated that he will field a strong starting lineup despite the fixture congestion considering his side is facing a strong opposition in Burnley. The likes of Nicolas Otamendi, Fabian Delph, Kevin De Bruyne, Raheem Sterling and Sergio Aguero should, thus, start on Saturday.

The focus, as always, would be to patiently build up the pressure and suffocate a defence that is likely to sit deep and kill off the half spaces. Kevin De Bruyne will, therefore, be a key factor with his ability to pass quickly and precisely.

Sean Dyche, like Guardiola, has a few major absentees from his squad for the cup tie against Manchester City. The Burnley boss, on Saturday, will be without five first-team players, with Scott Arfield the latest player on the treatment table after sustaining a hamstring injury against Liverpool on New Year’s Day.

Chris Wood (leg) and Stephen Ward (knee) are on the road to recovery from their respective injuries, but are no closer to returning for Saturday’s game. Tom Heaton (shoulder) and Robbie Brady (knee) are long-term absentees.

Meanwhile, the inferior squad depth at Sean Dyche’s disposal as compared to his counterpart means that the Burnley manager will be unable to introduce a lot of fresh legs on Saturday. But, a few rotations are still on the cards, with the likes of Matthew Lowton, Jonathan Walters and Sam Vokes likely to start.

Regardless of the changes, the onus, as always, will be on defending with numbers and in organised fashion. The Clarets will focus on depriving Kevin De Bruyne the space he needs to make the magic happen while attacking with pace and purpose on the other end.

Set pieces will be a key factor too, where the abilities of Steven Defour and Johann Berg Gudmundsson will come under the spotlight. 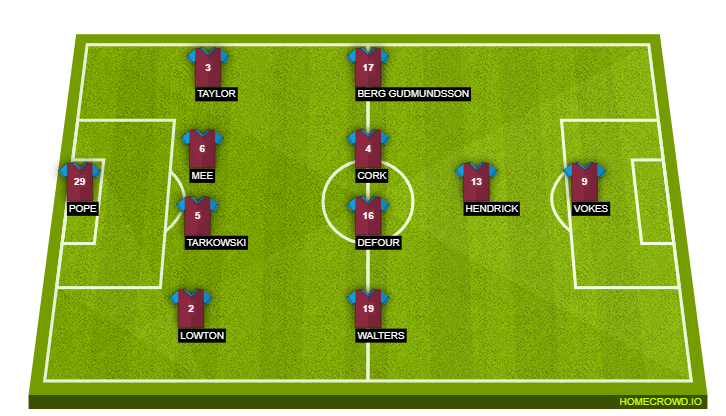 Just what, or who, can stop Manchester City at the moment? Crystal Palace may have ended their winning run last weekend, but the Citizens’ juggernaut does not look like running out of steam anytime soon, with Pep Guardiola’s men plundering 64 goals in 22 games, and that’s just the league.

One man who might have a say in matters on Saturday is Nick Pope. The Burnley goalkeeper was in some fine form when the two sides met in the league earlier this season, making seven saves in all. On Saturday, he will need to produce more of the same to frustrate the hosts and possibly give his side a sniff at claiming a shock win.

Burnley have been one of the few sides who have managed to frustrate Manchester City for a sustained period in a game this season. But, that was when matches weren’t coming thick and fast. The packed festive period seems to have taken a toll on a relatively slim squad, although their spirits haven’t been dampened one bit.

That spirit, combined with their ability to make the little moments count is exactly what Sean Dyche will be banking on at Etihad. However, fatigue is likely to come into play, and the greater quality of squad depth at Pep Guardiola’s disposal should see Manchester City prevail in the end.