The FA Cup moves into its 3rd round this weekend, with all the bigwigs of the Premier League joining commencing their campaign in the competition. At Old Trafford, Manchester United will look to begin their campaign on a positive note when they welcome Derby County on Friday.

Manchester United last won the competition two years ago, when they came from behind to beat Crystal Palace in the final and win their only trophy under Louis van Gaal in May 2016. Jose Mourinho’s men come into Friday’s encounter carrying some positive momentum after their comfortable 2-0 win over Everton on Monday.

Derby, on the other hand, have won the FA Cup just once in their history, with the solitary success coming way back in 1946. The Rams have been on a fine run of form recently, suffering their last loss in all competitions in November. The positive results have seen them climb up to 2nd on the Championship table.

The two sides last met in the same competition two years ago, with Derby being one of the teams that Manchester United beat on their way to the FA Cup triumph. Ahead of their latest meeting on Friday, The Hard Tackle takes a closer look at the encounter.

Jose Mourinho seemed to exude some relief in his pre-match press conference, with the injury woes in his squad starting to ease up. Ahead of the visit of Derby County on Friday, only three first-team players remain on the treatment table, with two of them expected to return by the end of the month.

Eric Bailly (ankle), Antonio Valencia (hamstring) and Zlatan Ibrahimovic (knee) are the certain absentees, with Ashley Young also unavailable as he serves the second of his three-match ban. Michael Carrick (calf) and Marouane Fellaini (knee) are off the treatment table, but the game has come too soon for the duo.

Another player who has recovered from an injury, is Romelu Lukaku, with the Belgian taking little time to put the concussion suffered against Southampton behind him. But, Lukaku might be given the night, or benched at most on Friday, with Mourinho likely to give him some more time to rest.

In his stead, Marcus Rashford could start as the focal point of attack and strangle the Derby defence with his pace and directness. Anthony Martial is also likely to start on Friday after being taken off early on Monday, while Henrikh Mkhitaryan might get another chance to make a mark.

Behind the trio, there should be a few rotations with the likes of Matteo Darmian, Daley Blind, Axel Tuanzebe and Scott McTominay likely to get a rare start. One player who is certain to start is Sergio Romero, with Mourinho confirming the same.

If Mourinho’s problems are easing up, Gary Rowett practically has negligible issues to contend with ahead of the big trip to Old Trafford. On Friday, the Derby manager is likely to be without only two key first-team players.

Joe Ledley is doubtful due to a back injury while Manchester United academy graduate Tom Lawrence is unavailable to face his former side as he continues struggling with a hip injury. Apart from the duo, a few changes could be in the offing, with Rowett suggesting that the busy festive fixtures have taken their toll.

One area that is unlikely to see a lot of rotations is defence, with the back-line being a huge strength of Rowett’s squad. The first-choice central defensive partnership of Richard Keogh and Curtis Davies should, thus, start at the heart of defence, with Andre Wisdom and Craig Forsyth the full-backs.

Up ahead in midfield, Tom Huddlestone will be a key man to be the anchor in front of the back-line while also testing the Manchester United defence with his long-range shooting prowess. In attack, the onus will be on in-form forward Matej Vydra to continue his fine goalscoring run against the hosts.

Sam Winnall could start as the focal point of attack for only the second time in 12 games as he continues to make his way back from injury. Another player who is likely to continue his return trail from injury is George Thorne. 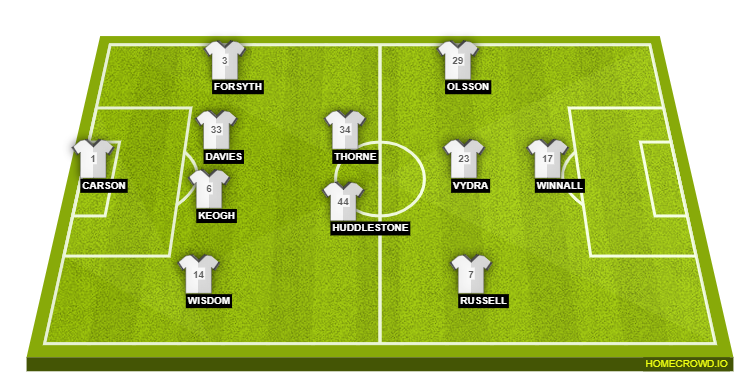 The chances seem to be running out for the Armenian playmaker, who seems to have lost all confidence. Mkhitaryan got a couple of opportunities last month, but couldn’t make much of them and the match against Derby might just be his last chance, with a January exit still a possibility.

With his Manchester United future reportedly on the line, Mkhitaryan will hope to put in a positive, perhaps game changing performance to earn a much needed win for his side. With fresh, pacy legs in front of him, he will look to set the chances up for Rashford and Martial.

Manchester United ended a troublesome festive period on a positive note and they will look to kick on from the win over Everton on Monday when they host Derby. The Rams are going through a good run of form, and would have taken heart from the performance of Bristol City in the Carabao Cup against the Red Devils last month.

That game showed that anything is possible in cup ties, although Jose Mourinho & co. will be desperate to avoid another such humiliation on Friday. With some fresh legs set to be introduced, and a strong contingent likely to come off the bench, Manchester United certainly start as favourites.

But, the hosts can’t take Derby lightly, with the visitors posing a bigger threat than Bristol did, on paper. The Hard Tackle though, expects Manchester United to avoid another defeat to a lower league side, winning 2-0 on Friday.