The second half of the 2017-18 Premier League season has kicked off with a bang, with several keenly contested affairs on Boxing Day. In the country’s capital, another mouth-watering encounter is on the cards when Crystal Palace play hosts to Arsenal at Selhurst Park on Thursday.

The hosts have been on a roll of late, with just one loss in their last ten games – and none in their last eight. The tremendous run of results over the last two months has lifted them well off the bottom of the pile in the Premier League and up to 16th on the table.

Arsenal, on the other hand, have blown hot and cold in December, with just one win in five games. The inconsistent performances reflect on their standing on the table as well, with the Gunners falling down to sixth, four points behind Liverpool, although they have a game in hand.

The corresponding fixture last season had produced one of the shock results of the 2016-17 season, with Palace handing a humiliating 3-0 loss to Arsenal that helped them escape relegation at the end of the campaign. Ahead of their latest encounter on Thursday, The Hard Tackle takes a closer look at the encounter.

The Eagles continue to look over their shoulders despite a superb unbeaten run. But, they are definitely taking all the steps in the right direction, also helped by the fact that there are very little injury concerns hampering the preparations of Roy Hodgson in recent weeks.

Heading into Thursday’s encounter, Mamadou Sakho (calf) and Joel Ward (groin) are the only short-term absentees, with Connor Wickham (ACL rupture) and Chung-Yong Lee (muscular) absent for a longer period, although the duo should be available once again upon the turn of the year.

Christian Benteke is available after serving a one-match ban, and the Belgian striker should be restored into the starting lineup on Thursday. The striker would be one of the key men for Palace as he would help provide a physical presence as well as the focal point in attack that Andros Townsend and Wilfried Zaha like to play off.

Speaking of Zaha, the English winger, who should start centrally, will look to exploit the lack of pace that Laurent Koscielny has shown in recent weeks. Defensively, the absence of Sakho is often telling, and the duo of Scott Dann and James Tomkins might struggle once again against the trickery of Mesut Ozil. 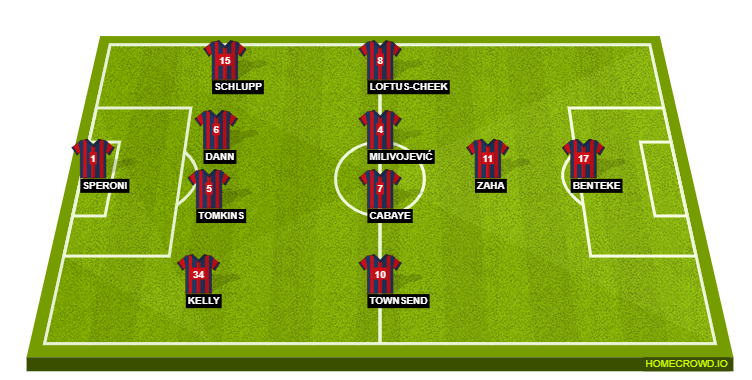 Like Hodgson, Arsene Wenger does not have several fitness problems bothering him either. Ahead of the short trip to Selhurst Park on Thursday, the Arsenal boss is without four first-team players, with only two of those being pressing concerns.

Nacho Monreal is a major absentee, with the Spaniard picking up an ankle injury last weekend that will rule him out for the next two weeks. Aaron Ramsey’s absence (hamstring) is a bit of a problem too, while Olivier Giroud (hamstring) and Santi Cazorla (Achilles) are the other two players on the treatment table.

Meanwhile, the biggest bone of contention on Thursday would be the left side of defence, with Sead Kolasinac battling to take his spot back from Ainsley Maitland-Niles, who has displaced the Bosnian in the last couple of weeks. With the young Englishman being quite impressive in the game against Liverpool, he could start once again.

In Monreal’s absence, Wenger should stick with a back-four once again, with the reliable duo of Laurent Koscielny and Shkodran Mustafi shoring up defence. Jack Wilshere and Mesut Ozil will be the creative powerhouses looking to split the hosts’ defensive lines.

Alexandre Lacazette and Alexis Sanchez will be the danger men with their movement that could see them stretch the Palace defence, with the former looking to run off the shoulders of Dann and Tomkins.

Crystal Palace have been resurgent under the tutelage of Roy Hodgson, particularly over the last two months. A key catalyst of this revival in fortunes has been Wilfried Zaha, whose tireless runs and nippy runs have proven to be menacing for many a defensive unit. His next target – Arsenal.

Laurent Koscielny has been woefully off pace, struggling with a chronic Achilles problem that has left him vulnerable against pacy attackers. Zaha would look to exploit the Frenchman’s new-found weakness, and if he does so successfully, another shock win could be on the cards for Palace.

London derbies often serve up to be keenly contested affairs full of goals and incessant action. Thursday should be more of the same as Crystal Palace welcome Arsenal to Selhurst Park. The Eagles have been quite strong at home under Roy Hodgson, while Arsenal have struggled on their travels, meaning this game should be full of goals.

While a repeat of their 3-0 shock back in April might just be a tall order, it wouldn’t be a surprise to see Palace hold the Gunners to a score draw. The Hard Tackle predicts a competitive 2-2 draw, although it can go either way on the night.