Manchester United and Burnley will both be looking to return to winning ways when they take on each other at Old Trafford on Tuesday.

The December festive frenzy continues in England on Tuesday as the traditional Boxing Day fixtures kick off Gameweek 20 of the Premier League. At Old Trafford, a Lancashire derby of sorts, will be one of the matches of the Gameweek as Manchester United play hosts to Burnley.

Manchester United have seen their form stutter over the last few weeks, having won only two of their last five matches in all competitions. Their most recent encounter was especially disappointing as their wastefulness cost them with practically the last kick of the game as Leicester City held them to a 2-2 draw.

Burnley, on the other hand, come into this match on the back of a 3-0 loss to Tottenham at Turf Moor on the weekend – their heaviest defeat of the season – that ended their three-game unbeaten run. The Clarets are still positioned quite well, with their success in the first half of the season putting them 7th on the table.

The corresponding fixture last season saw Burnley holding Manchester United to a frustrating 0-0 draw, with captain Tom Heaton making an incredible 11 saves. Ahead of their latest encounter on Tuesday, The Hard Tackle takes a closer look at the encounter.

Jose Mourinho continues to be without several first-team players ahead of the visit of Burnley. The Manchester United boss could be without as many as six key men for Tuesday’s encounter, with Chris Smalling and Matteo Darmian the latest players whose respective fitness problems are a concern.

Darmian is recovering from an unspecified injury while Smalling seemed to have picked up a groin problem in the game against Leicester. The duo are doubtful, with Antonio Valencia (hamstring), Eric Bailly (ankle), Michael Carrick (calf/heart) and Marouane Fellaini (knee) already on the treatment table.

Meanwhile, Mourinho is expected to warn his side to not repeat their mistakes against Leicester, with Burnley capable of punishing them in an even worse manner. With that in mind, being clinical will be imperative, with the pace and directness of Anthony Martial and Marcus Rashford key against a Burnley defence that will sit back.

Juan Mata’s role will be especially key, with the Spaniard the only player capable of splitting what will be a compact Burnley back-line. Jesse Lingard, too, will need to press the Burnley defenders effectively if they are to stop the visitors from creating twin banks of four.

At the back, Phil Jones might have another new partner this season if Smalling fails to be fit for the game, with Marcos Rojo likely to replace the Englishman. Victor Lindelof could start as the right-back once again after an impressive shift over the weekend.

Like Mourinho, Sean Dyche too, has a few roster issues to deal with before visiting Old Trafford. On Tuesday, the Burnley boss might be without three key first-team players due to injury problems or suspension.

Dyche is sweating over the fitness of Chris Wood, who limped off with a hamstring injury in the loss to Tottenham on Saturday. If the New Zealand striker fails to recover for the game against Manchester United, Ashley Barnes or Sam Vokes could be deployed as the striker.

Stephen Ward (knee) is doubtful as well, with Charlie Taylor his deputy. James Tarkowski is the third man sidelined as he serves the second of his three-match ban. The Englishman’s place should be taken up by Kevin Long.

Meanwhile, Sean Dyche will again set his side up to defend with numbers, with two banks of four likely to be set up to frustrate Mourinho & co. The two defensive lines should be instructed to remain compact so as to force the Manchester United attack to be restricted to crossing, which his defenders are quite comfortable against.

Going forward, the role of Johann Berg Gudmundsson will be key, with the Icelander likely to be charged with initiating the counterattacks, with the pace of Barnes also coming handy. The burly Jeff Hendrick will attack centrally and David De Gea will need to be wary of the Irishman’s shooting abilities. 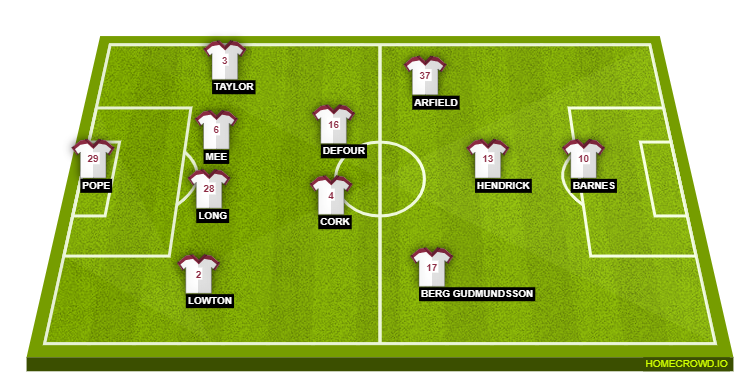 Saturday’s draw against Leicester had very few positives for Manchester United. The biggest takeaway for Jose Mourinho, though, has to be Romelu Lukaku’s performance, with the Belgian striker showing a refreshingly different, creative side to his game.

Lukaku seems to have already come a long way under Mourinho, adding different facets to his game, and it will only reap positive dividends in the long run. On Tuesday though, he might just take on the responsibility of scoring the match clinching goals himself after several of his teammates let him down over the weekend.

Burnley have proven to be one of the hardest nuts to crack in the Premier League this season, with Sean Dyche having one of the best defensive units of the Premier League at his disposal. The last two results seem to have shown a chink in their armour though, with high pressing a key to unlocking their defence.

Jesse Lingard will know his job then, and an Arsenal-esque performance could see Manchester United take advantage of the recently exposed chink. The hosts will be hurting after the Leicester result, and a response is expected as well, which is why The Hard Tackle predicts a 2-0 win for Mourinho & co.