Manchester United will look to put the disappointment of their League Cup elimination aside when they face Leicester City at the King Power Stadium.

The Premier League will be halfway through a busy season when Gameweek 19 ends on Saturday night. The last match of the weekend pits Leicester City against Manchester United at the King Power Stadium, with both sides looking to get back to winning ways following midweek defeats in the Carabao Cup.

Leicester were eliminated by Manchester City in penalties after the match ended 1-1 at the end of extra time. Claude Puel’s men have now lost each of their last two games, having been defeated by a resurgent Crystal Palace side last weekend.

Manchester United, on the other hand, were the shock losers of the Quarter-Finals, losing 2-1 at Bristol City deep into injury time of the regulation 90 minutes. But, their Premier League form has looked positive, with the Red Devils winning each of their last two games.

The reverse fixture, back in August, ended in a comfortable 2-0 win for Manchester United, with super subs Marcus Rashford and Marouane Fellaini sealing the three points. Ahead of their latest meeting on Saturday, The Hard Tackle takes a closer look at the encounter.

Claude Puel does not have many injury concerns to deal with ahead of the visit of Manchester United. The Leicester City boss will be without just two first-team players on Saturday, with Robert Huth (foot) and Matty James (Achilles) on the sidelines, although the duo have returned to training and should be in contention in the coming weeks.

Wilfred Ndidi is in contention to return to the starting lineup after serving his one-match suspension in the loss to Manchester City. There’s some more positive news, with Demarai Gray escaping punishment for allegedly deceiving the match official in the midweek game.

Having not been banned for the incident, Gray will now be one of the key men for Puel, alongside Riyad Mahrez and Jamie Vardy, with Leicester expected to adopt a counter-attacking approach. Ndidi will be important in midfield to stifle the dangerous Paul Pogba.

Defensively, the Foxes have posed a vulnerable look all season long, and the pressure will be on Harry Maguire and Wes Morgan to negate the threat of a resurgent Romelu Lukaku, while Danny Simpson is likely to deal with the pace and trickery of either Marcus Rashford or Anthony Martial. 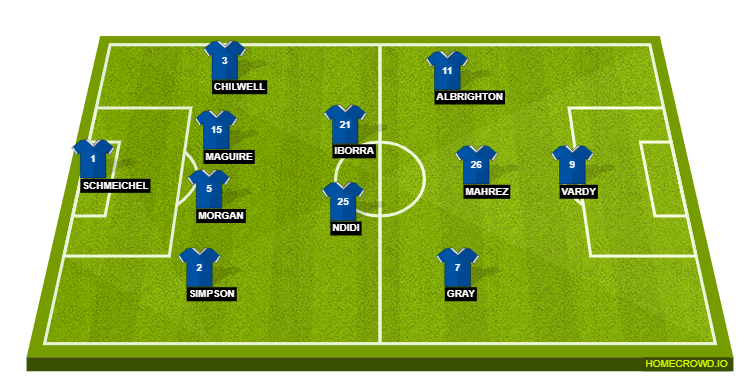 Unlike Puel, Jose Mourinho has several injury concerns to deal with ahead of the trip to King Power. The Manchester United boss will be without four key first-team players for the game on Saturday, with Eric Bailly (ankle), Antonio Valencia (hamstring), Marouane Fellaini (knee) and Michael Carrick (calf) on the sidelines.

The absence of Bailly and Valencia, in particular, is a major cause for concern, with very little to choose from at right-back beyond the latter. While Mourinho does have cover for Bailly at the heart of defence, another injury could prove to be disastrous.

Meanwhile, Paul Pogba, who is expected to don the armband, is set to return to a Premier League lineup for the first time in three weeks, with Mourinho set to make a raft of changes from Wednesday night. The Frenchman’s comeback could prove to be crucial in helping the midfielder control the proceedings from midfield.

Jesse Lingard will be another key man in front of Pogba, with Mourinho likely to deploy him in the hole to do the pressing job and create space. Romelu Lukaku’s aerial abilities will be one quality that the Manchester United boss will look to make use of, with Leicester being the worst Premier League side in the air.

At the back, Chris Smalling and Phil Jones will need to be wary of not being stretched too much by Jamie Vardy, which Riyad Mahrez will look to exploit from down the middle.

It’s common knowledge by now that Manchester United are a far improved side with Pogba running the show in the middle of the park. Likely to don the armband on Saturday, the Frenchman will again need to be the midfield general for the visitors, if they are to continue winning in the Premier League, and in dominant fashion at that.

Saturday’s final game will bring together two teams whose form has been exceedingly brilliant as well as frustratingly poor, all within the span of the last one month. For Manchester United, the major lows have been in the absence of Paul Pogba, whose return would be a welcome one for Jose Mourinho.

Leicester are a hard team to beat at home though, and the visitors will need to be at their very best to get the result they want. Having said that, with the Foxes playing at near-full strength in the Carabao Cup, fatigue is likely to set in, which is why The Hard Tackle predicts a 3-1 win for Manchester United.