Arsenal will aim to clinch progression into the semifinal of the Carabao Cup when they host West Ham United at the Emirates on Tuesday.

The festive frenzy continues in England, with midweek round of games. This time, the action will be in the Carabao Cup, which enters its Last 8 stage. And at the Emirates, Arsenal will be looking to progress into the semifinals for the first time since 2011 when they welcome West Ham on Tuesday.

Both sides sealed their place in the Last 8 following fighting come-from-behind wins. While the Gunners beat Norwich City in extra time thanks to a brace by Eddie Nketiah, West Ham beat rivals Tottenham 3-2, in what was Slaven Bilic’s last win as the manager of the East Londoners.

The Hammers would be confident of a big scalp in this round as well as they come into the game on the back of some fantastic relegation pull-away form. Arsenal, on the other hand, would be buoyed as well, having overturned a three-game winless run in the Premier League over the weekend.

The two sides are, in fact, meeting for the second time within a week, with the last game between them ending in a goalless stalemate. Ahead of their latest meeting on Tuesday, The Hard Tackle takes a closer look at the encounter.

Arsene Wenger’s injury woes have eased up considerably, with the Arsenal boss without just two first-team players heading into Tuesday’s cup tie. Santi Cazorla (Achilles) is a long-term absentee while Aaron Ramsey (hamstring) will be available after the turn of the year.

Apart from Walcott, several other fringe players are expected to start, as is often the case in the League Cup for Wenger, despite a semi-final berth at stake. And so, the likes of Jack Wilshere, Mesut Ozil, Alexis Sanchez and others are likely to be rested on the night.

While Arsene Wenger’s near-non existential injury problems will help him make rotations, if he so decides to, David Moyes has no such luxury ahead of the cross capital trip to the Emirates on Tuesday.

The likes of Jose Fonte (ankle), Sam Byram (thigh), Cheikhou Kouyate (hamstring) and Edimilson Fernandes (ankle) were already unavailable due to their respective injuries, and could now be joined by a trio of key players for the cup tie.

Captain Mark Noble (hamstring), Pablo Zabaleta (dead leg) and Mark Arnautovic (calf) are all major doubts due to injuries and niggles picked up in the win over Stoke City over the weekend. To make matters worse, Manuel Lanzini will miss the game too after attracting a suspension for diving in the game against the Potters.

But, there is some light at the end of the tunnel for Moyes, with Winston Reid available after a one-match ban, while Andy Carroll is in contention having recovered from a back injury. One player who is certain to start is Joe Hart, who has not featured in any of the last four games for the Hammers.

As far as the consequences of the injuries are concerned, Michail Antonio could be deployed as a right-back if Zabaleta is not fit enough to start. In midfield, Declan Rice could get a rare chance, with Pedro Obiang the only other fit midfielder. 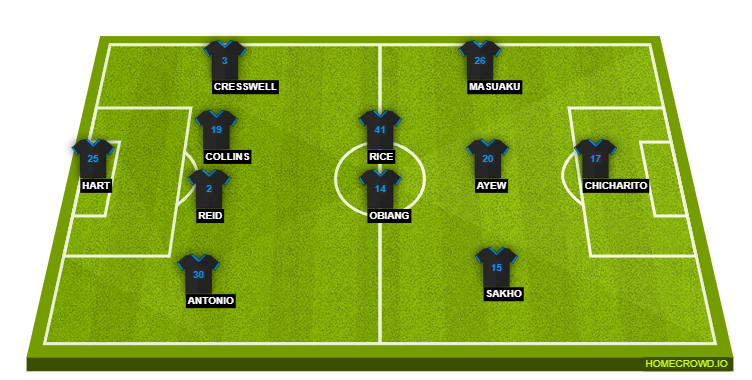 Will he set things right this time around? (Photo courtesy – Bryn Lennon/Getty Images)

A goal on Tuesday could do wonders for his own personal form as well, which has petered out after a strong start to the season, and with his place in the side at risk.

London derbies this season have usually been quite close, with the supposed minnows often springing a surprise or two. West Ham United have been the biggest proponents of the latter, having already beaten Tottenham and Chelsea in two different competitions this season. Will Arsenal be third time lucky, as far the Big Six sides are concerned?

With Arsene Wenger likely to play a heavily rotated side, quality might be in short supply, especially from midfield. West Ham, on the other hand, have the risk of fatigue hanging over their head, with most of his players often playing three games in a week.

That could eventually be a factor, which is why The Hard Tackle is going with a narrow 2-1 win for Wenger & co. The Hammers could produce another shock result too, and it is definitely going to be a closely contested affair.