All roads lead to next weekend’s eagerly awaited El Clasico, when the La Liga title run can take a definitive turn. Before the big game though, there’s the small matter of Deportivo La Coruna to tackle for Barcelona, who will look to stretch their lead over Real Madrid to 11 points on Sunday.

Barcelona have been extremely strong in the first half of the season, with no team managing to get the better of them in any competition thus far. In La Liga, the Blaugrana have a healthy five-point lead at the top of the table, with bitter rivals Real Madrid a further three points away.

Deportivo La Coruna, on the other hand, are battling to remain in the Spanish top flight yet again as they continue to be mired in the lower reaches of the league. The Galicians are just one place and three points outside the drop zone, with their win over Leganes last weekend ensuring their breathing room remained intact.

The corresponding fixture last season ended in an emphatic 4-0 win for Barcelona, with Rafinha scoring a first half brace. Ahead of their latest meeting on Sunday, The Hard Tackle takes a closer look at the encounter.

Everything seems to be going right for Ernesto Valverde at the moment. Apart from the positive results on the field, the injury problems are easing up for the Barcelona boss as well, with just two players on the treatment table ahead of the visit of Deportivo La Coruna on Sunday.

Gerard Deulofeu (knee) and Samuel Umtiti (hamstring) are the only players unavailable due to their respective injuries, with the latter’s problem the only concern for Valverde. But, Javier Mascherano is available again after recovering from a hamstring injury, providing the Barcelona boss with a third central defensive option.

The veteran Argentine is only likely to be on the bench for this game though, with Thomas Vermaelen and Gerard Pique combining at the heart of defence. Meanwhile, there’s more good news in the form of Rafinha and Ousmane Dembele resuming light training.

While the duo are still some way off being completely match fit, they are taking all the steps in the right direction to make themselves available for next weekend’s El Clasico. But, Andres Iniesta is likely to return after completely recovering from a calf injury.

While Valverde has very few pressing injury concerns hampering his preparations, Cristobal Parralo, who recently replaced Pepe Mel at the helm at Depor, has a few players on the sidelines, with several struggling to shrug off minor injuries.

Bicho (shoulder), Gerard Valentin (hamstring) and Federico Cartabia (hernia), while a number of other players are doubtful for the game, including Raul Albentosa (knee),Costel Pantilimon (back) and Luisinho (hamstring).

Guilherme dos Santos Torres is a minor doubt as well, but the Spaniard should be available to start in the pivot alongside captain Celso Borges. Up front, fan favourite Lucas Perez will look to end his goal drought and add to his four goals of the season to help his spring up an unlikely surprise. 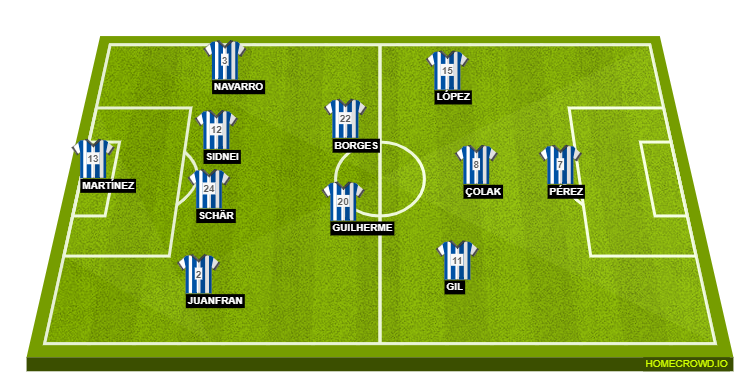 Clawing his way back to form. (Photo courtesy – Fotopress/Getty Images)

After a horrible start to the season, things are starting to take a turn for the better for Luis Suarez, who has scored in each of his last two league outings. With a struggling Deportivo side visiting on Sunday, the Uruguayan will be eager to continue finding his way back to top form.

The same is all the more crucial with the clutch El Clasico fixture beckoning only six days later. Lionel Messi will need all the support he can in that game, and an in form Suarez may just prove to be a difference, although it will all start with the game on Sunday.

It’s a classic case of David vs Goliath on Sunday as Deportivo look to overcome the biggest of odds to end Barcelona’s unbeaten run. On paper, only one result seems to be acceptable, and on the field too, the hosts should have little trouble beating the strugglers.

The Hard Tackle, thus, predicts a comfortable 3-0 win for Ernesto Valverde & co. to approach El Clasico with all the momentum in their favour, although Real Madrid might be buoyed by their Club World Cup triumph too.