The December frenzy continues in England, with Gameweek 18 of the Premier League. In North London, Arsenal will be glad to return to home comforts as they look to end their winless run when they welcome a struggling Newcastle United side to the Emirates on Saturday.

The Gunners have plummeted down to seventh on the Premier League table after a run of three games without a win. Two of these results have been away draws, meaning their record on the road reads two wins out of nine. Their home form has been fantastic though, with seven wins in eight – the only failure coming two weeks ago against Manchester United.

Newcastle, on the other hand, seem to have lost their way in recent weeks, having failed to win any of their last eight games. Seven of these games have ended in losses, as a result of which the Magpies have dropped perilously close to the relegation zone, with just one point separating them and 19th placed West Ham United.

Arsenal were the victors the last time these two sides met, with Laurent Koscielny scoring the only goal in the match midway through the second half. Ahead of their latest meeting on Saturday, The Hard Tackle takes a closer look at the encounter.

The injury woes have eased up for Arsene Wenger, who has just two pressing fitness problems to deal with ahead of the visit of Newcastle on Saturday. Santi Cazorla is a long-term absentee due to a long-standing Achilles injury.

Apart from the injury riddled, Aaron Ramsey (hamstring) and Theo Walcott (groin) are on the sidelines due to their respective problems. In Ramsey’s absence, Jack Wilshere will hope to extend his run in the first-team, after starting for the first time in the Premier League against West Ham on Wednesday.

Meanwhile, Shkodran Mustafi returned to training on Friday, and is in contention to start against the Magpies. Wenger is unsure whether to take a risk by starting the German centre-back though. His compatriot Per Mertesacker could return to the starting lineup, if he is not fit enough.

The Arsenal boss is also likely to revert to a back-three, with his side looking extremely vulnerable on the counter with a back-four, and Sead Kolasinac is also expected to return after being rested in the midweek game.

Rafael Benitez has a couple of players missing ahead of Saturday’s tie, with Aleksandar Mitrovic out with back injury. But, the Newcastle boss will be without Jonjo Shelvey, who has incurred a second suspension this season following his twin bookings against Everton on Wednesday.

In Shelvey’s absence, Mikel Merino should start alongside Arsenal academy graduate Isaac Hayden in the midfield pivot. Joselu is also likely to return to the starting lineup, with Dwight Gayle likely to drop back into the support striker role.

There is a major positive news in the form of Paul Dummett being available for the first time since the opening day of the campaign following a hamstring injury. While the left-back is unlikely to be fit enough to start, he could make an appearance on the bench.

Jamaal Lascelles will be the man leading out the visitors on Saturday, in what will be his second game upon his return from injury. Christian Atsu will be hoping to retain his place in the starting lineup ahead of Jacob Murphy. 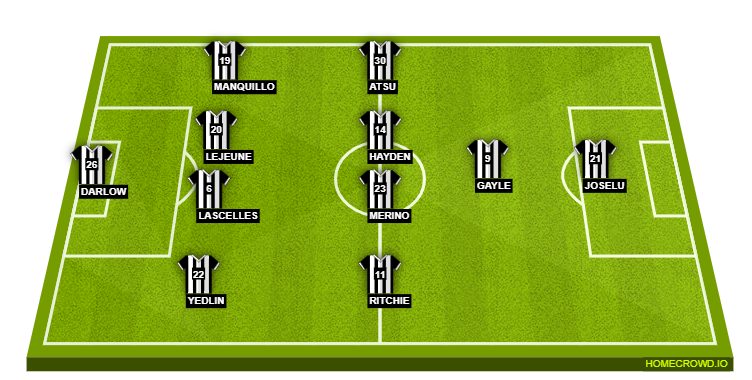 The elusive moment finally arrived earlier this week when Jack Wilshere was handed his first Premier League start of the season. With Aaron Ramsey expected to be sidelined for upto four weeks, the golden opportunity is at hand for the Englishman to cement his place as far as league football is concerned.

His presence in midfield will not just amp up the creativity quotient in Arsene Wenger’s side, but also help Mesut Ozil remain around the Newcastle box instead of dropping deep to receive the ball. If he can strike good understanding with the German and Granit Xhaka, Arsenal should be well on their way to return to winning ways.

It’s back to home comforts for Arsenal. They may have lost their last game at the Emirates, but it was only after David De Gea produced a goalkeeping masterclass. Apart from that one blip, the Gunners have been imperious at home, with a perfect record in their first eight home games.

Newcastle, on the other hand, just can’t get a point, let alone three points, with goals hard to come by as well. Rafael Benitez’s men look bereft of confidence and Arsene Wenger couldn’t have picked a better game to return to winning ways. We predict Arsenal to be comfortable on Saturday, winning this game 2-0.