We’re fast approaching the midway stage of the season in the Premier League as Gameweek 18 draws closer to its end. At the south coast of England, Liverpool will be aiming to overturn a mini run of winless results when they are welcomed to the Vitality Stadium by AFC Bournemouth on Sunday.

The hosts have seen their form drop to an extent in recent weeks, having failed to win any of their last five games, which has dropped them to 14th on the Premier League table. The loss to Manchester United on Wednesday dropped them perilously close to the drop zone, with just two points separating them and 19th placed West Ham United.

Liverpool, on the other hand, have dropped the ball slightly in the previous week, with two successive stalemates pushing them out of the Top 4, albeit on goal difference. The Reds will have a chance to enter the Champions League spots once again if Tottenham drop points at Manchester City on Saturday.

The corresponding fixture last season captured the imagination of Premier League buffs, with the hosts mounting a stirring comeback from 3-1 down to beat Liverpool 4-3 in injury time. Ahead of their latest meeting on Sunday, The Hard Tackle takes a closer look at the encounter.

Last season’s come-from-behind 4-3 win was the catalyst for a top half finish for Eddie Howe & co., and the manager would be hoping to snatch three points again on Sunday. And ahead of the visit of the Reds, there is very little hampering the preparations of the Bournemouth boss, with just three first-team players unavailable.

Brad Smith (hip), Adam Federici and Tyrone Mings (both back) are the players on the treatment table, and with only the latter being a regular, Howe will not be bothered too much. Adam Smith, Steve Cook and Harry Arter are one caution away from suspension, and will have to be wary for two more games.

The major headache for Howe will surround the selection of the front men, with Joshua King, Jermain Defoe, Callum Wilson and Benik Afobe his options. With Wilson failing to make a mark against Manchester United on Wednesday, Defoe might just get the nod, with King playing the role of a support striker. 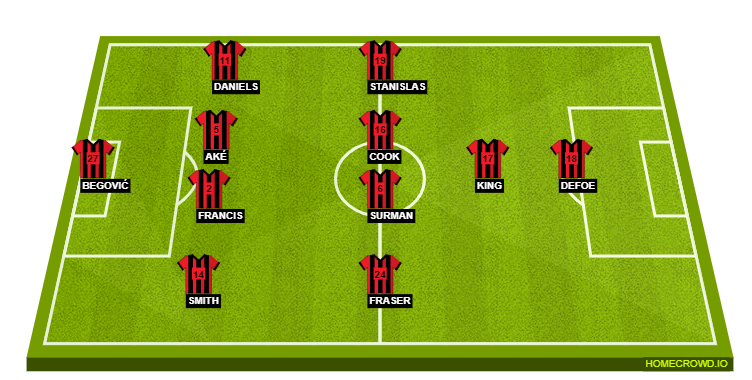 While Howe does not have any pressing injury concerns plaguing his team selection, Jurgen Klopp has no such luxury ahead of the trip to the south coast. In fact, the Liverpool boss could be without as many as seven first-team players when he visits the Vitality Stadium with his men on Sunday.

Three players are certain to miss the game, with Alberto Moreno (ankle), Joel Matip (adductor) and Nathaniel Clyne (back) on the treatment table, and only likely to return following the turn of the year. Emre Can will be unavailable too as he serves a one-match suspension.

Joe Gomez, James Milner and Andrew Robertson are all struggling with knocks, and are fighting to shrug those problems off to make themselves available. But, Daniel Sturridge is a major doubt due to a hamstring niggle, and is unlikely to feature on Sunday.

One player who is set to make a return to the matchday squad is Adam Lallana, with Klopp confirming that the Englishman should be “ready for the squad at least”. Simon Mignolet is expected to start after missing the game against West Brom due to a swollen ankle.

Meanwhile, Klopp should also hand starts to each of the ‘Fab Four’, with Liverpool not scheduled to play a midweek game, when the Carabao Cup fixtures will be played. With all four starting, the Liverpool boss would be hoping his side’s profligate ways are a thing of the past.

After ending 2016-17 as one of the league’s top scorers, it was expected that Defoe was just the signing to help Bournemouth remain a Top 10 team in the English top flight. But, things haven’t been easy for the veteran striker this season, having managed just three goals in 14 Premier League outings.

His last two performances, though, have shown that a turnaround may be in the offing. Liverpool are a side he has enjoyed playing against of late, having found the back of the net thrice in three league games. If he can continue this run on Sunday, Bournemouth may well be on their way to claiming a shock win over the Reds once again.

A fine winning run has long come to an end for Liverpool, although they are still unbeaten over the last two months. But, recent games have seen them squander some fantastic chances away, and they just can’t afford that on Sunday.

Bournemouth may be going through a bad patch, but they create plenty of chances at home, meaning Liverpool will have to take theirs well. If Jurgen Klopp decides to start his ‘Fab Four’ on Sunday, his side should have enough quality to get the win. The Hard Tackle predicts a close shave for Liverpool – 2-1.