Manchester City will be bidding to create more history on Wednesday, when they travel to the Liberty Stadium to take on Swansea City.

Manchester City have been in some record breaking mood recently, and they will be looking to break more on Wednesday. The Citizens will aim to create the longest winning streak in Premier League history when Swansea City welcome them at the Liberty Stadium.

The visitors extended their lead atop the table over the weekend as they narrowly beat neighbours Manchester United 2-1 at Old Trafford. The win helped Pep Guardiola’s men stretch their lead to eleven points at the top of the Premier League, while also creating the record of successive wins in a single campaign.

While Manchester City have been on a tear so far this season, Swansea are on the other end of the spectrum, having struggled once again. The Swans are in the relegation quagmire, with just Crystal Palace below them in the Premier League table.

The corresponding fixture last season ended in a 3-1 win for Manchester City as Sergio Aguero scored a brace to inspire his side to grab all three points. Ahead of the latest meeting between the two sides, The Hard Tackle takes a closer look at the encounter.

While Paul Clement and his Swansea side have been troubled by a multitude of problems on the field, there’s very little frustrating the manager as far as the team news is concerned, with just two players on the sidelines.

The major absentee is Wayne Routledge, seemingly on a comeback trail at the club, which has been halted temporarily after the player sustained a muscle injury in the win over West Bromwich Albion on Saturday.

Kyle Bartley is the other player unavailable, although the Englishman is no longer on the treatment table. The defender has returned to training after a long-term knee injury, but the game has come too soon for him as he is still working his way towards peak fitness.

Federico Fernandez is back in contention after being involved in the matchday squad against West Bromwich Albion over the weekend. He will be among a number of players who would be hoping to return to the starting lineup on Wednesday. 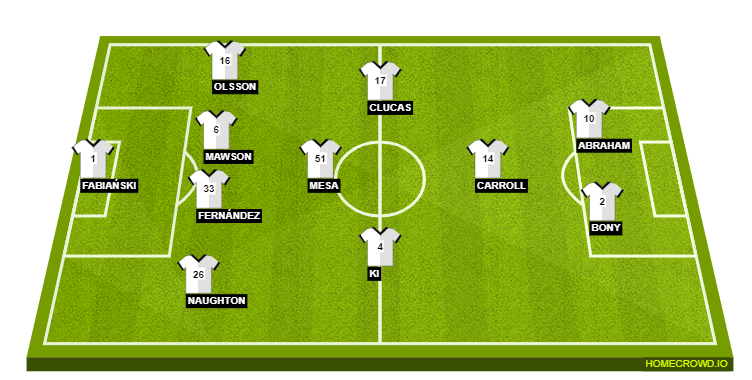 Like Clement, Pep Guardiola does not have a lot of players on the treatment table ahead of the trip to the Liberty Stadium. But, the Manchester City boss does have a few concerns, particularly at the heart of his side’s defence.

Captain Vincent Kompany has joined John Stones (hamstring) and Benjamin Mendy (knee) on the sidelines. The Belgian defender will not be a part of the traveling squad to South Wales due to a muscular injury, leaving Guardiola with just Nicolas Otamendi and Eliaquim Mangala as his central defensive options.

Alternatively, Guardiola could also deploy Fernandinho at the heart of defence alongside Otamendi, although there’s a chance that the Brazilian could be rested so as to save him from the risk of suspension, with the player just one booking away from a one-match ban.

Up front, Sergio Aguero is likely to be recalled after not featuring in the Manchester derby on Sunday. Ilkay Gundogan is in line for a rare start as well, if Fernandinho is rested on the night.

The smile is back, and so are the goals. (Photo courtesy – Catherine Ivill/Getty Images)

From Swansea City to Manchester City and back to Swansea, via Stoke City, it has been quite a journey for Wilfried Bony. His stint at Manchester City was nothing short of a struggle, but he’s slowly starting to rediscover the form that earned him the move to Etihad in the first place.

Bony has now scored two goals in two games – as many as he did in his last 28 games – to get back in form at just the right time. With his former side visiting the Liberty Stadium on Wednesday, emotions might be running high, and if he gets three – or more – in three, a shock could be on the cards.

Swansea’s form has been on the rise in recent weeks, but with league leaders, the unstoppable Manchester City visiting on Wednesday, a win – or even a draw – seems to be a tall order. Pep Guardiola has a wealth of options at his disposal, with loads of quality coming from the bench.

The gulf in class between the two sides should, thus, prove to be too much for Paul Clement & co. The Hard Tackle predicts a comfortable 3-1 win for Manchester City.