Liverpool will be looking to continue their unbeaten run when they host West Bromwich Albion at Anfield on Wednesday.

The midway stage of the season is fast approaching as the busy December action continues in the Premier League. At Anfield, Liverpool will be aiming to move on from the disappointment of the late draw in the Merseyside derby when they welcome West Bromwich Albion on Wednesday.

Despite dropping points against bitter rivals Everton over the weekend, the Reds have been going through a fine run of form, with their unbeaten run now ten-game long. With their last defeat coming way back in October, Jurgen Klopp’s men have been on the ascendancy, only four points off second place on the league table.

West Brom, on the other hand, are in the midst of a miserable run of form, with their last win coming way back in August. The Baggies are now on a 15-game winless run, and have plundered into the relegation zone following Crystal Palace’s 2-1 win over Watford on Tuesday.

The corresponding fixture last season ended in a 2-1 win for Liverpool, although the Reds were given some nervy moments in the dying stages of the match thanks to Gareth McAuley’s late goal. Ahead of their latest meeting on Wednesday, The Hard Tackle takes a closer look at the encounter.

Jurgen Klopp has a few pressing injury concerns ahead of the visit of West Brom on Wednesday. The Liverpool boss will definitely be without five first-team players due to various injury concerns.

Adam Lallana has returned to training following his latest setback in recovery from a thigh injury, but is not fit enough to feature against the Baggies. Alberto Moreno (ankle) and Joel Matip (thigh) are on the treatment table, with neither player any closer to returning to full training.

In the absence of Moreno, Andrew Robertson is likely to continue on the left side of defence, while Matip’s void should be continued to be filled by Ragnar Klavan and Dejan Lovren. Nathaniel Clyne (back) and Adam Bogdan (ACL) are long-term absentees, who will only be available in 2017.

Klopp also mentioned in his pre-match press conference that Mohamed Salah was taken off early in the Everton game because of a slight niggle in his hamstring. The Liverpool boss is hopeful of the Egyptian’s recovery, but it could be touch and go.

Two players who seem certain to return to the starting lineup are Philippe Coutinho and Roberto Firmino, while Sadio Mane could be headed the opposite way towards the bench as Klopp continues to rotate his men to keep them fresh.

Things haven’t improved much in Alan Pardew’s short reign at West Brom so far, with one point from a possible six. Things haven’t been easy on the injury front either, with several key first-team players sidelined for the manager.

Three players are certain to miss the game on Wednesday, with Craig Dawson (knee), James Morrison (Achilles) and Nacer Chadli (thigh) on the treatment table due to their respective injuries. In addition to the trio, Matt Phillips and Gareth Barry are doubtful for the visit to Anfield as well.

Both players will face late fitness tests to determine their availability for the game, with Phillips recovering from a hamstring injury and Barry returning from a thigh injury. In the absence of the duo, James McClean and Claudio Yacob, respectively, could start. 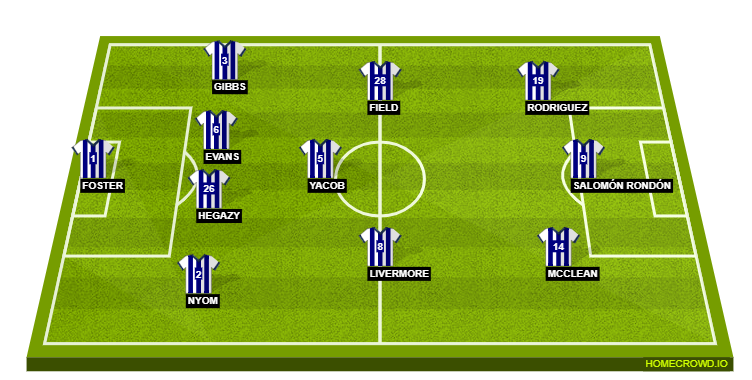 West Brom have been in an absolute mess this season, bar August, especially with goals coming at a premium, that too on the wrong end. Their lowly standing in the table would suggest that defence has been a problem too, but the situation at the back is not exactly grim.

What the Baggies have been guilty of in the last few months is lapse of concentration at crucial moments, with most of their losses coming by the odd goal. In such moments defensive leadership counts for most, which is where Evans comes in.

The former Manchester United man will need to marshall his troops once again in order to inspire his side back to winning ways, lest they risk plunging into more troubled waters.

Two sides on the opposite end of the spectrum meet on Wednesday when Liverpool host West Brom, and it could be a long night for the visitors. The Baggies have been horrendous on the road in 2017, winning just once in 17 attempts, and their transition under Alan Pardew isn’t exactly going smoothly.

Liverpool, on the other hand, are going through a good run, despite the draw in the Merseyside derby as well as constant rotation of the key men. With Coutinho and Firmino expected to start, the Reds should have enough firepower to heap more misery on West Brom, and The Hard Tackle predicts a comfortable 2-0 win.