Chelsea will aim to get back to winning ways when they visit the John Smith’s Stadium to take on Huddersfield Town on Tuesday.

The halfway stage of the busy Premier League season is fast approaching as a frenzied December continues with Gameweek 17. On Tuesday, Chelsea will be looking to bounce back from a shock defeat at West Ham United when they face off against Huddersfield Town at the John Smith’s Stadium.

The hosts have been going through a major slump in form of late, although they did overturn a four-game losing streak over the weekend, when they beat Brighton 2-0 to climb up to 12th on the Premier League table.

Chelsea, on the other hand, were going through a fine run of form before their shock 1-0 loss to West Ham on Saturday, with defeat at the London Stadium ending a seven-game unbeaten streak. The result saw them go 14 points adrift of Manchester City as Antonio Conte conceded defeat in the title race.

Tuesday’s game will be the first ever Premier League meeting between the two sides, and ahead of the game, The Hard Tackle takes a closer look at the encounter.

David Wagner has no fresh injury concerns to deal with ahead of the visit of Chelsea on Tuesday. The Huddersfield boss continues to remain without four first-team players for the game, although he can welcome Rajiv van La Parra back into contention after the Dutchman served his three-match ban.

Among the four players who are absent, there’s a slight bit of good news, with Michael Hefele returning to training this week after recovering from a long-term Achilles injury, but this game has come too soon for him.

Jon Gorenc-Stankovic (cruciate ligament rupture) and Philip Billing (ankle) remain on the treatment table though, with both players expected to return next month. Kasey Palmer is the final player unavailable for Wagner as he is ineligible to face his parent club.

The returning van La Parra, meanwhile, might have to bide his time on the bench to begin with, with Collin Quaner performing well in his absence.

The key man for the hosts will be record signing Steve Mounie, who announced his return from injury with a fine brace against Brighton. The Beninese striker will have to lead the line in a similarly effective fashion to help his side to a shock win on Tuesday. 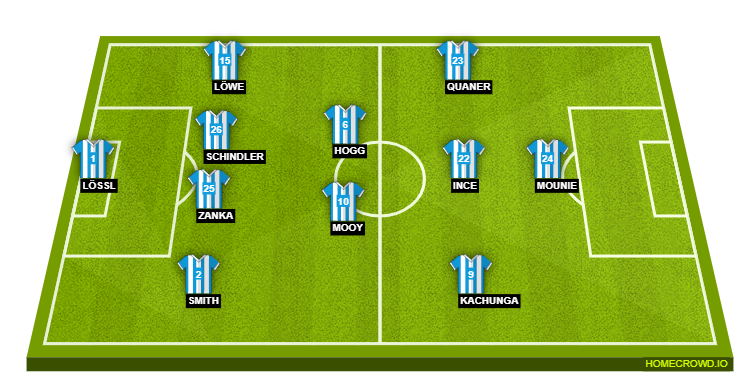 Antonio Conte has been dealt a major blow ahead of the trip to the John Smith’s Stadium on Tuesday. Alvaro Morata has not travelled to Huddersfield with the rest of the Chelsea squad, with the Blues boss informing that he is struggling with tiredness and a back problem.

In his stead, Michy Batshuayi could be the man to deputise as the number nine, unless Conte decides to deploy Eden Hazard in the false nine role. Tiemoue Bakayoko could be one of the casualties from the West Ham defeat, with his form quite concerning for the Chelsea manager.

The man replacing him could be Danny Drinkwater, with the English midfielder recovering from the illness that kept him out of action last weekend. Alternatively, Willian or Pedro could come in too, if Conte decides to amp up the attack.

David Luiz remains on the sidelines though, as he continues recovering from a knee injury, meaning Andreas Christensen is likely to continue at the heart of the back-three. But, Gary Cahill could make way for Antonio Rudiger, with Victor Moses in contention to start at right wing-back.

Things have not been easy for Batshuayi at Chelsea since his move from Marseille last year. After playing deputy to Diego Costa last season, he has had to bide his time again this campaign, playing second fiddle to Alvaro Morata.

However, his own form hasn’t inspired much confidence either, failing to capitalise on the few chances that have come his way. With Morata sidelined with a back injury, the Belgian has another opportunity to make an impression on Conte, and a strong, match winning performance on Tuesday could go a long way.

Chelsea’s bid to retain their Premier League crown seems to have ended after Antonio Conte admitted defeat on Saturday, but things are still evenly poised in the race to finish in the Top 4. With Manchester United just three points ahead, a second place finish is not out of the question.

But, the trip to Huddersfield will be quite the tricky one as the Blues look to return to winning ways. The Terriers have troubled the best of teams at the John Smith’s Stadium and the Blues will have to work hard for their goals. A close game is on the cards, although we feel the visitors might just nick a win in the end.