The familiar foes are set to take on each other on Sunday as Jose Mourinho’s Manchester United host Pep Guardiola’s Manchester City at Old Trafford.

The biggest Premier League game of the season so far is here, as Manchester United get set to play hosts to neighbours Manchester City at Old Trafford on Sunday. The match is reportedly at risk of cancellation due to inclement weather, but all signs point towards this being a spectacle, if the fixture does take place.

The hosts have rediscovered some of their best form in recent weeks, winning each of their last four games to maintain their eight-point deficit to the Citizens. Jose Mourinho’s men will be coming into this match with a great deal of confidence, having backed up their victory over Arsenal last weekend, with a comeback win over CSKA Moscow in Europe.

Manchester City, on the other hand, have shown signs of losing some steam in recent weeks even though they have stitched a 13-game winning run in the Premier League. Pep Guardiola’s men will be looking to return to winning ways on Sunday after losing their first game on the season to Shakhtar Donetsk.

The corresponding fixture last season saw Manchester City beat their neighbours 2-1, which was coincidentally the last time Jose Mourinho’s men lost at Old Trafford. Ahead of their latest meeting on Sunday, The Hard Tackle takes a closer look at the encounter.

It’s one step forward and one step back for Jose Mourinho as far as roster issues are concerned. While the Manchester United boss is set to welcome a few players back into his matchday squad on Sunday, there is one major absentee, who unavailability has been quite a blow to his preparations for this game.

Paul Pogba will serve the first of his three-match ban against Manchester City after being sent off last weekend versus Arsenal. In the absence of the Frenchman, Ander Herrera is likely to deputise in midfield alongside Nemanja Matic, who is fit enough to start on Sunday.

Alternatively, Marouane Fellaini could be an option as well, provided he clears a late fitness test before the match. Apart from the Belgian midfielder, Phil Jones and Zlatan Ibrahimovic are available, with the former likely to start in place of Marcos Rojo, who has looked slightly rusty upon his return from knee injury.

But, Eric Bailly (groin) and Michael Carrick (calf) are still no closer to making a return, with no time stamp set on their return. The key man, in what is likely to be a counterattacking approach by Mourinho, will again be Jesse Lingard, with his pressing and lung bursting runs.

Like Mourinho, Pep Guardiola has a few pressing concerns to deal with as well ahead of the cross-town trip to Old Trafford on Sunday. As far as the Manchester City boss is concerned, the problems lie in an already depleted defence, with two regular starters major doubts for the encounter.

Vincent Kompany has complained this week of an unknown injury while Fabian Delph has been laid low by illness, and the duo face a late fitness test before the game to determine their availability. With John Stones already on the sidelines, Eliaquim Mangala is likely to start in Kompany’s stead at the heart of defence.

In Delph’s place, Danilo is on standby to start on the left side of defence, with first-choice Benjamin Mendy a long-term absentee due to a knee injury. But, David Silva is fit and available after recovering from a minor knock that had Guardiola worried earlier this week.

With the Spaniard available, City’s attack will certainly feature all of the first-choice players bar any late mishaps, with Gabriel Jesus the unlucky man to miss out. 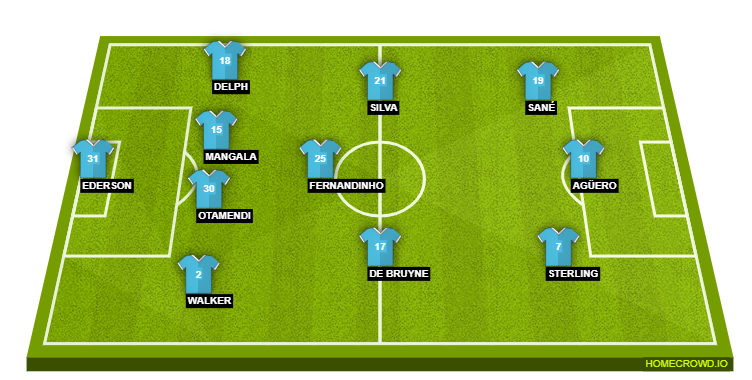 Manchester United are slowly, but surely retracing their way towards their menacing early season form. But, one thing that has distinctly missed from their performances in recent weeks, is defensive assurance, despite the ascendancy of Victor Lindelof of late.

One man who was the catalyst of supreme defensive performances in the first three months of the season was Phil Jones, and he is someone who has been sorely missed at the back. The Englishman couldn’t have timed his return better though, with the league leaders visiting on Sunday.

Up against an in-form Raheem Sterling and the dangerous Sergio Aguero, it will be quite the return game for Jones. But, if he is able to bring that added element of security at the back, Manchester United might just be well on their way to clinching all three points.

It’s the showdown that everyone has been waiting for for months, and it has been set up superbly in the last few weeks. Manchester City have largely looked imperious this season, having only recently started to look vulnerable.

Manchester United, on the other hand, are looking better with each passing game, with their last two results being a massive statement of their intent. On top of that, they have a manager who knows how to get the results he wants in such games, especially at home.

And with the visitors’ defence likely to be depleted further on Sunday, Romelu Lukaku & co. would be licking their chops. Meanwhile, City have records to break, and this is one match that is too close to call, which is why The Hard Tackle predicts a hotly contested 1-1 draw.