Tottenham will be aiming to get back to winning ways and keep up in their bid for a top four finish when they host Stoke City at Wembley on Saturday.

The December frenzy continues this weekend with Gameweek 16 of the Premier League. In London, Tottenham will be desperate to end their miserable run of winless results in the English top flight, when they play hosts to Stoke City at Wembley on Saturday.

The hosts have seen their bid to win the Premier League peter out horribly, with just one win in their last six leaving them well adrift of a place in the Top 4. Mauricio Pochettino’s men currently sit sixth in the table, coming into this game on the back of a 1-1 draw at Watford.

Stoke, too, are going through a poor run of form, having only overturned a four-game winless run last weekend as they beat Swansea City 2-1. But, the win helped them pull clear of the relegation zone – the Potters are currently six points well off the drop zone.

The corresponding fixture last season ended in a 4-0 win for Tottenham, with Harry Kane inspiring the success with a first-half hattrick. Ahead of the latest encounter between the two sides, The Hard Tackle takes a closer look at the encounter.

Pochettino is not just set back by issues on the field, but ones off it as well. The Tottenham manager will be without three first-team players ahead of the visit of Stoke on Saturday, with defence in particular a concern.

Toby Alderweireld had already been out of action for the long-term due to a hamstring injury that will keep him on the treatment table till after the turn of the year. The Belgian defender has now been joined by Davinson Sanchez on the sidelines, with the Colombian defender serving the first of his three-match ban.

In the absence of the duo, Pochettino could revert to back-four, with Eric Dier likely to start alongside Jan Vertonghen at the heart of the Tottenham defence. But, the latter will need to be careful so as to not give Pochettino further problems as his next booking would result in a one-match suspension.

Meanwhile, the Spurs boss is expected to recall a few of his regulars on Saturday, with the likes of Harry Kane, Hugo Lloris, Christian Eriksen and Kieran Trippier set to return to the starting lineup.

Mark Hughes has a couple of pressing concerns to deal with as well ahead of the visit to the capital, and the Stoke City boss will be without three first-team players on Saturday, with Bruno Martins Indi and Jese Rodriguez the key absentees, with Stephen Ireland yet to feature this season due to a fracture leg.

Martins Indi will be unavailable for quite some time after picking up a groin injury last weekend. The Dutch centre-back will now be on the sidelines for eight weeks. Also unavailable, is Jese, who has had to rush home to Gran Canaria to be with his ill baby son.

In Jese’s stead, Peter Crouch should start as the focal point of attack, with in-form duo Xherdan Shaqiri and Eric Maxim Choupo-Moting for company in the front three. Meanwhile, Joe Allen is walking the suspension tightrope, with his next booking set to hand him a one-match ban. 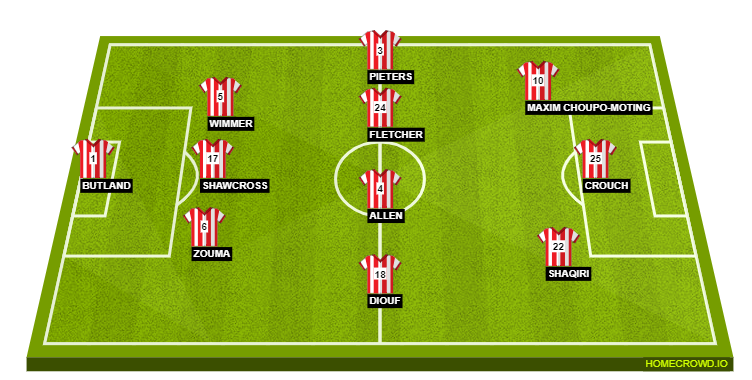 After a flurry of goals in September and October, things have slowed down slightly for Kane, as has been the case for the rest of the Spurs side. Ahead of the visit of Stoke City on Saturday though, the English striker’s return to form is the most imperative among the rest of his teammates.

Going by his recent record, it is easy to see that Kane loves playing against Stoke, having had a hand in seven goals in his last three Premier League outings against Stoke. And if he can manage to reproduce his performance from the corresponding fixture last season, it is not hard to see Tottenham continuing their miserable run on Saturday.

Stoke City have not enjoyed playing against Tottenham in recent seasons, with the North Londoners finding it easy to score past the Potters. But, considering the form that Mauricio Pochettino’s men are carrying into the game, it’s really hard to see them cruise to a win this time around, not to forget their struggles at Wembley as well.

Having said that, the Potters have not been anywhere near their best this season, and their horrendous defensive problems could help Tottenham end their goalscoring woes. A certain Harry Kane might just return to top form as well, and The Hard Tackle predicts a hard-fought 2-1 win for the hosts.