The Champions League Group Stage is set to end this week, with Matchday 6. In Group A, with things still wide open, Manchester United will be bidding to not just confirm their progression to the Round of 16, but also seal top spot, when they play hosts to CSKA Moscow at Old Trafford on Tuesday.

The hosts have found their feet again of late ahead of a busy December, having won each of their last three games, including the 3-1 win at Arsenal. CSKA Moscow, too, are in the midst of a fine run of form, having not lost any of their last six games, building up to Tuesday’s crucial tie with a 6-0 rout of Tosno.

In Europe, things are evenly poised in Group A following Manchester United’s 1-0 loss to FC Basel on Matchday 5. The Red Devils still sit atop the group with 12 points and are the likeliest team to progress, while the visitors are level on points with Basel, although their inferior goal difference puts them at a disadvantage.

The reverse fixture at the VEB Arena, on Matchday 2, ended in a comfortable 4-1 win for Manchester United, with the hosts only able to manage a late consolation goal. Ahead of the latest meeting between the two sides on Tuesday, The Hard Tackle takes a closer look at the encounter.

Jose Mourinho has a few injury concerns to deal with ahead of the visit of CSKA Moscow, with key players still on the sidelines. The Manchester United boss is, in fact, set to be without six first-team players for Tuesday’s tie.

In defence, Eric Bailly (groin) and Phil Jones (thigh), and the duo’s return is eagerly awaited, with Chris Smalling and Victor Lindelof basically playing a game every three days. Up ahead in midfield, Nemanja Matic is set to sit the game out, with Mourinho unwilling to risk the Serb with one eye on Sunday’s derby against Manchester City.

Michael Carrick’s availability is touch and go, with the manager coy on his return from a calf injury on Tuesday. If the match is too soon for the Manchester United captain, Scott McTominay could be given the opportunity to make his second Champions League start, with Ander Herrera likely to be rested as well.

Two players who are certain to start are Paul Pogba and Sergio Romero – the former who will miss the derby and the latter to give some rest to David De Gea – while Zlatan Ibrahimovic will also miss the game.

Meanwhile, Mourinho also added that he will make a raft of changes to provide rest to some players who have been playing regularly, and the likes of Matteo Darmian, Marcus Rashford and Juan Mata are also likely to start, while Luke Shaw is in contention as well.

Like Mourinho, Viktor Goncharenko has a few roster issues troubling him as well. The CSKA Moscow boss could be without as many as five first-team players on the trip to Manchester due to suspension or injuries.

There are a few problems in midfield, with Pontus Wernbloom and Bibras Natcho serving a one-match suspension due to accumulation of yellow cards. Aleksandr Golovin is a suspension risk for the visitors, with the young Russian a booking away from getting a one-match ban.

Georgi Schennikov (ankle) and Aleksei Berezutski (calf) are on the treatment table, and will also be unavailable for the crucial Champions League tie. Finally, Goncharenko is sweating over the fitness of Georgi Milanov, who is recovering from a calf injury.

Meanwhile, the main men for CSKA in pursuit of a shock win on Tuesday will be Vitinho and Alan Dzagoev. The Brazilian forward in particular, has been impressive this season, having scored seven goals to be the top scorer in the Russian Premier League, and he could be a threat for the Manchester United defenders with his striking instincts. 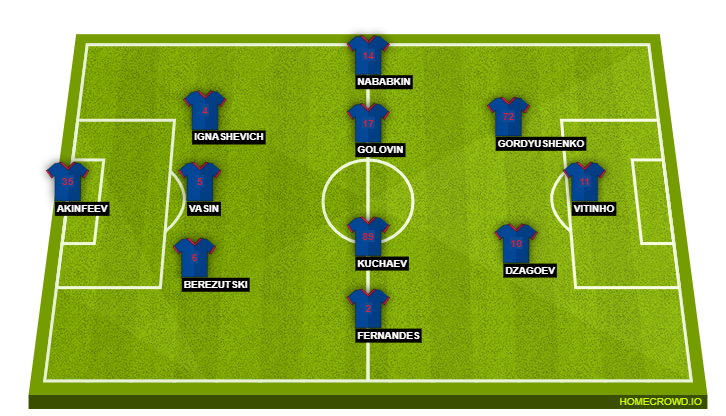 Out to prove a point. (Photo courtesy – Gareth Copley/Getty Images)

It has been a sort of a topsy turvy season for Marcus Rashford, who has gone from a regular in the starting lineup to an impact substitute in the last few games. On Tuesday, he is expected to start, and a solid performance could help him stake a claim for a starting berth in the Manchester Derby on Sunday.

As far as CSKA Moscow are concerned, Rashford’s directness from the left wing will be key for his side, much like how Anthony Martial did in the reverse fixture. If he does perform at top form on the night, clinching top spot will become a mere formality for Manchester United.

The final matchday of the Champions League Group Stage is here, and with things still pretty wide open in Group A, the match at Old Trafford is set up quite nicely. While CSKA Moscow will be looking to go for the kill, and their first ever win over Manchester United, the hosts need just a point to confirm top spot.

Jose Mourinho, though, is unlikely to be satisfied by a mere point, and will be looking to end the Group Stage with a bang, despite a heavily changed side. With that in mind, and with a few players having a point to prove, Manchester United should be able to get all three points on the night. We predict a 2-1 win for the hosts.