Bayern Munich and Paris Saint-Germain will bring down the curtains of Group B proceedings when they meet at the Allianz Arena on Tuesday.

The Champions League Group Stage comes to a close this week with Matchday 6, but not before a clash of the titans. Bayern Munich will play hosts to Paris Saint-Germain at the Allianz Arena on Tuesday, in what will be a high-octane encounter, with top spot on the line in Group B.

The two sides are currently separated by just three points – PSG have won each of their first five games, while Bayern’s only loss came against the Ligue 1 giants on Matchday 2. While Les Parisiens are well in command of Group B, a four-goal win would give the Bavarians the top spot.

Both sides have somewhat of a mixed run of form heading into Tuesday’s clash. While the hosts bounced back from their first loss under Jupp Heynckes last week with a 3-1 win over Hannover, PSG’s fantastic unbeaten run came to an end with a shock 2-1 loss at FC Strasbourg on Saturday.

The reverse fixture at Parc des Princes on Matchday 2 ended in a resounding 3-0 win for PSG that ended Carlo Ancelotti’s spell at Bayern Munich. Ahead of their latest meeting on Tuesday, The Hard Tackle takes a closer look at the encounter.

Jupp Heynckes has a few injury concerns to contend with ahead of the visit of PSG, with four key first-team player sidelined with various fitness issues for Tuesday’s crunch tie. Manuel Neuer (foot), Juan Bernat (muscular), Thiago Alcantara (thigh) and Arjen Robben (thigh) are all sidelined.

Neuer’s void has been filled by Sven Ulreich, and quite impressively so, with the German shot stopper finding his feet after a nervous start to the campaign. Bernat’s absence does not pose a lot of concerns, with Niklas Sule, Mats Hummels and Jerome Boateng at Heynckes’ disposal.

Up front, the Bayern boss seems to have enough cover to fill up the absence of Thiago and Robben, especially following the return of Thomas Muller. Kingsley Coman is expected to start against his former club, while James Rodriguez will definitely make the lineup after Heynckes confirmed the same.

While Heynckes is still coping with a few fitness troubles, Unai Emery can almost boast a clean bill of health, with Thiago Motta the only player on the treatment table due to a knee injury, ahead of the trip to Munich on Tuesday.

In the absence of the Italian, Julian Draxler is likely to continue in midfield, with Marco Verratti and Adrien Rabiot for company in the midfield trio. Emery is also sweating over the fitness of Marquinhos, but the Brazilian defender is expected to feature alongside Thiago Silva at the heart of defence.

Up front, the fearsome trio of Neymar, Kylian Mbappe and Edinson Cavani should start once again. Mbappe, in particular, will be the man under the spotlight, with his form a bit of a concern for the PSG boss. 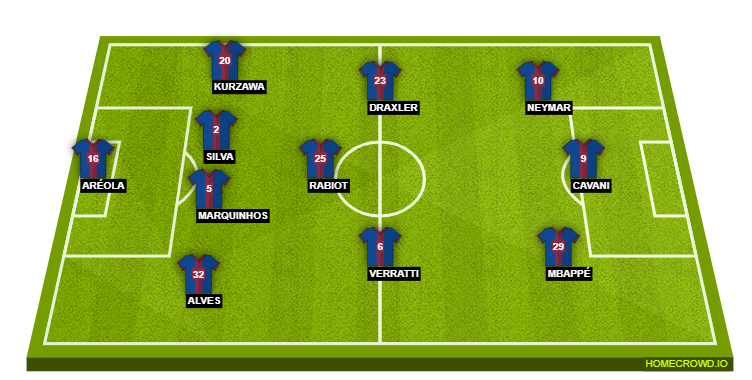 Things seem to be finally working out for James Rodriguez upon his loan move from Real Madrid. After initially struggling to settle into the side. However, upon the arrival of Carlo Ancelotti, coupled with the injury layoffs of Thomas Muller and Thiago Alcantara in succession, he seems to have seized his chance.

The same was evident in the weekend’s game against Hannover, with James flourishing in the free role behind Robert Lewandowski. Against a susceptible PSG defence, his movement, coupled with Muller drifting in could pave the way for a win for his side, and this might just be the game that makes the Colombian’s Bayern career.

What a way to bring the curtains down on an exhilarating Champions League Group Stage, with Bayern Munich and Paris Saint-Germain going head-to-head on Tuesday, PSG were easy victors in the reverse fixture, with the result giving them an upper hand in Group B.

Bayern, though, are a much changed side since then, with the Bavarians looking at their formidable best over the last five weeks. The hosts are unbeaten at home under their new manager, and while PSG are no pushovers, Jupp Heynckes & co. should have enough firepower to get all three points.

The Hard Tackle predicts a hard-fought 2-1 win for Bayern Munich, albeit just falling short of securing top spot in Group B.