Manchester City will look to continue their winning run when they host a struggling West Ham United side at the Etihad on Sunday.

A classic David vs Goliath encounter awaits as Gameweek 15 of the Premier League comes to an end on Sunday. High flyers Manchester City get set to welcome West Ham United to the Etihad, with the East Londoners in desperate need of some inspiration to get their campaign on track.

There has really been very little stopping Manchester City this season, even though the Premier League leaders have seemingly dropped the ball to an extent in recent weeks. Their last two games, in particular, have seen the Citizens leave it really late to claim back-to-back 2-1 wins to maintain their eight-point lead atop the table.

West Ham, on the other hand, have been hapless, conceding the most number of goals in the league so far this season while finding it hard to find the back of the net themselves. David Moyes’ men come into this match on the back of a 4-0 hammering at the hands of Everton, dropping further away from safety in the process.

The corresponding fixture last season ended in a comfortable 3-1 win for Manchester City, with Raheem Sterling inspiring his side to all three points. Ahead of the latest meeting between the two sides on Sunday, The Hard Tackle takes a closer look at the encounter.

While results have been especially good on the field, Pep Guardiola has also had some good luck with respect to injuries, having not been deprived of a lot of players at a time. Heading into the match on Sunday, the Manchester City boss has just two first-team players absent, although defence is a bit of a concern for him.

John Stones (hamstring) and Benjamin Mendy (knee) are long-term absentees for the hosts, with the former’s injury particularly worrisome, if ever so slightly due to Vincent Kompany’s uncertain fitness situation, which leaves the out-of-favour Eliaquim Mangala as the only option beside Nicolas Otamendi.

While there are no other injuries bothering Guardiola, he could soon have some suspension headache with the Manchester Derby just around the corner. Fernandinho and Leroy Sane are one booking away from being banned for a game, and the manager would be hoping they maintain their discipline on Sunday.

As far as the changes are concerned, David Silva and Sane are likely to be recalled, with the latter expected to have recovered from illness. One player who looks certain to keep his place is Raheem Sterling after netting winners in back-to-back games for his side.

While Guardiola has been fortunate enough when it comes to roster issues, the West Ham boss, first Slaven Bilic and now David Moyes, have had a tough time in naming their strongest eleven pretty much all season. And ahead of the trip to Manchester, the Hammers could be travelling without as many as seven first-team players.

Defence is a major concern area for Moyes, with Winston Reid facing a race against time to be fit for the game after hobbling off on Wednesday. With Jose Fonte (ankle) and James Collins (hamstring) sidelined with their respective injuries, the manager will be sweating over the results of the New Zealander’s late fitness test.

If Reid fails to prove his fitness, Declan Rice could be called up to fill in at the heart of defence, with Cheikhou Kouyate a makeshift option as well. Sam Byram (thigh) is the fourth defender on the treatment table, although Pablo Zabaleta is available to play as right-back.

Attack is posing a fair few problems to Moyes as well, with first-choice strikers Andy Carroll (knee) and Javier Hernandez (hamstring) sidelined with their respective injuries. With Andre Ayew struggling to make any sort of impact up front, Diafra Sakho could start as the focal point of attack, with the Ghanaian being deployed as a winger.

Meanwhile, Joe Hart is ineligible to face his parent club due to the terms of his loan deal, and he will be replaced by Adrian in goal. 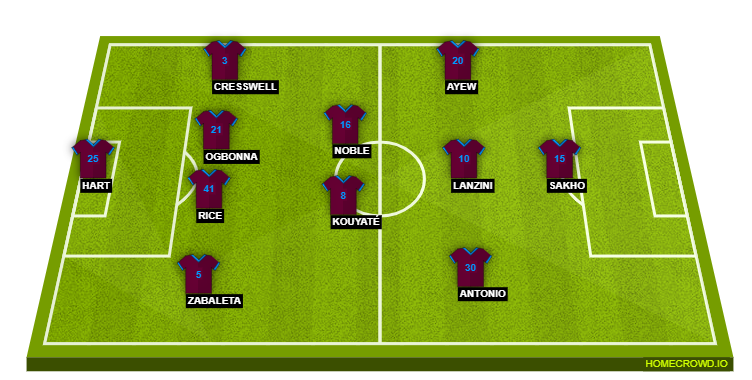 West Ham have just not managed to get going this season, with the threat of relegation all too real now. A lack of leadership has been among the major reasons for what looks like an extended slump in form, considering the wealth of talent that the Hammers can boast of.

That has to be attributed to Mark Noble, who has been quite an asset for the club over the years, but has failed to step up when it matters over the last 18 months or so. With the trip to the unstoppable league leaders beckoning, the veteran midfielder needs to play out of his skin to help his side to a shock result.

Most importantly, with a loss an expected result, a strong and inspiring performance can be an indication that a turnaround is possible ahead of what will be a long and winding season.

The Gameweek’s final game pits two sides that are not only playing completely different battles right now, but are also on the opposite ends of the spectrum when it comes to the respective squad’s confidence.

While there has been little stopping Manchester City, whose self belief has enabled them to mount two stirring narrow wins in the last seven days. West Ham, on the other hand, just got thrashed by an Everton side that hasn’t been much good this season.

So, anything other than a rout on Sunday would come as a major surprise, with Pep Guardiola & co. set to head into the Manchester Derby at least eight points ahead of their neighbours.