Arsene Wenger and Jose Mourinho will renew their rivalry on Saturday as Arsenal and Manchester United get set to face off at the Emirates.

Arsenal and Manchester United prepare to go head-to-head on Saturday, in what is the marquee clash of Gameweek 15. While the Gunners will be aiming to consolidate their place in the top four, Jose Mourinho’s men are aiming to pass the latest test of their title credentials with flying colours.

The hosts have turned their form around drastically in recent weeks, winning five of their last six games in the Premier League to climb up to 4th in the table. The 5-0 win against Huddersfield on Wednesday was another reminder of just how confident Arsene Wenger’s men have been of late.

Manchester United, on the other hand, have picked up their form as well, winning each of their last three games, following the disappointing 1-0 loss to Chelsea. The Red Devils remain second in the table, although the 4-2 win at Watford was a sign of an upturn in form.

The corresponding fixture last season ended in a popular 2-0 win for Arsenal, with a disastrous three-minute period spelling doom for Manchester United. Ahead of their latest meeting between old foes Mourinho and Wenger, The Hard Tackle takes a closer look at the encounter.

To the surprise of many, Arsene Wenger is the Big Six manager with the fewest injury concerns heading into the busy festive period. The Arsenal boss is without just two first-team players, although the absence of Alexandre Lacazette will be a big blow for the hosts.

The French striker picked up a groin injury in the match against Huddersfield, and Wenger confirmed that he will miss the game on Saturday. In his absence, Olivier Giroud is likely to line up as the focal point of the Arsenal attack.

While the likes of Alexis Sanchez (hamstring), Theo Walcott (illness) and Alex Iwobi (foot) are doubtful for the game as well, the trio should be fit enough to make the matchday squad. The presence of Sanchez is particularly vital, with the Chilean forward reigniting his fearsome partnership with Mesut Ozil.

Santi Cazorla is the only other absentee apart from Lacazette, with the Spaniard sidelined with a long-term Achilles injury. Other than Lacazette, Wenger is likely to name a full-strength starting lineup, with Jack Wilshere likely to start another league game on the bench.

Just when it looked like Jose Mourinho would soon have a clean bill of health to boast, he has received a setback ahead of the crucial trip to the Emirates. The Manchester United boss could be without as many as five key first-team players when he names his matchday squad on Saturday.

Eric Bailly (groin), Phil Jones (thigh) and Michael Carrick (calf) continue to remain on the treatment table, with no word still on when any of them will return. Marouane Fellaini will miss the trip to London as well, with the Belgian midfielder struggling with a recurrence of his knee injury.

The most concerning situation is that of Nemanja Matic though, with Mourinho sweating over the fitness of the midfielder. The Serb limped off in the second half of the Watford game with what seemed to be a hamstring injury, and the Manchester United boss will leave it late before taking a decision on his involvement.

As far as tactics are concerned, Mourinho is likely to stick to the formation that worked wonders at Watford as that will also help him match the numbers in midfield with his counterpart. Meanwhile, Jesse Lingard could retain his place in the starting lineup on Saturday, with Juan Mata not looking at his best. 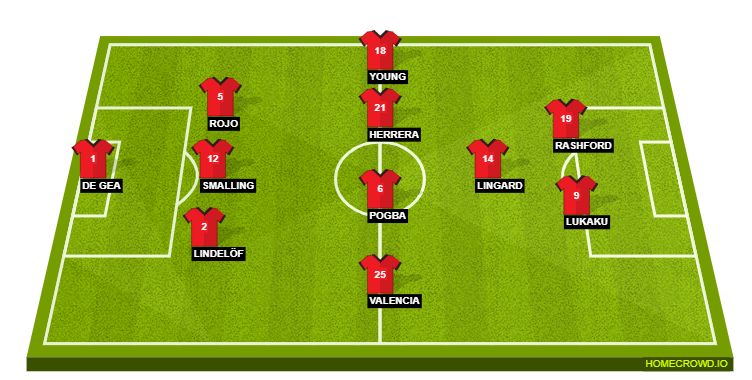 After a tough start to life as a Manchester United, Victor Lindelof is starting to show just why Jose Mourinho shelled out the big bucks on him. With Eric Bailly and Phil Jones out injured, the Swede has received a longer run in the first-team, starting each of the last three league games.

His performance over these matches has been increasingly impressive, with fans even comparing him with a certain Nemanja Vidic. That is quite the comparison, and the same would be reinforced further if he manages to keep Alexis Sanchez & co. quiet on Saturday.

Only time will tell if he can continue his fine run of form against a strong Arsenal attack, but Lindelof certainly looks up to the task at hand going by his recent outings.

Premier League moves into a busy month of December, and what better way to herald the start of the month than with the return of an age-old rivalry. Arsenal vs Manchester United has always been a game to look forward to, and with the Wenger-Mourinho rivalry as another subplot, things are spiced further.

Mourinho’s recent away record against “Big Six” opposition does not inspire a lot of confidence though, with the Portuguese failing to win on the road against these sides for more than three years. If Matic is unable to regain fitness, it won’t be a surprise to see Manchester United shut up shop once again in a big away game.

Paul Pogba and Mesut Ozil, meanwhile, will be the catalysts for their respective sides on Saturday, and their form will go a long way in dictating the fortunes of their sides. This one is too close to call, which is why The Hard Tackle is going with a keenly contested 1-1 draw.