Another week, another outfit trying to stop a rampaging Manchester City outfit in their tracks. The latest side trying to deny Pep Guardiola & co. maximum points will be Southampton, as they pay a visit to the Etihad on Wednesday in a Gameweek 14 encounter.

There’s been no stopping Manchester City this season, with Everton being the only side that has managed to steal some points from the unbeaten Citizens. In the Premier League, the club are on a club-record 11-game unbeaten run with the latest result being a come-from-behind 2-1 win over Huddersfield.

Southampton, on the other hand, have blown hot and cold so far this season, having struggled to string together a consistent run of results. Their performance last weekend though, suggests a slight upturn in form, after Mauricio Pellegrino’s men cruised to a 4-1 win over Everton to get back into the top ten.

The corresponding fixture last season was a keenly contested affair, with Manchester City coming back from behind to hold the Saints to a 1-1 draw. Ahead of their latest meeting on Wednesday, The Hard Tackle takes a closer look at the encounter.

Pep Guardiola does not have a lot of injury concerns on his hands ahead of the visit of Southampton. But, defence is a bit of a concern for the Manchester City boss though, with John Stones (hamstring) and Benjamin Mendy (knee) sidelined with long-term injuries.

The absence of Stones, in particular, poses a few problems, with Vincent Kompany’s fitness struggles being well documented. While the Manchester City captain has regained full fitness, Guardiola would be constantly sweating over his condition.

Meanwhile, the manager is also likely to make a few changes to keep his side in optimal condition in the busy festive period, also keeping in mind the crucial Manchester Derby next weekend. Thus, the likes of Gabriel Jesus, Bernardo Silva and Ilkay Gundogan are likely to return to the starting lineup on the night.

Unlike Guardiola, Mauricio Pellegrino has no major pressing fitness problems to contend with ahead of the trip to Manchester. The Southampton boss is missing two first-team players, but neither Matt Targett nor Jeremy Pied regular members of the side.

Mario Lemina’s absence from injury has been a huge positive, and the former Juventus midfielder could start on Wednesday alongside Oriol Romeu to add some steel in midfield. The Gabonese’s return after a month-long absence might also see captain Steven Davis start in an advanced role, as a result.

Up front, Charlie Austin finally seems to have given Pellegrino a solution to his side’s goalscoring woes, and after scoring a brace on his return to the starting lineup, he is expected to start again on Wednesday.

In goal, Fraser Forster needs to rediscover his best form in order to give the Saints even a glimmer of hope, having been quite disappointing so far this season. 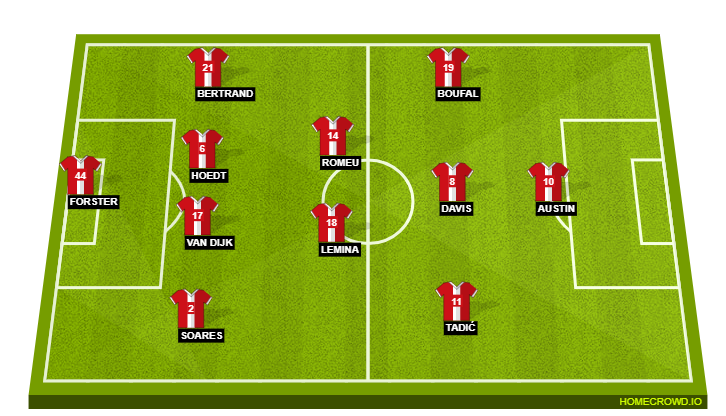 The smile is back, and so are the goals. (Photo courtesy – Steve Bardens/Getty Images)

Things haven’t been easy for Austin in 2017. The striker had a fantastic start to his Southampton career last season before a shoulder injury put paid to his run. The arrival of Manolo Gabbiadini in January has forced him to share game time, with Shane Long in the fray as well.

Upon his return to the starting lineup though, Austin seems reinvigorated, ready to wrest his place as the first-choice striker. His record as a starter in the Premier League is even more compelling, with the player having a hand in eight goals in his last 11 starts (seven goals and an assist).

What’s baffling is that Austin hasn’t started back-to-back Premier League games since December 2016, although the aforementioned record suggests that he should. If he starts on Wednesday, and manages to extend that tally, Southampton could give Pep Guardiola & co. a few scares.

The Manchester City train continues to roll on with magnificent efficiency. Huddersfield came close to halting them in their tracks last weekend, but the sheer attacking quality of Pep Guardiola’s side helped them prevail eventually.

Can Southampton stop them? The evidence from last Sunday suggests that they may be starting to finally find their feet under the tutelage of Mauricio Pellegrino, but the Citizens, at the Etihad no less, are a wall too high to climb for them, bar an uncharacteristic slump by the hosts.

With David Silva and Kevin De Bruyne dictating play from midfield, Guardiola & co. are likely to set a new club record of successive wins in the Premier League on Wednesday. The Hard Tackle predicts a comfortable 3-1 win for the hosts.