Tottenham will be aiming to get back to winning ways when they travel to the King Power Stadium to take on Leicester City on Tuesday.

The action doesn’t stop in the Premier League, with Gameweek 14 commencing just two days after the end of last weekend’s action. At the King Power Stadium, Tottenham will look to get their campaign back on track when they face Leicester City on Tuesday.

The hosts have found some semblance of stability upon the arrival of Claude Puel, having lost just once since his appointment. The decent run of results has pulled them away from the relegation zone, and the Foxes are just two points away from a place in the top half of the Premier League table.

Tottenham, on the other hand, have slipped up massively over the last one month, with just one win from their last four games dropping them out of the Top 4. The visitors come into this game on the back of a morale sapping 1-1 draw against West Bromwich Albion at Wembley.

The corresponding fixture last season ended with a resounding 6-1 win for Mauricio Pochettino’s men, with four-goal Harry Kane in some rampaging mood. Ahead of the latest meeting between the two sides, The Hard Tackle takes a closer look at the encounter.

Leicester have been only looking up since the appointment of Claude Puel last month, and the French manager’s job has been made easier due to very few injury concerns bogging him down in his preparation for games.

Ahead of the visit of Tottenham, the Leicester boss is without just two first-team players, with Robert Huth (foot) and Matty James (Achilles) the only players on the treatment table. But, neither player’s absence has hampered the side much.

Huth’s absence has been adequately made up by summer signing Harry Maguire, who has taken no time to adapt to his new surroundings. In midfield, Vicente Iborra has had not trouble in finding his feet in the Premier League.

Meanwhile, a four-pronged attack is the strength of Puel’s side, with Demarai Gray, in particular, being the most dangerous player with his pacy outlet. While Jamie Vardy’s recent form is a concern, the England international might fancy his chances against a Spurs defence that has not been solid enough of late. 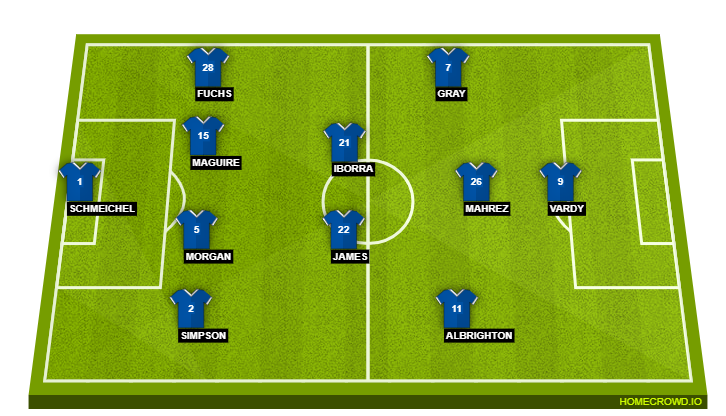 Mauricio Pochettino, too, does not have a lot of fitness problems to contend with ahead of the trip to Leicester, with just two players on the sidelines. Erik Lamela was the latest player to become available, and the Argentinean winger is likely to feature on Tuesday, having built up his fitness in reserve games.

Toby Alderweireld (hamstring) and Victor Wanyama (knee) are the players sidelined, with the former’s place in the back-three being taken up by Eric Dier. Danny Rose is in contention to start on Tuesday, after being overlooked once again last weekend, with Pochettino expected to make rotations during the festive period.

In midfield, there are some minor issues, with Harry Winks a doubt due to illness. The Englishman’s availability is subject to a late fitness test, with Moussa Sissoko likely to line up alongside Mousa Dembele if the youngster is not fit enough.

Up front, Son Heung-Min has made a case for another start after two positive performances last week. But, the South Korean is likely to find himself on the bench, alongside Lamela, and the duo might have a say in what could be a close contest.

Relieved to be back. (Photo courtesy – Harry Hubbard/Getty Images)

After one year of agonising wait, Erik Lamela is finally set to return to the field for Tottenham. Mauricio Pochettino has indicated that the Argentine is in contention to make the matchday squad, and the player will, in all likelihood, start on the bench.

How he seizes his opportunity late on, and going further, will be crucial, not just for his Tottenham career, but for Pochettino’s side as well. For now, the player and the club would be glad to get some minutes of action on the field after 13 long months.

The premise that Tottenham are better performers on the road is out of the window after their last two away games, albeit rather harshly so. What is glaring about the North Londoners’ recent results though, is that their defensive shape has been quite average by their lofty standards.

That West Brom gave them quite a scare last weekend should give Leicester some cause for optimism, although Jamie Vardy & co. have been sub par in front of goal in recent weeks. So, it is unlikely to be a goal fest like last season, but Tottenham should have enough firepower to prevail in the end.