The frenzied Premier League action continues just two days after the previous matchday with Gameweek 14. At Vicarage Road, Watford will be aiming to claim another major scalp this season when Manchester United come visiting on Tuesday, aiming to continue piling on the pressure on Manchester City.

The hosts have been one of the many surprise packages in the Premier League, with 21 points from their first 13 games. The Hornets sit just four points out of the Top 4 after their 3-0 win over Newcastle United and will look to make further headway this gameweek, should they manage three points yet again.

Manchester United, on the other hand, seem to have picked up some form of late, although they did lack creativity in their 1-0 win over Brighton & Hove Albion last weekend. Jose Mourinho’s men currently sit in second place in the table, comfortably clear of Chelsea in third, but eight adrift of Manchester City.

The corresponding fixture last season ended in a shock 3-1 win for Watford, with a listless Manchester United not looking the part on the day. Ahead of the latest meeting between the two sides on Tuesday, The Hard Tackle takes a closer look at the encounter.

Marco Silva has a number of injury concerns to deal with ahead of the visit of Manchester United, and the Watford boss could be without as many as six key first-team players on Tuesday night.

Defence is a major area of concern for Silva, with Younes Kaboul (hamstring), Craig Cathcart (knee) and Tommie Hoban (ACL) sidelined with their respective injuries, while Miguel Britos is battling hard to overcome a knock.

Isaac Success and Nathaniel Chalobah (both knee) are also on the treatment table, although the Watford manager has more than enough cover in midfield. The good news is that Troy Deeney is available after serving his three-match ban, and the club captain could come straight back into the starting lineup on Tuesday.

The key men for the hosts will be Will Hughes and Richarlison, the two most in-form players for the side over the last few weeks. The duo will need to be at their best in order to ensure a positive result on Tuesday, with Andre Gray and Troy Deeney not being prolific enough so far this season. 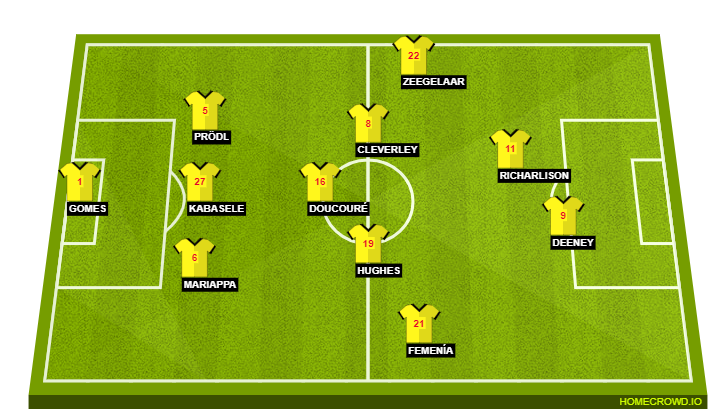 Jose Mourinho has far fewer defensive headaches to contend with than Marco Silva, with just three first-team players unavailable ahead of the trip to Watford. Based on recent developments though, all three of the absentees are likely to return at some point of time in December.

Club captain Michael Carrick recently revealed that he had a procedure on his heart while also dealing with a calf problem. But, the veteran midfielder is hoping to make himself available by next week’s Champions League tie against CSKA Moscow.

There are some problems in defence, with Mourinho sweating over the fitness of Eric Bailly, who is recovering from a groin injury. In addition to the Ivorian, Phil Jones is a certain absentee due to a thigh injury, with the Manchester United manager not putting any time stamp on his return.

Meanwhile, Mourinho indicated the need to contain their opposition better in midfield after the game against Brighton, and as a result, Marouane Fellaini could get a start to load up the midfield. Marcos Rojo might have to make do with a place on the bench again after Victor Lindelof’s exploits on Saturday.

Watford have kicked on superbly after a bit of a lull towards the end of October, and apart from the superb Richarlison, there have been a few others who’ve been the catalyst in this run of form. One such player is Marvin Zeegelaar, who has fit in seamlessly upon his belated debut for the Hornets.

Last weekend, the Dutchman had a hand in two of the three goals that his side scored at Newcastle, with his pace and movement down the left flank enabling Richarlison to move freely into the box centrally.

More of the same on Tuesday, and the nippy Brazilian could become a menace for Victor Lindelof, while Zeegelaar’s own bursts would also keep Antonio Valencia on his toes instead of spending the bulk of the game in the Watford half.

Marco Silva has settled in quickly to life as a Watford manager, and how. The Hornets have already brushed Arsenal aside this season, while also giving quite a scare to Liverpool and Chelsea, and the Hornets are starting to find their feet comfortably in the top half of the table.

On the other hand, Manchester United have stuttered a bit in recent weeks, with teams starting to figure out a way to stop them in their tracks. Watford have some defensive problems though, with only three fit centre-backs, and this could be the game when the Red Devils finally find their swagger.

But, it is unlikely to be one-way traffic on Monday, with Richarlison & co. looking lively and dangerous. The Hard Tackle predicts a keenly contested affair, with Manchester United having just about enough firepower to get the result they want.