Tottenham will look to get back to winning ways in the Premier League when they host West Bromwich Albion at Wembley on Saturday.

The busy festive period of the Premier League is set to kick in starting this weekend, with Gameweek 13. In London, Tottenham will look to move on from their disappointing result in the North London Derby last week when they host a beleaguered West Bromwich Albion at Wembley on Saturday.

The hosts’ form in the Premier League has petered out slightly in recent weeks, with two losses against fellow ‘Big 6’ sides dropping them to fourth in the table, 11 points behind leaders Manchester City. But, the 2-1 win over Borussia Dortmund in the Champions League would have given them a timely boost.

West Brom, on the other hand, are in disarray, with a ten-game winless run dropping them down to 17th in the Premier League table while also costing Tony Pulis his job. The humiliating 4-0 loss to Chelsea at the Hawthorns last week has now left them just a point outside the relegation zone.

The corresponding fixture last season saw Tottenham cruise to a 4-0 win at White Hart Lane, with Harry Kane grabbing a hat-trick. Ahead of the latest meeting between the two sides, The Hard Tackle takes a closer look at the encounter.

The recent results may have been a mixed bag for Mauricio Pochettino, but his injury woes are easing with each passing week. The latest player off the treatment table is Erik Lamela, with the Argentinean winger completing his recovery from a hip injury and played 60 minutes for the under-23 side earlier this week.

The Tottenham boss has indicated that Lamela is in fray to feature on Saturday, although he is unlikely to start. The absentees from Pochettino’s squad are Toby Alderweireld (hamstring) and Victor Wanyama (knee), both of whom are recovering from their respective long-term injuries.

Alderweireld’s absence, in particular, is concerning, with Eric Dier not managing to be solid enough in the back-three, alongside Davinson Sanchez and Jan Vertonghen. There shouldn’t be a lot of changes to the side that beat Dortmund in the midweek, although Kieran Trippier and Ben Davies are likely to be recalled.

In attack, Son Heung-Min has made a case to start on Saturday following his winner in the Champions League tie, although he is unlikely to usurp either Christian Eriksen or Dele Alli. Harry Kane should start as the striker once again, and he would be eager to get back on the score sheet, having disappointed in his last two outings.

Gary Megson has problems aplenty upon being put in temporary charge of West Brom. To begin with, he has a daunting fixture against Tottenham to look forward to as his first game and to make matters worse, several key players are on the sidelines ahead of the trip to London.

The major absentee is Craig Dawson (knee), who has been an instrumental figure for the Baggies at the back in the years gone by. While defence has been a major problem area, the visitors’ attack hasn’t set the stage on fire either.

To exacerbate matters further, Nacer Chadli has been sorely missed in the final third, with his creative ability, and his absence against his former side will take the edge off West Brom’s attacking pursuits.

One man who is likely to benefit from Megson’s temporary tutelage is Chris Brunt, and the Northern Irishman is likely to return to the starting lineup. Meanwhile, the caretaker manager is likely to keep things simple in his first match, and employ the good old 4-4-2 formation.

The focus would be on killing off the half spaces and force Tottenham wide instead of letting them create chances down the middle, and the roles of Jake Livermore and Grzegorz Krychowiak will be crucial for the same. 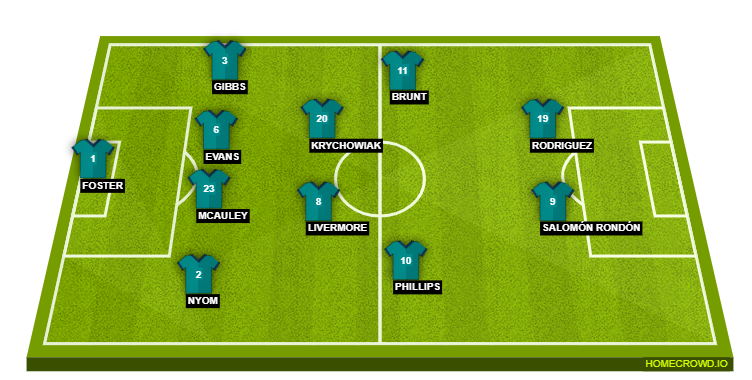 Is there light at the end of the tunnel? (Photo courtesy – Alex Livesey/Getty Images)

It has been quite an eventful last few months for Jonny Evans. The former Manchester United defender almost joined their bitter rivals Manchester City in the summer before assuming the West Brom captaincy. Upon his return to action though, he is yet to win a game this season.

The Baggies have been uncharacteristically poor in defence, with Evans struggling to marshall his troops at the back. On Saturday, West Brom have the chance to become the latest bottom half team to frustrate Tottenham at Wembley, but that can only happen if they rediscover their defensive zeitgeist, and Evans’ role is all the more crucial for that.

The sinking feeling after the derby defeat must have dissipated to a great extent for Tottenham after they confirmed their status as group winners in the Champions League ahead of Real Madrid. Up next for them are a West Brom side that has completely lost its way over the last couple of months or so.

With the Baggies without any sort of momentum at all, Gary Megson & co. should have a hard time making any sort of impact at all on Saturday. The game could also give Dele Alli the chance to return to top form, and it could be a long ninety minutes for the visitors. The Hard Tackle predicts a comfortable 3-0 for the hosts.