Manchester United will aim to temporarily close the gap on Manchester City when they host Brighton & Hove Albion at Old Trafford on Saturday.

Premier League action resumes again this weekend, with Gameweek 13. At Old Trafford, Manchester United will be aiming to return to winning ways after a disappointing midweek result when they play hosts to Brighton & Hove Albion on Saturday.

The hosts returned to winning ways in the Premier League last weekend, as they cruised to a 4-1 win over Newcastle United to remain in second in the table. But, the winning momentum was halted in the midweek as FC Basel handed the Red Devils a 1-0 loss in the UEFA Champions League on Wednesday.

Brighton, on the other hand, have picked up form since their loss to Arsenal last month, having gone unbeaten in their last five games to climb up to ninth in the Premier League table. Their away form has particularly been impressive, with Chris Hughton’s men winning each of their last two games, and quite comfortably so.

The last top flight meeting between the two sides ended all square, with Brighton holding Manchester United to a 1-1 draw at Old Trafford back in March 1983. Ahead of their latest meeting on Saturday, The Hard Tackle takes a closer look at the encounter.

Jose Mourinho does not have any fresh injury concerns to deal with ahead of the visit of Brighton, and the Manchester United manager continues to remain without three first-team players for Saturday’s tie.

The main problem lies in defence, with Mourinho’s first-choice centre-backs Eric Bailly (groin) and Phil Jones (thigh) sidelined with their respective injuries. The manager has not put a specific time stamp on their return, although he is hopeful that Bailly would return next week.

In the absence of the duo, Chris Smalling is likely to continue at the heart of defence, with Marcos Rojo expected to be his partner after Mourinho spoke glowingly about the Argentine following his return in the game against Basel.

The third absentee is captain Michael Carrick, who has been unavailable since September due to a calf injury. His absence hasn’t hurt much though, especially with Pogba returning to action last week. And, the Frenchman is set to continue in midfield, alongside Nemanja Matic.

Zlatan Ibrahimovic is expected to feature again, albeit only from the bench after the Manchester United boss confirmed that he still hasn’t achieved peak fitness yet. With the Swedish striker still not fit enough, Romelu Lukaku should continue up front, with Anthony Martial and Marcus Rashford providing support from the flanks.

Chris Hughton does not have any fresh roster issues at hand either, and the Brighton boss, in fact, has some good news ahead of the trip to Manchester. Israeli midfielder Beram Kayal has regained fitness after recovering from the broken leg he suffered in pre-season, and has traveled with the squad.

Steve Sidwell now remains the only absentee for the Seagulls as he continues to recover from a long-term back injury. But, his absence is not posing a huge concern, with Dale Stephens and summer arrival Davy Propper striking a solid partnership in midfield.

Meanwhile, Hughton is unlikely to shy away from making things difficult for the hosts, and will look upon the likes of Pascal Gross, Anthony Knockaert and Glenn Murray to provide the attacking impetus.

At the back, the onus will be on Shane Duffy and Lewis Dunk to frustrate Romelu Lukaku, while Matthew Ryan will need to be on his guard on an afternoon when he is expected to be peppered with a barrage of shots by the dangerous Manchester United attack. 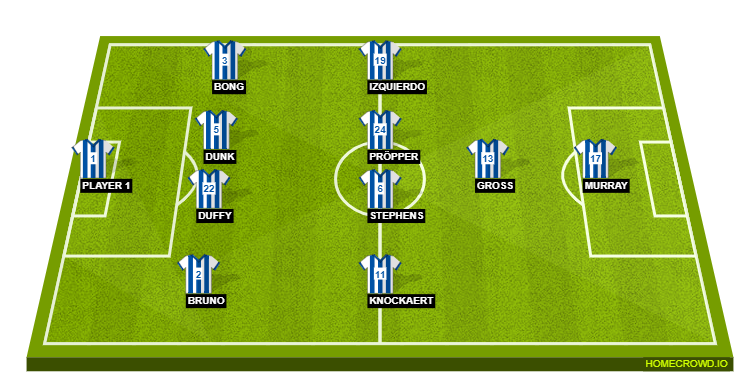 Brighton are suddenly finding themselves at home in the Premier League after a tough start to their campaign, with a five-game unbeaten run taking them up to ninth in the table. Their recent success has been built on fearlessness in attack, and the bulk of the credit for that has to go to Pascal Gross.

The German has been an instant success for the Seagulls, with a hand in eight of the 13 goals that they have scored in the Premier League so far this season. It goes without saying that if Chris Hughton’s men are to spring a surprise on Saturday, Gross will need to be at his best, and the Brighton boss would be hoping for the same.

Brighton may have finally found a key to success in the Premier League, at least for the short-term. But, on Saturday, they will meet one of their most formidable opponents yet in the competition, when they meet Manchester United at what has become a fortress Old Trafford over the last 14 months.

The return of Paul Pogba, in particular, has made the Red Devils a force to be reckoned with, as they showed against Newcastle United last weekend, and the FC Basel result is only likely to be a blip. The gulf in class between the two sides should eventually prove to be a difference, and it should be a comfortable 3-0 win for the hosts.