Manchester United will aim to seal their place in the Round of 16 when they visit the St. Jakob-Park to take on FC Basel on Wednesday

Matchday 5 of the Group Stage of the UEFA Champions League will come to an end on Wednesday. In Group A, Manchester United will be bidding to book their passage to the Round of 16 and confirm top spot, when they take on FC Basel at St. Jakob-Park.

FC Basel have been going through a poor stretch of form of late, having only turned a three-game winless run last weekend, albeit with a fantastic 5-1 win over FC Sion. Manchester United, too, seemed to have bounced back to top form last weekend, comfortably beating Newcastle United 4-1 at Old Trafford.

In Europe as well, the hosts have been going through a mixed run of form, with two wins and as many losses leaving them second, level on points with CSKA Moscow. Manchester United, on the other hand, are the runaway leaders in Group A, with four wins out of four, and needing just one point to progress.

The reverse fixture at Old Trafford, on Matchday 1, ended in a comfortable 3-0 win for Manchester United, with Marouane Fellaini inspiring the comfortable win. Ahead of the latest meeting between the two sides on Wednesday, The Hard Tackle takes a closer look at the encounter.

Raphael Wicky has a few roster issues to deal with ahead of the visit of Manchester United. The FC Basel boss is set to be without as many as four key first-team players for Wednesday’s tie due to injuries or suspension.

The key man for the hosts will be van Wolfswinkel’s replacement up front Dimitri Oberlin, who has grabbed three goals in just two starts this season. The in-form youngster will be crucial to opening up the solid Manchester United defence that has conceded just one goal in the competition so far.

In midfield, Die Serey will also be key to his side’s fortunes if he manages to stifle the rampaging Manchester United attack, while Kevin Bua will aim to continue his goalscoring form after netting a brace on the weekend. 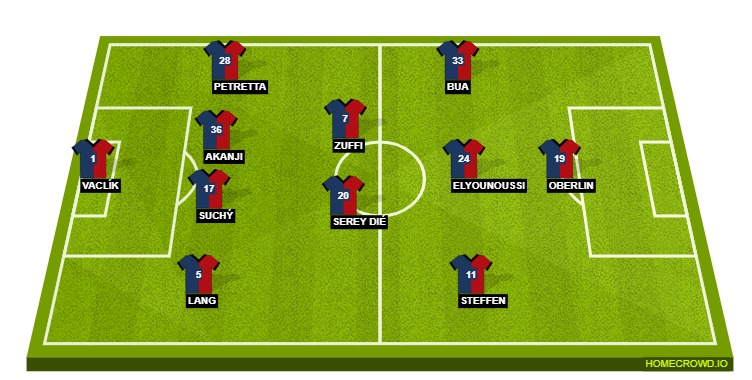 Jose Mourinho’s injury woes have eased considerably post the international break, with the likes of Paul Pogba, Zlatan Ibrahimovic and Marcos Rojo returning to action. But, the Manchester United boss remains without three key first-team players ahead of the trip to St. Jakob-Park on Wednesday.

Defence, and central defence in particular, is an area of concern for Mourinho, with Phil Jones (thigh) and Eric Bailly (unspecified) picking up injuries during the international break. The duo have not trained so far this week, and are expected to miss the trip to Basel.

In their absence, Chris Smalling and Victor Lindelof are expected to continue at the heart of defence, while Rojo is also in contention after completing his recovery from knee injury. Michael Carrick is the third absentee as he continues to struggle with a calf problem.

Meanwhile, Mourinho is likely to ring in a few changes, particularly on either side of defence to where Antonio Valencia and Ashley Young could be rested. The duo is likely to be replaced by Matteo Darmian and Daley Blind.

Paul Pogba, too, might start on the bench or excluded from the matchday squad entirely, as he continues to work his way to peak fitness. Zlatan Ibrahimovic could be involved from the bench once again, after getting 15 minutes of action on Saturday.

From being an early contender for breaking the Premier League assists record of the season to struggling for his spot in the Manchester United starting eleven, things have taken a major turn for the worse for Henrikh Mkhitaryan.

Last Saturday was the lowest ebb in the Armenian’s campaign so far, having been excluded from the matchday squad due to “tactical reasons”. On Wednesday though, Mkhitaryan has the chance to make things right and get back on track this season, should he manage to rediscover his best touch.

Otherwise, it might go on to become a long and hard season for the former Borussia Dortmund man, especially with Zlatan Ibrahimovic’s return giving Mourinho another added option in attack.

October – and early November – was somewhat of a tough period for Manchester United, who saw things slowing down to some extent after a blistering start to their campaign. The win against Newcastle United though, may be an indication of a turnaround in form and fortunes for Jose Mourinho’s men.

FC Basel are not carrying a lot of positive form into the match either, despite their emphatic comeback win over FC Sion last weekend. The absence of Taulant Xhaka, in particular, could be game changing for the hosts, handing Manchester United some advantage to win the midfield battle with relative ease.

With Romelu Lukaku finding his way back to form on the weekend as well, Wednesday could be a long night for Raphael Wicky & co. The Hard Tackle predicts a comfortable 2-0 win for the visitors to seal top spot in Group A.