Sevilla and Liverpool will square off at the Ramon Sanchez Pizjuan Stadium on Tuesday, with top spot on the line in Group E

The UEFA Champions League returns this week, with the penultimate Matchday of the Group Stage. In Group E, Liverpool will be aiming to extend their fine winning run, and their lead on top of the table, when they travel to the Ramon Sanchez Pizjuan Stadium to take on second-placed Sevilla on Tuesday.

The hosts have picked up form over the last one month, having lost just one of their last five games. Liverpool, too, seem to have turned their form around, after winning each of their last four matches in all competitions by a three-goal margin.

As far the Champions League is concerned, Group E is evenly poised heading into Matchday 5. With just three points separating the top three sides, the qualifiers for the knockout stages will almost certainly be decided on the final Matchday, although the winner is likely to have one foot in the Round of 16.

The reverse fixture at Anfield, on Matchday 1, ended in a 2-2 draw with a resolute and clinical Sevilla holding the Reds to a frustrating stalemate. Ahead of their latest meeting on Tuesday, The Hard Tackle takes a closer look at the encounter.

Eduardo Berizzo has several injury concerns to deal with ahead of the visit of Liverpool on Tuesday, and the Sevilla boss could be without as many as seven first-team players for the crucial Champions League tie due to several short-term problems.

The major area of concern due to the aforementioned issues is defence, with Nicolas Pareja (groin) and Daniel Carrico (thigh) on the treatment table, and Sebastian Corchia (thigh) doubtful. To make matters worse, Gabriel Mercado’s (hamstring) availability is uncertain as well, although he has returned to training.

With Corchia and Mercado not certain to start, Simon Kjaer is likely to deputise at right-back, with midfielder Johannes Geis dropping back into the heart of defence alongside Clement Lenglet. On the left side of defence, captain Sergio Escudero will complete the defensive unit.

There are problems in midfield and attack as well, with Jose Mena Rodriguez (groin) sidelined, and the likes of Walter Montoya (groin) and Joaquin Correa (hamstring) only just returning to training, but Berizzo has more than enough cover in his squad to offset the loss of those players. 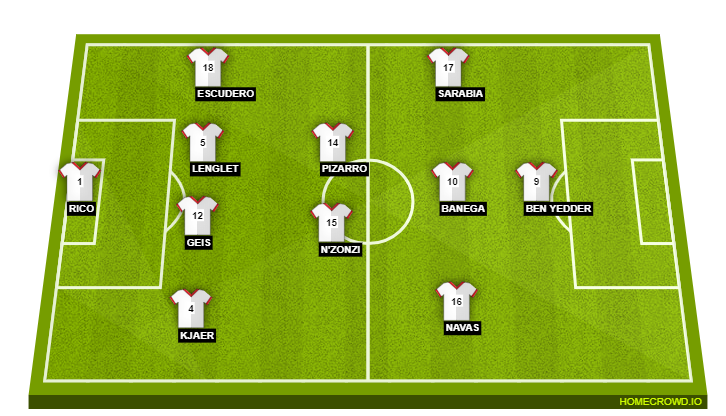 Unlike Berizzo, and perhaps for the first time this season, Jurgen Klopp does not have a lot of injury concerns on his hands heading into a match. In fact, the Liverpool boss is without just one key first-team and two fringe players, with another a minor doubt.

The certain absentees are Nathaniel Clyne (back), who is still a few more weeks away from regaining fitness, and backup goalkeepers Danny Ward (back) and Adam Bogdan (ACL). Joel Matip is a minor doubt due to a thigh strain, and his availability is likely to be determined by a late fitness test.

Meanwhile, Klopp is set to make a number of changes to the side that faced Southampton last weekend, having indicated that he will make a lot of rotations over the course of the busy winter period. The likes of Joe Gomez, Emre Can and James Milner are, thus, likely to make a return on Tuesday.

One certain change though, will be Loris Karius in place of Simon Mignolet, with the German set to take his customary place between the sticks. But, the attacking quartet of Philippe Coutinho, Mohamed Salah, Sadio Mane and Roberto Firmino are unlikely to be rested for the crunch game despite the Chelsea game on the weekend.

Eduardo Berizzo is known to build his side’s success on the back of a solid defence, particularly at home. But, if Sevilla are to take charge of things in Group E, they will need to grab all three points on Tuesday, and the man who will be tasked to get the all-important goals, is Wissam Ben Yedder.

The Frenchman has been in fine form so far this season, with eight goals in 14 outings, and with the likes of Pablo Sarabia, Jesus Navas and Ever Banega providing the support, he should have plenty of opportunities to score another goal past Loris Karius this season.

If he manages to do so, Sevilla may well be on their way to clinching all three points and with it, possible qualification to the Round of 16 as well.

It’s the clash of the group leaders on Tuesday in Seville, with three points giving the victors safe passage into the next stage. With such high stakes in the tie, it is expected be a keenly contested affair between Sevilla and Liverpool.

The formidable attacking quartet that Jurgen Klopp has at his disposal is slowly but surely finding their way to form, but the Andalusians are a hard nut to crack at home, and they just might be able to keep the visitors at bay.

With the kind of quality that is set to take the field on Tuesday though, there will certainly be goals in the game, which is why The Hard Tackle predicts a score draw on the night to take things into the final Matchday.