Barcelona will be bidding to continue their stunning run of form when they travel to Estadio Municipal de Butarque to face Leganes on Saturday.

The dreaded international break is finally over and league football action is set to resume this weekend. On the outskirts of Madrid, Leganes will be looking to spring a huge shocker when they play hosts to La Liga leaders Barcelona at Estadio Municipal de Butarque on Saturday.

The hosts have made an exceedingly fine start to their league campaign, with five wins from their first 11 games putting them in the Top 10. But, their form has taken a slight tumble of late, with two losses in a row leaving them slipping down the table.

Barcelona, on the other hand, have been flying high, having dropped points just once after the first 11 gameweeks. The draw did come away from home, but the visitors’ form in La Liga has been imperious on the whole, which has helped them create a four-point lead at the top of the table.

The corresponding fixture last season ended in an emphatic 5-1 win for Barcelona, with the erstwhile MSN trio running riot. Ahead of the latest meeting between the two sides on Saturday, The Hard Tackle takes a closer look at the encounter.

Leganes have made a bright start to their campaign in La Liga this season, and they have looked a far cry from the outfit that only narrowly avoided relegation last season. Los Legionarios have particularly looked far more resolute at the back, with only Barcelona and Atletico Madrid conceding fewer goals so far.

Heading into the match on Saturday, Asier Garitano is likely to set his side up to defend in numbers to keep the Barcelona attack at bay, in a similar manner to Olympiacos in the Champions League three weeks ago.

The Leganes manager’s job is eased by the fact that he only has two first-team players unavailable, with Jon Ander Serantes (shoulder) and Omar (hamstring) the men on the treatment table. To make matters better for Garitano, Ruben Perez is back from suspension.

The Spaniard’s return will provide an added level of solidity in front of the defensive unit, with the tireless duo of Javier Eraso and Gabriel Pires expected to give him company in midfield. Up front, top scorer Alexander Szymanowski is fit and available, and should line up on the left side of attack. 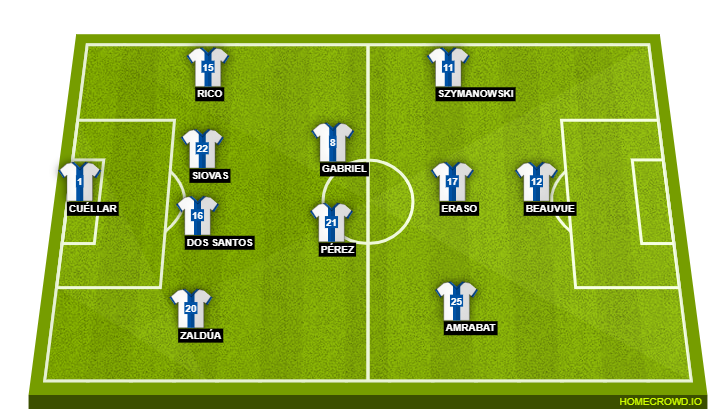 If Leganes have shocked pundits and fans alike with their defensive resolve, Barcelona have sprung a pleasant surprise by making a mockery of pre-season talks of crisis. Under Ernesto Valverde, the Catalan outfit have looked formidable for the most part, thanks largely in part to the form of Lionel Messi.

The form of Andres Iniesta and Sergio Busquets, coupled with Paulinho settling in quickly have helped matters further, making the transitional period under the former Athletic Bilbao boss a short one. The fact that a raft of injuries have not posed much of a problem adds further substance to their exploits.

The unavailability of Roberto and Mascherano is the major concern for Valverde, with the duo’s absence leaving Valverde severely short of options in defence. The back-four of Nelson Semedo, Gerard Pique, Samuel Umtiti and Jordi Alba, thus, becomes an automatic selection.

Up front, Luis Suarez needs to overcome his slump in form soon, with Messi often carrying the team on his own shoulders. The Uruguayan’s support to Messi could potentially further aid Barcelona, and with Paco Alcacer showing glimpses of form, he definitely needs to pick his socks up.

A turnaround in the offing? (Photo courtesy – Josep Lago/AFP/Getty Images)

A turnaround in fortunes may be brewing for one individual at Barcelona, and for the better. Just when it looked like Paco Alcacer’s – so far – ill-fated stint at Barcelona was about to come to an end mere weeks before the winter transfer window, a fantastic performance against Sevilla quickly changed opinions.

A brace couldn’t have been scored at a better time, with Luis Suarez going through the worst slump of his career. An upturn in form for Alcacer could provide Ernesto Valverde an added option up front.

Another sterling performance on Saturday could go a long way, not just in helping Barcelona to a win, but to resurrect his career at Camp Nou. It could also help Alcacer win fans over after a year of misery, making this a golden opportunity that didn’t seem like coming a few weeks ago.

Things just keep on getting better for Barcelona. An eight-point lead over Real Madrid at this stage of the season would have been beyond their wildest dreams back in August, and with Los Blancos meeting Atletico Madrid later on Saturday, Ernesto Valverde’s men could create an even bigger gap at the top of the table.

That being said, Leganes have one of the most frugal defensive units in La Liga so far this season, and getting past them at the Butarque will definitely not be easy. The form of Lionel Messi, though, should be enough to keep the winning momentum going for Barcelona. We predict a hard-fought 2-0 win for the visitors.