Bayern Munich will aim to get a step closer to sealing a place in the UEFA Champions League Round of 16 when they face Celtic on Tuesday.

Champions League action returns this week with Matchday 4 of the Group Stage. In Group B, Bayern Munich will be bidding to get a step closer to securing qualification to the Round of 16, while Celtic will aim to remain in contention when the two sides meet at Celtic Park on Tuesday.

The two sides are separated by just three points at the halfway point of the Group Stage, and are vying for second spot in Group B. A loss on Tuesday, though, would effectively kill the Hoops’ chances of making the knockout stages.

The reverse fixture, two weeks ago, ended in a comfortable 3-0 win for Bayern in what was Jupp Heynckes’ first Champions League match in charge since his reappointment. Ahead of their latest meeting on Tuesday, The Hard Tackle takes a closer look at the encounter.

Brendan Rodgers has a number of injury concerns to deal with ahead of the visit of Bayern Munich on Tuesday. The Celtic boss is set to be without as many as four key first-team players due to various fitness problems.

The defensive unit, in particular, has taken a body blow, with Rodgers set to be without his first-choice centre back pairing of Jozo Simunovic (Achilles) and Erik Sviatchenko (knee). In their absence, midfielder Nir Bitton could have to fill in at the heart of defence, alongside Dedryck Boyata.

Right-back Anthony Ralston is sidelined with a knee injury as well, although his absence is not causing a great deal of trouble with first-choice Mikael Lustig fit and firing. Up in attack, Patrick Roberts is set to miss out due to a hamstring injury he sustained over the weekend against Kilmarnock.

However, there’s some positive news coming Rodgers’ way, with Olivier Ntcham declared fit, having recovered from a minor ankle injury. Meanwhile, the Celtic manager has a big decision to make over which striker to pick on Tuesday, with both Leigh Griffiths or Moussa Dembele in fine form. 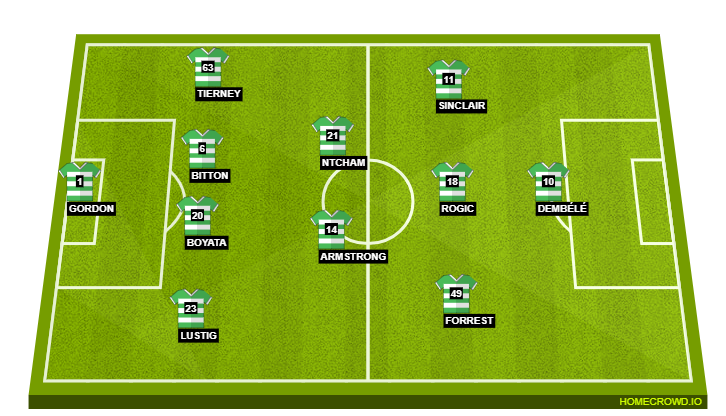 Jupp Heynckes has a number of players unavailable due to various fitness problems as well ahead of Tuesday’s encounter, with five key first-team players sidelined due to injury concerns.

The latest player on the treatment table is Robert Lewandowski, who has missed the trip to Glasgow due to a thigh injury. The Polish striker could be replaced either by young Serb Milos Pantovic or the fit-again Kingsley Coman, who has travelled after recovering from a knee injury.

Apart from Lewandowski, the absence of Thomas Muller (thigh) and Franck Ribery (knee) has left Heynckes, with precious little to choose from. Therefore, Arjen Robben and James Rodriguez are likely to line up on either flank, with Thiago Alcantara expected to feature in the number ten role.

At the back, Juan Bernat has returned to training after recovering from an ankle injury. But, the game has come too soon for him. Manuel Neuer is a long-term absentee, and is only expected to return towards the end of the season, meaning Sven Ulreich will continue to deputise for his senior compatriot.

Kieran Tierney has made an electrifying start to his senior football career, and he has rightly become one of the hottest properties in Europe. The young Scot has been a revelation in defence for Celtic in domestic competitions, but he hasn’t really been caught out in Europe either, impressing over the last two seasons.

On Tuesday, though, the 20-year-old will have his work cut out against a reinvigorated Arjen Robben. Facing one of the biggest ever challenges in his young career, a solid outing would not just help frustrate the visitors, but also see him attract interest from even more clubs as his reputation continues to burgeon.

Two weeks after a one-sided result at Allianz Arena, Bayern Munich and Celtic meet for the second time this season, with three points being as good as gold dust for either side. Unlike the match in Munich though, Tuesday’s encounter should be far more closely contested, with Jupp Heynckes missing several key players.

The presence of Sven Ulreich, who has often been error prone, in addition to the absence of Thomas Muller, Franck Ribery and Robert Lewandowski gives the hosts enough cause for optimism. That being said though, Brendan Rodgers has defensive problems of his own, which might see them fall just short in the end.

With Thiago Alcantara and Arjen Robben in menacing form, Bayern will have enough to grab all three points and get a step closer to qualification. Therefore, The Hard Tackle predicts a hard-fought 2-1 win for the visitors.