Manchester United host Tottenham Hotspur at Old Trafford on Saturday, with second place in the Premier League table on the line

Premier League action resumes this weekend with Gameweek 10. The marquee clash of the week is a high stakes encounter at Old Trafford on Saturday as Manchester United play hosts to Tottenham Hotspur, when a win for either side would take them clear into second place in the Premier League table.

Both sides are currently tied on 20 points, with Manchester United ahead of their visitors on goal difference. The sides, though, come into the game with a contrasting run of league form, with the hosts winless in their last two games, while Tottenham have won each of their last three games.

But while Manchester United were triumphant in their midweek Carabao Cup game, beating Swansea City 2-0, Tottenham went out of the competition after letting go of a two-goal lead to lose 2-3 to West Ham United.

Manchester United narrowly beat Tottenham 1-0 in the corresponding fixture last season, with Henrikh Mkhitaryan scoring the only goal of the game. Ahead of their latest meeting on Saturday, The Hard Tackle takes a closer look at the encounter.

Jose Mourinho does not have any fresh injury concerns ahead of the visit of Tottenham on Saturday. In fact, the Manchester United boss has been greeted by some positive news this weekend, with two players set to be available after their respective injury layoffs.

Phil Jones has shrugged off a minor knock picked up against Huddersfield Town last weekend and is available for the game. Eric Bailly has also returned to training after recovering from a groin injury and is in contention to make his first start in nearly a month.

But, the likes of Marcos Rojo (knee) Michael Carrick (calf), Paul Pogba (hamstring), Marouane Fellaini (knee) and Zlatan Ibrahimovic (knee) remain on the sidelines due to their respective short-to-long-term injuries.

Meanwhile, Ander Herrera and Marcus Rashford are fit after recovering from their respective knocks that they sustained in the cup tie against Swansea. The duo is likely to start on Saturday, alongside the likes of Henrikh Mkhitaryan, Juan Mata, Nemanja Matic and Romelu Lukaku.

Mauricio Pochettino does not have a lot of roster issues ahead of the trip to Manchester. But, the Tottenham boss has been hit hard by the news that Harry Kane will not be a part of the travelling squad on Saturday, due to a minor hamstring injury that he picked up against Liverpool last week.

The English striker is now fighting to regain fitness for the crunch UEFA Champions League tie against Real Madrid on Wednesday. In his absence, Pochettino has the choice between Son Heung-Min and Fernando Llorente to lead the line, although the latter might get the nod to pave the way for a more fluid attack.

Other than Kane, Victor Wanyama (knee) and Erik Lamela (hip) are the only absentee in the Spurs first-team squad, with the duo likely to return next month. Mousa Dembele, though, might miss out on Saturday, having only returned to training earlier this week.

Meanwhile, Danny Rose is in contention to make his first league start in ten months, having completed his recovery from a long-term knee injury, and is vying with Ben Davies for the left wing-back slot. The likes of Jan Vertonghen, Hugo Lloris and Davinson Sanchez, though, are set to return after getting a rest on Wednesday. 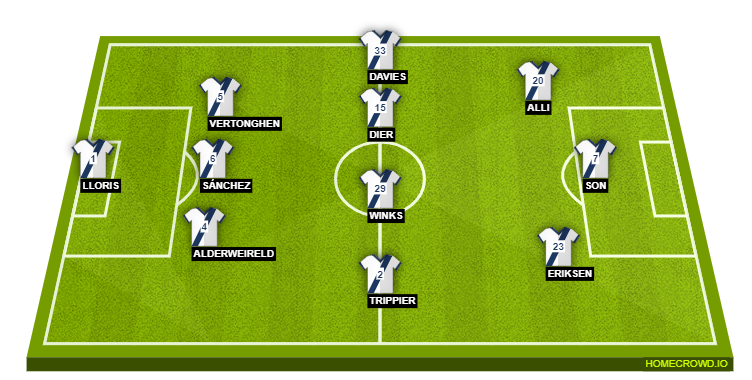 Will Lukaku finally right the wrongs against a ‘big six’ side? (Photo courtesy – Paul Ellis/AFP/Getty Images)

The goals have dried up in the last few weeks for Lukaku, who was in rampaging form in the first two months of the season. Now without a goal in four, the Belgian striker would not only be looking to get his scoring boots back on, but also improve his record against the ‘big six’ clubs in the Premier League.

With just 15 goals in 58 outings against these sides, at an average of 289 minutes per goal, Lukaku’s record against the best of teams leaves much to be desired. If he manages to improve on this on Saturday though, he could set Manchester United up for a crucial victory against their title rivals, and Mourinho would be hoping for the same.

Level on points with only goal difference separating them, Manchester United and Tottenham face the biggest test of their Premier League title credentials thus far. Three points on Saturday would send the winners into sole second place, which is ever so crucial at this juncture of the season.

While Spurs would be riding high on confidence after last week’s win over Liverpool, Wednesday’s loss to West Ham has showed just how crucial Harry Kane could be in tight situations. Manchester United, on the other hand, would still be smarting from their loss at Huddersfield, and Jose Mourinho would egg his side on to perform better.

Expect a slightly pragmatic approach from the hosts yet again, although they are unlikely to be overly defensive against a Kane-less Tottenham. With their talisman absent on Saturday, Manchester United start as favourites, and The Hard Tackle predicts a hard-fought 1-0 win for Mourinho’s men.