Real Madrid will look to kick off their Copa del Rey campaign with a bang when they face Fuenlabrada in the Round of 32 on Thursday.

Real Madrid will get their bid to win their first Copa del Rey title since 2014 underway on Thursday, when they travel to Estadio Fernando Torres to take on Segunda Division B side Fuenlabrada.

The hosts have been in fine form in the third tier of Spanish football as they’re currently placed second in the Segunda B table, having lost just once in their campaign thus far. Antonio Calderon’s men progressed to the Round of 32 by beating CD Calahorra 3-1 in the previous round.

Real Madrid, on the other hand, have made a slightly slow start to the season, having already fallen five points behind bitter rivals Barcelona in La Liga. Zinedine Zidane’s men come into the match on the back of a comfortable 3-0 win over Eibar over the weekend.

The two sides have not met each other previously, and ahead of their very first meeting, The Hard Tackle takes a closer look at the encounter.

Antonio Calderon’s men have been on a tear thus far this season, losing just once with a current unbeaten streak of eleven games in all competitions to boast of. But, in Real Madrid, the minnows will face their biggest test yet, even though the visitors will largely comprise of second string players.

However, the Fuenlabrada boss is expected to dish out a full-strength side to keep their faint hopes of a shock result alive. The key man at the back for the hosts will be goalkeeper Pol Freixanet, who is likely to be a busy man between the sticks against the firing visitors.

The onus, though, will be on star striker Dioni and winger Hugo Fraile. The duo have combined to score seven goals between them so far this season, and will need to have their scoring boots on in order to fire their side to shock win. 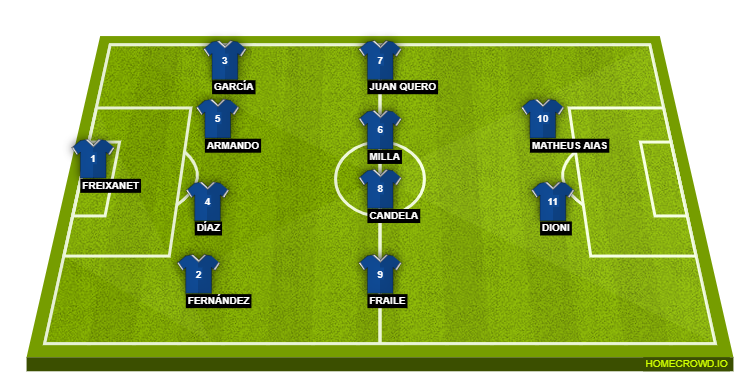 Zinedine Zidane does not have any fresh injury concerns ahead of the cross capital trip to Estadio Fernando Torres. Keylor Navas (thigh), Dani Carvajal (Pericarditis), Mateo Kovacic (groin) and Gareth Bale (calf) continue to remain unavailable due to their respective issues.

But, Zidane gave a positive report on Carvajal and Bale, indicating that the duo have completed their rehabilitation and are on the path to recovery. Meanwhile, Sergio Ramos and Cristiano Ronaldo have been rested for the game, with Zidane choosing not to travel with the duo.

Apart from Ramos and Ronaldo, Zidane is likely to make wholesale changes to the side that faced Eibar on Sunday, with the likes of Achraf Hakimi, Jesus Vallejo, Marcos Llorente and Lucas Vazquez expected to make the starting lineup on Thursday.

Meanwhile, Zidane called up several players from the Real Madrid Castilla side to train with the first-team squad, and the likes of Manu Hernando, Tejero, Cristo, Franchu, Oscar, Quezada, Luca Zidane and Moha are in contention to feature.

The start of the season has been tough for Vazquez, who has seen his role being reduced significantly so far this season. His form has been a concern for Zinedine Zidane as well, with the Spaniard managing to find the back of the net just once.

On Thursday, against the third tier side Fuenlabrada, the 26-year-old could have his best opportunity yet to find his way back to top form. A solid outing on Thursday could also pave the way for a comfortable win for Los Blancos.

Real Madrid turn their attention to cup football for the first time this season, and the game against third tier Fuenlabrada offers them a chance to finally hit top form, having struggled quite a bit so far. Recent outings though, have indicated a turn in form.

The hosts have been in top form, on the other hand, but are unlikely to offer much of a resistance, even against a largely second string Real Madrid side. Therefore, The Hard Tackle predicts a comfortable 3-0 win for Zinedine Zidane & co.