Manchester United will look to move a step closer to defending their Carabao Cup title when they meet Swansea City at the Liberty Stadium on Tuesday.

The Carabao Cup moves into the fourth round this week. In Wales, Manchester United will be looking to get back to winning ways and move into the quarterfinals of the tournament, when they travel to the Liberty Stadium to take on Swansea City on Tuesday.

The hosts have struggled at the start of the season in the Premier League, having notched up just eight points from their first nine games, sitting outside the relegation zone on goal difference.

Manchester United, on the other hand, have started the season strongly, but have struggled of late, dropping five points behind neighbours Manchester City over the last two weeks.

The Swans progressed to the fourth round of the Carabao Cup by beating Reading 2-0. Jose Mourinho’s men on the other hand, cruised into the fourth round by comfortably beating Burton Albion 4-1. The two sides have already met each other this season, with Manchester United running out emphatic 4-0 winners at Liberty Stadium in August.

Ahead of their latest meeting on Tuesday, The Hard Tackle takes a closer look at the encounter.

Paul Clement does have a few injury concerns to deal with ahead of the visit of Manchester United, with the Swansea City boss set be without the services of three key first-team players on Tuesday.

Renato Sanches is the latest player on the treatment table, having picked up a thigh injury against Leicester City over the weekend. The on-loan Portuguese midfielder has joined Wilfried Bony (hamstring) and long-term absentee Kyle Bartley (knee) on the sidelines.

Meanwhile, Roque Mesa is set to start on Tuesday, after recently claiming that he might have to consider his future at Swansea with Clement regularly overlooking him. But, first-choice goalkeeper Lukasz Fabianski is set to be rested, with Kristoffer Nordfeldt set to deputise in goal.

The key man for the hosts, meanwhile, will be Tammy Abraham, who has been in impressive form thus far this season. The on-loan Chelsea striker looks the likeliest to find the back of the net for the Swans on Tuesday, with Tom Carroll another danger man, with his creativity. 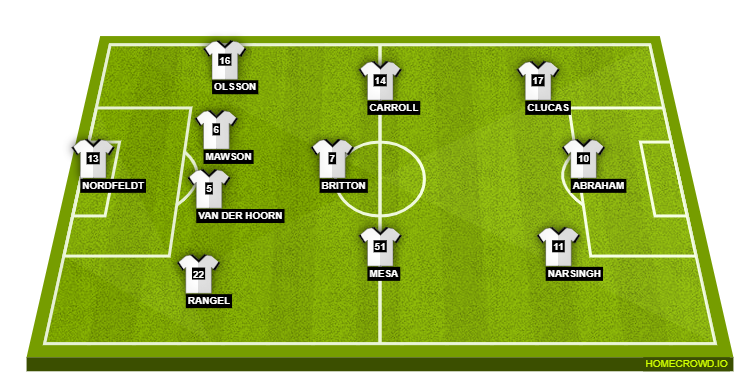 Jose Mourinho’s injury woes are deepening with each passing week, with defence in particular, proving to be a major area of concern. Ahead of the trip to Wales, the Manchester United boss looks set to be without as many as seven key first-team players.

Phil Jones is the latest player to be sidelined, after the England defender appeared to have picked up a groin injury. With Eric Bailly out with a similar problem as well, Victor Lindelof is likely to continue at the heart of the Manchester United defence.

Further forward, the likes of Michael Carrick (calf), Marouane Fellaini (knee) and Paul Pogba (hamstring) are all reportedly in line to make a return within the next two weeks, although Tuesday’s game comes too soon for them. Zlatan Ibrahimovic (knee) is a long-term absentee.

Meanwhile, reports have claimed that the likes of Axel Tuanzebe, Luke Shaw, Scott McTominay and Joel Pereira are all set to be included in the matchday squad, having been overlooked for Monday’s reserve game against Liverpool.

The Englishman had arrived at Manchester United full of promise, with many hailing him to be the next big thing in defence in the country. A little over three years later, a spate of injuries and poor form have meant that Luke Shaw’s career has headed nowhere.

Now at a crossroads in his Manchester United career, Shaw looks like this season is his last chance to salvage a future at Old Trafford. On Tuesday, he will have the first of the few chances that will be afforded to him in the coming months.

If he grabs his opportunity with both hands, a Shaw renaissance will be on the cards. If not, then the end of the road may be near for the young Englishman.

The unbeaten start to the season ended with a shock loss at Huddersfield, and Manchester United have been jolted by the result over the weekend. With Jose Mourinho launching a scathing attack on his squad, a reaction is expected on Tuesday.

With Swansea bearing a vulnerable look at the back, the Manchester United attack should have a field day despite struggling to an extent of late. Therefore, The Hard Tackle predicts a relatively comfortable 2-0 win for the visitors, with Mourinho likely to give Anthony Martial and Marcus Rashford an early night.