Manchester City will look to continue their winning streak when they host Wolverhampton Wanderers at the Etihad in the Carabao Cup on Tuesday.

It’s the clash of the league leaders, albeit in different divisions, on Tuesday in the fourth round of the Carabao Cup. Manchester City play hosts to Wolverhampton Wanderers at Etihad and the Citizens will be looking to continue their winning streak and progress into the quarterfinals.

City are the runaway leaders in the Premier League, having already established a five-point lead at the top of the table. Pep Guardiola’s men are currently in the middle of an 11-game winning run, with their latest result being a comfortable 3-0 win over Burnley on Saturday.

Wolves, on the other hand, have made a strong start to their Championship campaign and are in the driver’s seat to win back promotion to the Premier League, leading the rest of the pack by at least two points. Nuno Espirito Santo’s men come into the match on the back of a hard-fought 3-2 win over Preston North End.

The two sides last met in the 2011-12 Premier League season, with Manchester City running out comfortable 2-0 winners over the minnows. Ahead of their latest meeting on Tuesday, The Hard Tackle takes a closer look at the encounter.

Pep Guardiola does not have any fresh injury concerns heading into Tuesday’s match – Vincent Kompany (calf) and Benjamin Mendy (knee) continue to remain the only absentees from his first-team squad.

Ahead of the game against Wolves though, the Manchester City boss has confirmed that he will make a raft of changes from Saturday, perhaps to the extent of dishing out an entirely new starting eleven, in order to keep his players fresh, with key games beckoning in the next few weeks.

Therefore, the likes of Yaya Toure, Ilkay Gundogan, Raheem Sterling, Eliaquim Mangala and Danilo are expected to take their place in the starting lineup on Tuesday. The likes of Oleksandr Zinchenko, Brahim Diaz and Tosin Adarabioyo are also in line to get some minutes under their belts.

Sergio Aguero is in contention to feature as well, Guardiola confirmed, with the Argentine on the cusp of breaking the all-time goalscoring record at Manchester City.

Nuno Espirito Santo does not have a lot of roster issues troubling him either, with just three first-team players unavailable for the trip to Manchester. Among these, the absence of Carl Ikeme and Phil Ofosu-Ayeh has not been felt much, with John Ruddy and Matt Doherty going strong in the respective positions.

But, Helder Costa, last season’s talisman, has been a major absentee due to an ankle injury that has kept him out of action since April. Summer signing Ruben Neves, though, has been a key man for Wolves thus far, and will be pivotal for the visitors on Tuesday, alongside top scorer Leo Bonatini.

Meanwhile, the Wolves boss is unlikely to rest players for the second successive round, having made eight changes last time around. In fact, Santo will be eyeing a major cup scalp for yet another season, having beaten Liverpool in the FA Cup last season. 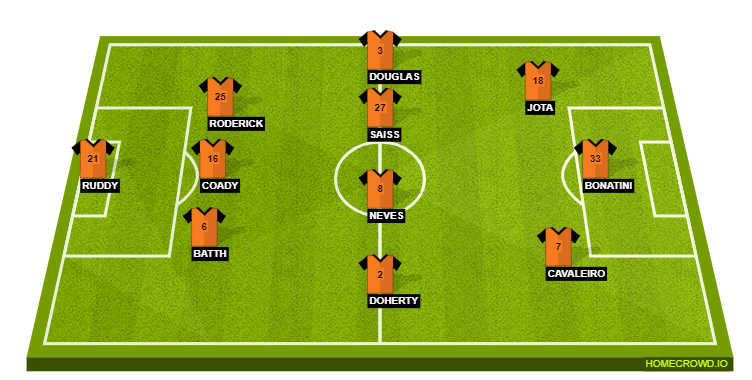 On the verge of making history and set to feature on Tuesday, Sergio Aguero will be the man under the spotlight at the Etihad. Wolves have been defensively solid thus far this season, but against the in-form striker, they may not be able to delay the inevitable. Therefore, we may just see history being made on the night.

The unstoppable Manchester City meet one of the favourites for promotion to the Premier League on Tuesday. With a second-string Citizens side set to feature on Tuesday, it is likely to be a close contest.

Defence, in particular, will be tested on the night, although the gulf in class between the two squads will be enough for the hosts to get the win. The Hard Tackle predicts a 2-1 win for Pep Guardiola’s men, with Sergio Aguero making history.