The Group Stage of the UEFA Champions League reaches its midway stage with Matchday 3 ending on Wednesday. In Group C, Chelsea will look to get back to winning ways by continuing their perfect run in Europe’s premier club competition when they play hosts to AS Roma at Stamford Bridge.

The Blues’ domestic and European form have been quite contrasting so far. While Antonio Conte’s men have made a perfect start to their campaign in the Champions League, they have stuttered in their Premier League title defence, having already lost three of their first eight games, including the shock 2-1 defeat to Crystal Palace on the weekend.

AS Roma, too, haven’t inspired a lot of confidence in domestic competition, having already fallen nine points behind Napoli in Serie A. In the Champions League though, the Giallorossi are unbeaten, although they are two points adrift of their hosts on Wednesday.

The Hard Tackle takes a closer look at the encounter.

Antonio Conte’s injury woes are mounting by the week, making it all the more tricky for him to keep an already thin squad fresh and firing week after week. Ahead of Roma’s visit on Wednesday, the Chelsea boss could be without as many as four key first-team players.

The latest player on the treatment table is Victor Moses, who picked up a hamstring injury during the match against Crystal Palace. The Nigerian international is reportedly expected to spend at least four weeks on the sidelines, meaning Davide Zappacosta is set to get an extended run in the side.

Meanwhile, Conte is down to his bare bones in midfield, with N’Golo Kante (hamstring) and Danny Drinkwater (calf) unavailable. In the duo’s absence, Cesc Fabregas and Tiemoue Bakayoko should continue in the middle of the park for the Blues.

Conte, though, confirmed that Alvaro Morata is in contention to start on Wednesday, having taken part in training in the last two days. With Michy Batshuayi flattering to deceive over the weekend, the Spaniard might just get an hour or so to help set up a positive result.

Antonio Rudiger is in line to face the club he joined from this past summer, but Conte is likely to persist with Cesar Azpilicueta, David Luiz and Gary Cahill in the back-three despite a poor showing against the Eagles.

Eusebio Di Francesco has a number of roster issues to deal with as well ahead of the trip to London to face Chelsea. The Roma boss could, in fact, be without the services of as many as six first-team players on Wednesday.

The major absentee for Di Francesco is Kostas Manolas, who picked up a thigh injury in Roma’s 1-0 loss to Napoli, and is set to spend an extended spell on the sidelines. In the Greek defender’s absence, Federico Fazio could be the man to pair up with Juan Jesus at the heart of the Roma defence.

Also on the treatment table are Emerson Palmieri (knee), Gregoire Defrel (thigh) and Patrik Schick (hamstring), while Kevin Strootman and Stephan El Shaarawy (both groin) are doubtful for the tie. But, the latter two have a strong chance of returning to action on Wednesday, providing some relief to the Roma boss.

The onus on Wednesday will be on Radja Nainggolan – heavily linked with a move to Chelsea this past summer – to provide control from midfield while setting up the chances for the dangerous Edin Dzeko in attack. 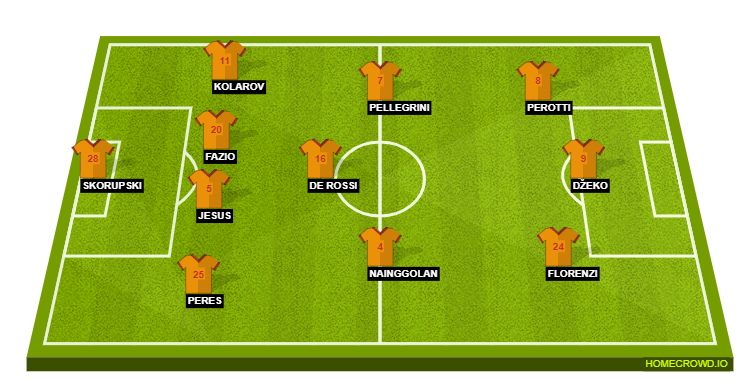 After a topsy turvy stint in England, Edin Dzeko has settled extremely well in Italy. Top scorer in Serie A last season, the Bosnian has started the 2017-18 campaign with a bang as well, even though Roma seem to be struggling slightly at the start of the season.

With eight goals in nine games across all competitions, Dzeko has continued to be a prolific powerhouse for the Giallorossi, and he will need to have his goalscoring boots on against Chelsea as well. Should he manage to break his duck against the Blues, Dzeko will set his side up well to ensure they take a point or three back home.

The marquee clash on Matchday 3 pits two sides who have seen form desert them to an extent in recent weeks. While Roma lost a lot of momentum against Napoli on the weekend, Chelsea have dropped a massive six points in their last two Premier League games.

In Europe though, both sides have looked strong, and a hotly contested fixture is on the cards on Wednesday. With minor defensive issues plaguing the hosts as well as the visitors, and with the leading men, Alvaro Morata and Edin Dzeko in some hot goalscoring form, there should definitely be goals in the tie.

Therefore, The Hard Tackle predicts a close game to end in a 1-1 draw for Group C to set up enticingly, should Atletico Madrid overcome Qarabag in their game.