Manchester City will look to extend their perfect record in the Champions League when they host Napoli at the Etihad on Tuesday.

The UEFA Champions League group stage reaches its midway this week, with Matchday 3 starting on Tuesday. In Group F, the two most in-form sides in Europe will go head-to-head with each other at the Etihad, when Manchester City host Napoli.

The hosts have been in rampaging form at the start of the season as they currently sit atop the Premier League as well as Group F in the Champions League, having failed to win just one game in all competitions. Pep Guardiola’s men come into the match full of confidence after thrashing Stoke City 7-2 on the weekend.

Napoli, on the other hand, are the undisputed leaders of Serie A, having won each of their first eight games so far. However, the visitors sit third in Group F, having lost their opening encounter against Shakhtar Donetsk before beating Feyenoord on Matchday 2.

The two sides last met in the 2011-12 Champions League group stage, with the two sides playing out an entertaining 1-1 draw in Manchester. Ahead of their latest meeting on Tuesday, The Hard Tackle takes a closer look at the encounter.

Pep Guardiola does not have any fresh injury concerns to deal with ahead of the visit of Napoli. The Manchester City boss, in fact, has only positives in terms of team news, with Sergio Aguero recovering from a rib injury well ahead of schedule, and Vincent Kompany inching closer to a return as well.

Aguero, meanwhile, is in line to start on Tuesday after appearing from the bench against Stoke City on the weekend. Leroy Sane could be in the unfortunate player making way for the Argentinean striker, although Gabriel Jesus could be rested as well.

Other than Aguero’s inclusion, Guardiola is unlikely to make any other changes to the side that dismantled the Potters with ease on Saturday. The key men for the hosts will again be Kevin De Bruyne and David Silva, who have ran the show for the Citizens this season, providing 14 assists among them in all competitions.

Like his counterpart, Maurizio Sarri does not have fitness issues on his hands either, with just one player unavailable for the trip to Manchester. Arkadiusz Milik is nursing a long-term knee injury, and is believed to be on the sidelines for several months after a recurrence of an ACL injury.

However, the Napoli boss has been urged by club president Aurelio De Laurentiis to rest some of his key players in preparation of their crunch Serie A clash against Inter Milan on the weekend. However, Sarri is unlikely to rest a lot of his regulars, with the double header against City over the next few weeks being extremely crucial to their European fortunes.

Therefore, the likes of Dries Mertens, Lorenzo Insigne and Jorginho are expected to feature on the night, although Sarri could end up resting one or two of his important figures. The onus on Tuesday, though, will be on Pepe Reina to continue a run of clean sheets in order to frustrate the free scoring Citizens. 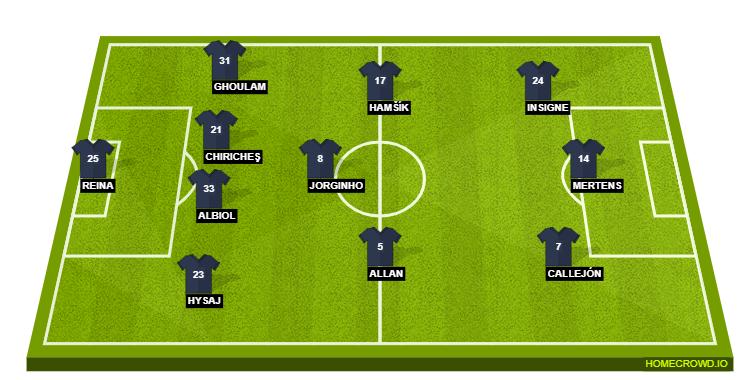 If there’s one positive outcome from Arkadiusz Milik’s long injury layoffs since last season, it’s the revelation that Dries Mertens has proven himself to be as a striker for Napoli. Now a prolific powerhouse for the Partenopei, the Belgian will be key to his side’s fortunes on Tuesday as well.

In fact, if Napoli are to take anything away from the match on the night, Mertens’ contribution will go a long way in ensuring a positive result. And against a Manchester City defence that has shown signs of vulnerability, the player would certainly fancy his chances.

Two teams that just can’t stop scoring at the moment square off against each other on Tuesday, and the match has all the ingredients to be a nail biting affair. Napoli would be desperate to make amends on the shock loss to Shakhtar Donetsk, and are likely to go all out in search of goals.

That should open up the opportunities for Kevin De Bruyne and David Silva to work their magic and exploit the spaces on offer. The hosts’ frailties in defence, though, were exposed by Stoke City on the weekend, and Maurizio Sarri’s men would look to exploit the weaknesses in the City backline.

All in all, the match has all the makings to be a high scoring affair, but the sheer quality at Pep Guardiola’s disposal means that it is hard to look past the Citizens for this one. The Hard Tackle predicts an odd-goal win in five for the hosts on the night.