Matchday 3 of the UEFA Champions League concludes on Wednesday, with Groups A-D completing their latest set of fixtures. In Group D, Barcelona will look to take a major step towards securing qualification to the Round of 16 when they play hosts to rock bottom side Olympiacos at Camp Nou.

The hosts are currently atop their group, with six points out of six following their first two games. In fact, Ernesto Valverde’s men are yet to face defeat in all competitions as they’re currently the league leaders in La Liga as well, although their most recent result was a closely contested 1-1 draw at Atletico Madrid.

Olympiacos, on the other hand, have not started the season in the right fashion, with two losses from their first two games in Group D. Furthermore, the Greek champions have started the defence of their title in a meek manner, with only three wins from their first seven games leaving fifth in the table.

The two sides have never met each other previously, and ahead of their very first meeting on Wednesday, The Hard Tackle takes a closer look at the encounter.

Ernesto Valverde does not have any fresh injury concern to deal with ahead of the visit of Olympiacos. Therefore, the Barcelona boss continues to remain without the services of Ousmane Dembele (thigh), Rafinha (knee) and Arda Turan (foot), although the latter two are nearing their return.

Valverde, though, will be aiming to move on quickly from an arguably sub par performance at the Wanda Metropolitano on the weekend. The main focus would be on regaining control in midfield, while also posing more threat in the final third.

With that in mind, Andre Gomes is unlikely to get another start on Wednesday after failing to impress much against Atletico Madrid. Ivan Rakitic, too, struggled on Saturday, and the Croat could miss out against the Greek champions.

In their stead, the likes of Gerard Deulofeu, Denis Suarez and Sergi Roberto are the players in contention to be handed a start on Wednesday. The defensive unit, as well as the likes of Andres Iniesta, Sergio Busquets, Lionel Messi and Luis Suarez, though pick themselves for the match.

Things haven’t been easy for the Greek champions at the start of the season. Their league campaign has kicked off on a whimper, with only 11 points from their first seven games. The Piraeus club also saw Besnik Hasi leave after just three months in charge after a tough start to the season.

In Group D, Olympiacos have largely been listless, failing to measure up to Sporting Lisbon and Juventus before taking the daunting trip to Camp Nou. However, a hard fought 4-3 win over Panionios on the weekend would have done wonders for their confidence.

Ahead of the match on Wednesday, new boss Takis Lemonis has his job becoming all the tougher, with four key first-team players sidelined. The quartet of Diogo Figueiras, Seba, Emmanuel Emenike and El Fardou Ben Nabouhane  are unavailable for Wednesday’s away game, and have been left out of Lemonis’ travelling squad.

The absence of Figueiras and Seba, in particular, would hurt the Olympiacos manager’s preparations heading into the tie, with the duo being mainstays in defence and attack respectively. The duo is likely to be replaced by Omar Elabdellaoui and Marko Marin in the starting eleven. 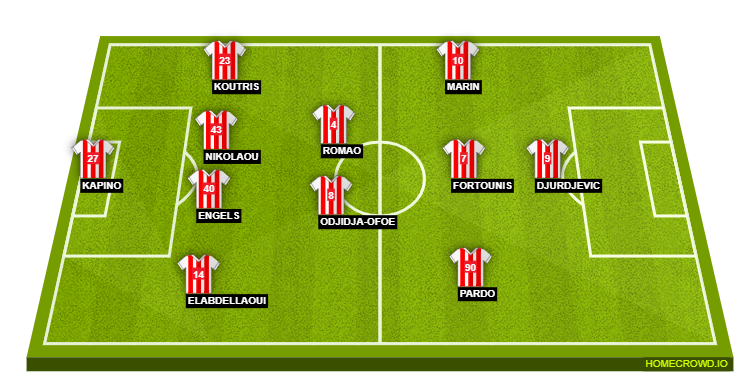 Barcelona have kicked of the 2017-18 season with a bang, having not lost a single game more than two months into the season. However, there are one or two positions in Ernesto Valverde’s side that haven’t seen players stamp their authority on.

One such position is on the right side of attack, where the likes of Andre Gomes, Sergi Roberto, Aleix Vidal and Gerard Deulofeu have been deployed, has not any of the players stake claim for regular inclusion.

Having made a mark in short stint on the pitch against Atletico Madrid on the weekend though, Deulofeu has the chance to make an even bigger mark on Wednesday against a struggling Olympiacos side. An underwhelming outing, however, would kill any chance of getting a larger role at Camp Nou this season.

Ernesto Valverde is set to take a nostalgia trip this month as he gets to face some of the sides that he has managed previously. First up for the Barcelona boss are Olympiacos, who are struggling and appear low on confidence at this early stage of the season.

Valverde’s men though, are riding high on confidence, having made a solid start to their campaign in league and Europe. Therefore, it is hard to seen anything other than a comfortable win for Barcelona, and The Hard Tackle predicts a 3-0 home success for the hosts.