Spain and Italy renew their fabled rivalry on Saturday when they take on each other at Santiago Bernabeu in a 2018 FIFA World Cup qualifier.

The fortnight-long international break has thrown up some interesting results thus far, with teams fighting hard to inch a step closer to securing qualification for next summer’s World Cup. In Group G, the marquee clash sees joint leaders Spain and Italy battle for top spot at the Bernabeu on Saturday.

The two European heavyweights are separated by just goal difference, winning five games each while drawing the one in which they previously faced off. The two teams are almost guaranteed to secure the top two places, but claiming the automatic qualification spot is on the agenda for each side.

As iterated earlier, the two sides played out a draw in their previous meeting – a 1-1 stalemate – with Daniele De Rossi and Vitolo being the scorers for Italy and Spain respectively. Ahead of the latest installment of the historic rivalry between the two side, The Hard Tackle takes a closer look at Saturday’s encounter.

A big absentee and a surprise call-up aside, Julen Lopetegui has retained the majority of his core group for his latest Spain squad. Diego Costa, who has been the first-choice striker for La Roja under Lopetegui over the last twelve months, has missed out due to lack of match fitness and practice owing to his Chelsea exile.

The surprise selection, though, was David Villa, who last made an appearance for Spain more than three year ago. However, his stellar form in MLS has helped the country’s leading goalscorer earn a call-up at the age of 35.

As far as team selection is concerned, the defensive and midfield units are likely to pick themselves up automatically with Lopetegui expected to start his strongest side on Saturday. The likes of David De Gea, Dani Carvajal, Sergio Ramos, Gerard Pique, Jordi Alba, Sergio Busquets, Andres Iniesta and Isco should all start.

Up front, though, the three attacking places are up for grabs. But, in form duo Marco Asensio and Alvaro Morata are likely to be get the nod, with David Silva – the top scorer under Lopetegui – expected to take up the spot on the right side of attack. Villa could see some action from the bench though. 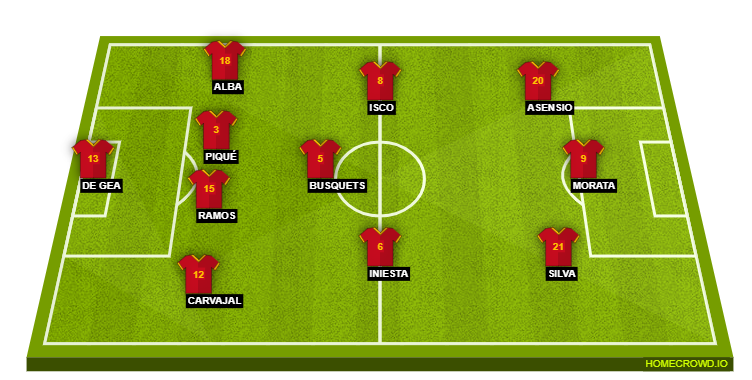 Gian Piero Ventura has selected more or less the same squad that thrashed minnows Liechtenstein 5-0 in their last outing. But, the Italy boss has been hit with a late selection issue at the back, with Giorgio Chiellini pulling out of his squad late after sustaining a calf injury in training.

In the veteran Juventus defender’s absence, Ventura could either go with the experience and guile of Andrea Barzagli, or the youthful exuberance of Daniele Rugani, while new AC Milan man Leonardo Bonucci is likely to take up the other spot at the heart of defence.

On the right side of defence, Andrea Conti is expected to get the nod, with Leonardo Spinazzola and Darmian battling it out for the left-back slot. The rest of the side is likely to select itself, with the likes of Daniele De Rossi, Marco Verratti, Andrea Belotti, Lorenzo Insigne and Ciro Immobile making up the core of Ventura’s senior setup.

The only remaining place could be the subject of a hot contest between Lorenzo Pellegrini, Antonio Candreva and Stephan El Shaarawy. But, the Inter Milan man is likely to get the nod ahead of the AS Roma players, having been one of the form men for the Azzurri over the last few years. 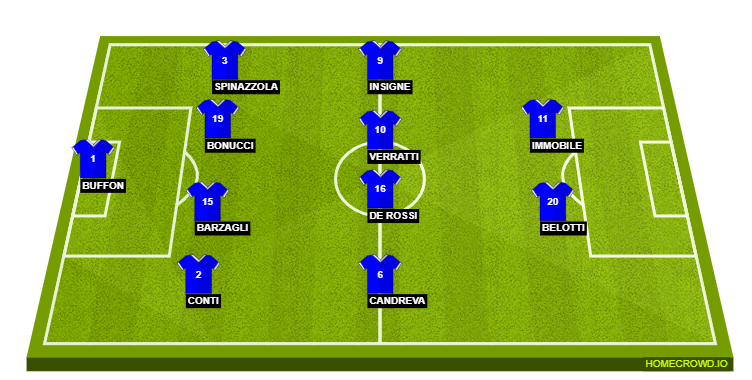 Marco Asensio has taken the footballing world by storm over the last twelve months. A key figure at Real Madrid, the 21-year-old also played a key role in Spain reaching the final of the under-21 European Championship before they eventually succumbed to Germany.

At the start of the 2017-18 season though, the youngster is arguably the most in-form footballer in Europe, having already found the back of the net 4 times in just 5 games. His stupendous form could now help Asensio make his first start for the senior Spanish side to add to his three previous substitute appearances.

With a deadly eye for goal, the player has the potential to cement his place at the international level as well, although he does have a lot of competition from his compatriots for the attacking slots. A strong outing against Italy though, could go a long way.

Four rounds remain before the first stage of the qualifying campaign in Europe ends and the automatic qualifiers are known. In Group G, Spain and Italy are almost guaranteed to take up the top two spots, with third-placed Albania seven points adrift of the duo.

However, with only the first-placed side guaranteed a place in the World Cup, with the runners up slogging it out in the play-offs, the match on Saturday is the most crucial qualifier for both sides in their bid to book their tickets to Russia.

As is the case in match-ups between Spain and Italy though, Saturday’s encounter is likely to be another hotly contested affair, with little to separate the two sides. The Hard Tackle, thus, predicts another 1-1 draw for the duo.