The latest round of international fixtures are upon us, with the World Cup qualifiers set to be played this week. In what is expected to be a one-sided contest in Group B, Portugal play hosts to minnows Faroe Islands at Estadio do Bessa on Thursday.

The Seleccao currently sit second in Group B, three points behind leaders Switzerland. With just four games remaining before the qualifying campaign ends, winning every match is important for Fernando Santos’ men in order to claim an automatic berth into the World Cup.

The visitors, meanwhile, have no such hopes from their qualifying campaign. Even though, they’re placed fourth in their group, a gap of ten points on their hosts is likely to be too big a gulf to make up in the next four outings.

The reverse fixture, earlier in the qualifying phase, ended in a comfortable 6-0 away win for Portugal with Andre Silva grabbing a hat-trick. Ahead of what is likely to be another straightforward outing for the hosts on Thursday, The Hard Tackle takes a closer look at the encounter.

Fernando Santos has picked a strong squad for the latest round of international fixtures. But in what is expected to be another dominating outing for the hosts, the Portugal manager is likely to hand an opportunities to some of his fringe players.

The likes of Bernardo Silva and Gelson Martins are, thus, expected to start on Thursday, alongside Andre Silva, who has made a bright start to his senior career with Portugal. Bruno Fernandes, who has earned his first call-up to the national side could also feature and make his debut.

One player who is certain to start on Thursday is Cristiano Ronaldo. The Portugal captain is yet to feature for Real Madrid this season as he is serving a five-match domestic ban. Thus, with no real need to rest, the 32-year-old superstar is likely to lead his side’s attack.

At the back, Santos is missing the services of Nelson Semedo (suspension) and Raphael Guerreiro (foot). Cedric Soares and Eliseu are expected to take the spots on either side of defence, with Pepe and Bruno Alves likely to pair up at the heart of defence. 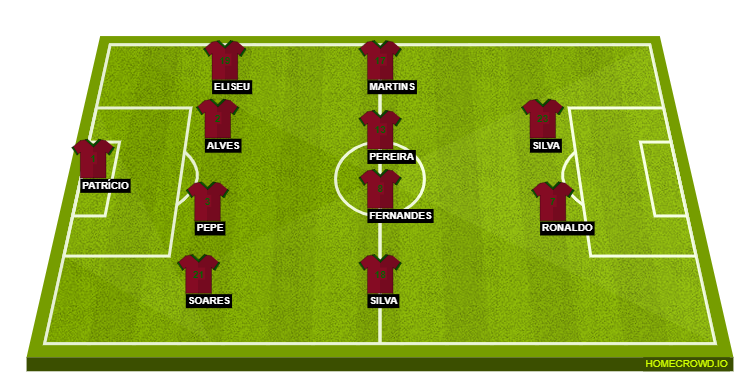 Lars Olsen’s men have been the surprise package of the qualifying campaign in Group B. Expected to be the bottom dwellers in their group, the minnows sent shockwaves when they beat Latvia last year.

A fourth place finish is beyond their wildest dreams, and while it can all still change remarkably, Faroe Islands have certainly exceeded expectation so far. However, ahead of the visit to the Bessa to face Portugal, there are a lot of improvements to be made.

The two goals against Latvia were the only time they have managed to find the back of the net in their campaign so far. On the other end of the field, Olsen’s men have borne a vulnerable look, conceding 10 goals – the bulk of which came against Portugal last year.

Thus, the onus will be on veteran defender and captain Atli Gregersen to marshall his troops from the back in order to frustrate their more illustrious hosts and perhaps even spring a surprise with a shock draw.

The Portugal captain has had a strange start to the season, having not featured for Real Madrid in La Liga due to a five-match domestic ban. In fact, he has only featured twice since the end of the Confederations Cup – substitute appearances in the UEFA Super Cup and the Spanish Super Cup first leg.

Other than that, he made another appearance in a friendly against Fiorentina last week. Therefore, the match against Faroe Islands presents the 32-year-old with the opportunity to play competitive football for the first time in three weeks.

Undoubtedly, Ronaldo will be raring to go and lead his side to another win to take them on the cusp of World Cup qualification. His presence would also be key for a largely inexperienced unit, and his performance would go a long way in determining the margin of the final outcome.

The World Cup qualifying campaign is in its climactic phase, with less than a year left before the tournament finally begins. In Group B, things are tight at the top, with Switzerland and Portugal separated by three points.

And while the match against the Faroes is unlikely to provide the Seleccao much cause for concern, winning by a big margin could help them boost their goal difference further, which would help them immensely should they end up level on points with the group leaders.

That being said, the match on Thursday is likely to be a one-sided affair, with Fernando Santos’ men expected to run riot. The Hard Tackle predicts a straightforward 4-0 win for Portgual.