The UEFA Champions League qualifying playoffs end this week following which the 32-team pool for the group stage will be complete. In what has been labelled as the marquee clash of this qualifying round, Liverpool play hosts to Hoffenheim in the second leg at Anfield on Wednesday night.

The Reds come into this match on the back of their first Premier League win of the season, a hard-fought 1-0 victory over Crystal Palace as Sadio Mane scored the only goal of the match to ensure Jurgen Klopp’s men took all three points from the clash.

Meanwhile, Julian Nagelsmann’s side kicked off their Bundesliga campaign with a win, overcoming Werder Bremen by the same scoreline as their Premier League counterparts to continue their stupendous unbeaten league run at Rhein-Neckar Arena.

Liverpool have the decisive advantage heading into Wednesday’s match though, having beaten the German side 2-1 in the first leg last week. Ahead of the crucial return leg, The Hard Tackle takes a closer look at the match.

The injury woes in Jurgen Klopp’s first-team squad are easing up, and the Liverpool boss has just four first-team players unavailable for the visit of Hoffenheim on Wednesday after Daniel Sturridge regained fitness last week.

Following Sturridge’s return, Nathaniel Clyne (back), Adam Lallana (thigh), Danny Ings (knee) and Philippe Coutinho (back) are the only ones left on the treatment table. Of these, Coutinho is the most high profile absentee, with his future being the subject of intense speculation.

Meanwhile, Mohamed Salah is likely to start on Wednesday after starting on the bench against Crystal Palace on Saturday. The Egyptian is expected to replace Sturridge in the starting lineup, with the English striker set to be eased into regular action.

Trent Alexander-Arnold, too, should be restored back into the lineup after being rested on the weekend. The likes of Andrew Robertson, who enjoyed an impressive debut against the Eagles, and James Milner are likely to keep their place in the eleven, in place of Alberto Moreno and Georginio Wijnaldum respectively. 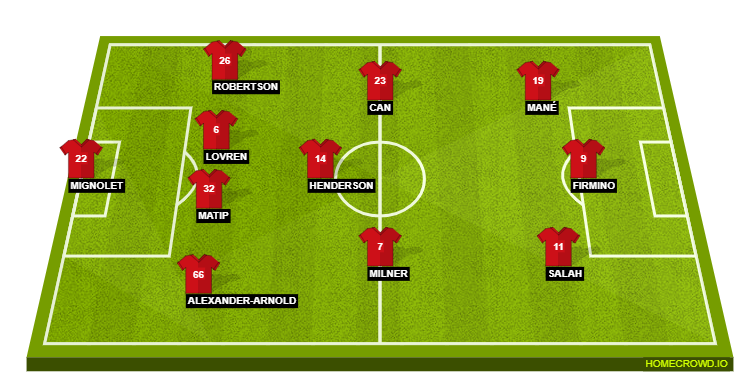 Unlike his counterpart in the Liverpool dugout, Julian Nagelsmann does not have any injury concerns whatsoever to deal with, and the Hoffenheim manager will take a full strength squad to Anfield for the crucial second leg.

The 30-year-old though, is expected to ring in the changes on Wednesday after keeping some of his key first-team players out of the starting eleven against Werder Bremen on the weekend. Sandro Wagner was the major absentee on Saturday, having been excluded from the matchday squad altogether.

However, the 29-year-old is expected to take up his place in the starting lineup on Wednesday. Meanwhile, the likes of Ermin Bicakcic, Eugen Polanski, Andrej Kramaric and Serge Gnabry all started on the bench on Saturday, but are expected to be restored back into the eleven against Liverpool.

Mark Uth could be the man to miss out on Wednesday despite scoring the vital goal for Hoffenheim in the first leg last week, making way for Kramaric. Kerem Demirbay, meanwhile, will be the key man to ensure a shock result for the visitors, as the main creative outlet in Nagelsmann’s side. 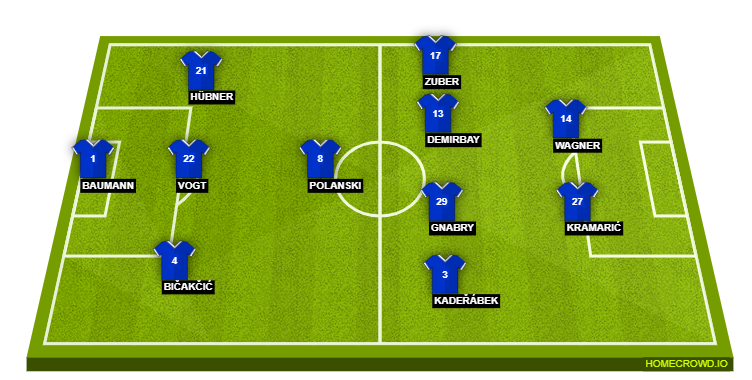 If there’s one player whose Liverpool career has been a complete roller coaster, it is Dejan Lovren. While his first two years at Anfield were nothing short of a struggle, the Croat managed to resurrect his career to an extent last season, forging a strong central defensive partnership with Joel Matip.

However, after a poor start to the 2017-18 season, and with Liverpool still in the market for a top centre-back, Lovren’s career is at a crossroads. But, games like Wednesday’s are those that can help the player go a long way at the Merseyside club.

A strong performance on Wednesday would not only help Lovren reclaim his place in the starting lineup but also help Liverpool neutralise the threat of the electric Hoffenheim attack to ensure smooth sailing into the group stage of the Champions League.

Liverpool have a vital advantage advantage heading into the second leg on Wednesday, having scored not one, but two away goals last week. Although Mark Uth’s late strike means that Hoffenheim still have a fair chance of progressing to the group stage of the Champions League.

Hoffenheim’s recent away goalscoring record, in addition to Liverpool’s well known frailties at the back mean that we have an enticing fixture on our hands, that promises to be a goal fest. But, the Reds’ front trio give them a distinct advantage, which is why The Hard Tackle predicts a hard fought 2-1 win for Klopp’s men.