Manchester City and Everton will be looking to continue their perfect start to the season when they face off at Etihad on Monday.

The curtains come down on the second gameweek of the Premier League on Monday as Manchester City play hosts to Everton at Etihad. Both sides started their campaigns for the season on a winning note and will be looking to continue building the momentum.

The hosts started their campaign with a hard-fought 2-0 win at Brighton, kicking off their quest to win silverware this season on a solid note. Meanwhile, Everton claimed all three points with a 1-0 win against Stoke City at home, with Wayne Rooney scoring on his second Premier League debut for the club.

The corresponding fixture last season was a closely contested affair with both sides sharing the spoils in a 1-1 draw. Ahead of their latest meeting on Monday, The Hard Tackle takes a closer look at the encounter.

Pep Guardiola is starting to mould the Manchester City to squad to his liking after spending north of £200 million in the transfer market this summer. And if their first match against Brighton is anything to go by, the Citizens are set to play a refreshing brand of free flowing football this season.

The Manchester City manager’s cause is further aided by the fact that he has very few injury concerns to deal with ahead of the visit of Everton, with only two key first-team players, in addition to two other fringe players, set to be absent from his matchday squad.

Ilkay Gundogan has made significant progress in his recovery from a long-term knee injury, making an appearance from the bench in the friendly against Girona. But, Guardiola said that the German will be eased into the side slowly, and is likely to spend some more time on the sidelines to build his fitness.

Summer signing Benjamin Mendy has also rejoined training after recovering from a thigh injury. But the Frenchman is also short of match fitness and will be unavailable for a few more weeks. Fabian Delph (match fitness) and Samir Nasri (neck) are the other two absentees from Guardiola’s squad. 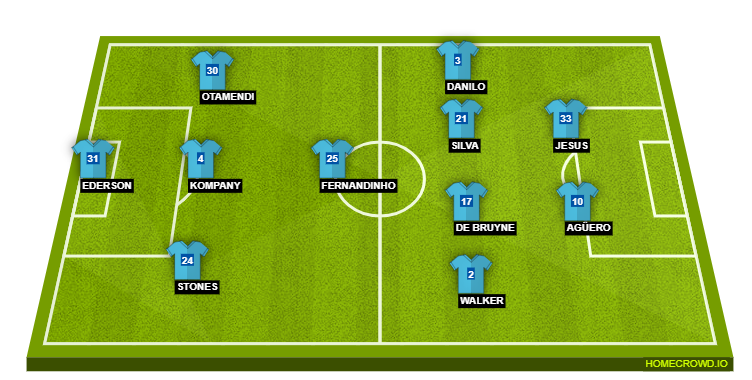 Unlike his counterpart in the Manchester City dugout, Ronald Koeman has a huge bill on his hands, with as many as five key first-team players set to miss the trip to Etihad on Monday with short-to-long-term injuries.

Wantaway attacking midfielder Ross Barkley is the most high profile absentee, sustaining a hamstring injury as speculation continues to mount on his future. Seamus Coleman is out with a broken leg and is unlikely to play again this year. But, Koeman has made reinforcements at right-back with Cuco Martina coming in.

Yannick Bolasie and Ramiro Funes Mori (both knee) are battling their respective long-term injuries too, and will be able to make a comeback in 2018. But James McCarthy could be available post the international break, providing the Everton boss some much needed respite.

Koeman is also sweating over the fitness of Sandro Ramirez, who has succumbed to a heel injury. But, the striker should be available to start. Meanwhile, latest summer arrival Gylfi Sigurdsson, who is Everton’s record signing, is all set to make his debut for the Toffees.

The Icelandic schemer, though, is unlikely to start with his match fitness in doubt after missing large parts of pre-season while at Swansea, amid weeks of speculation surrounding his move to Goodison Park. Expect the player to make an appearance off the bench. 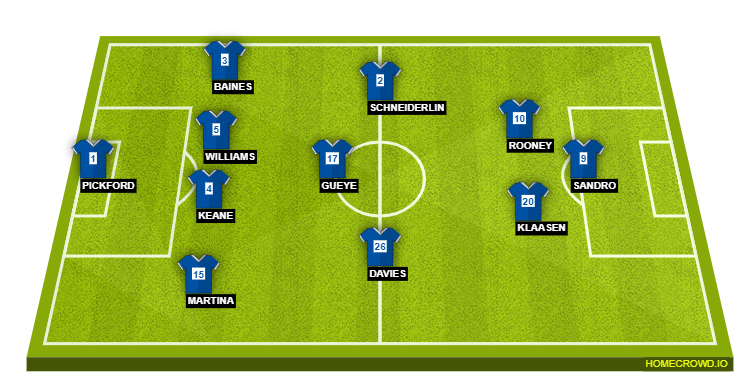 Idrissa Gueye was an inspired signing for Everton last season. Often going under the radar, the Senegalese midfielder, with his no-nonsense performances, was one of the best defensive midfielders in the Premier League.

With Everton set to be tested in a run of high profile encounters against the league’s bigwigs, the role of Gueye becomes the most crucial. The player will have the unenviable task of keeping Kevin De Bruyne and David Silva quiet and keep his side in the game against the attacking might of Manchester City.

At the same time, Gueye will also need to distribute the ball quickly to alleviate the danger and kick off his side’s attacks. His primary job, though, will be in his own half and as a busy night awaits the Senegal international, his performance will go a long way in determining the outcome on Monday.

After a hard-fought win to kick off their campaign in the Premier League this term, Manchester City have another tough prospect on their hands in Everton in their first home match of the season. This could, thus, be yet another match where patience could be the key to success for Pep Guardiola’s men.

Like the hosts, Everton have spent big in the summer, bringing in key reinforcements across the park. Their credentials as top four contenders, though, are set to be put to test in a run of key high profile fixture starting Monday.

Ronald Koeman’s sides are known to be gritty at the back as the Toffees showed on several occasions last season as well. But, Manchester City’s attacking riches could be too hot to handle for the visitors. Expect the match to be another closely contested affair though – a 2-1 win for Guardiola’s men.