Mexico and Russia end their group stage campaign in the Confederations Cup on Saturday in a virtual knockout to secure semifinal qualification.

The third and final round of the group stage in the 2017 FIFA Confederations Cup kicks off on Saturday. And in what is set to be a virtual knockout match for progression to the semifinal, Mexico and Russia face off against each other at the Kazan Arena for a place in the penultimate stage of the competition.

Mexico come into this match on the back of their first win in the tournament, as they overcame a stubborn New Zealand side 2-1 to remain level on points with group leaders Portugal with 4 points. In what was a hard fought match, quite literally, El Tri came from a goal down to remain on course for a place in the semis.

Meanwhile, Russia followed their win on the opening day of the competition with a 1-0 loss at the hands of Portugal, with Cristiano Ronaldo’s early goal proving to be the difference between the two sides. The result meant that the hosts now need three points in their final game to progress through to the semis.

Will there be similar celebratory scenes for El Tri on Saturday? (Photo courtesy – Patrik Stollarz/AFP/Getty Images)

The two sides last met way back in 1994 when a strong Russian side ran out 4-1 winners over Mexico. Ahead of their first meeting in 23 years, The Hard Tackle takes a closer look at the crunch group stage encounter.

Mexico boss Juan Carlos Osorio rang in the changes last time around against minnows New Zealand, as he gave a run to some of his second-choice players, with the likes of Javier Hernandez, Carlos Vela, Hector Herrera and Guillermo Ochoa all starting from the bench.

Ahead of the crucial final group stage game against Russia, though, Osorio is expected to go back to his strongest side in order to ensure a win and progression to the semifinals. However, the Mexico boss is set to be without the services of Carlos Salcedo who suffered a shoulder injury against New Zealand.

Having injured his acromioclavicular-joint ligaments, the 23-year-old has had to leave the Mexico camp and will take no further part in the tournament. Meanwhile, Hector Moreno is doubtful due to a muscle injury

In Moreno and Salcedo’s absence, captain Rafael Marquez is expected to line up alongside Nestor Araujo at the heart of the Mexican defence, with Miguel Layun and Diego Reyes on either side of the duo

Up front, striker Oribe Peralta is the unlucky man as he is likely to start from the bench despite scoring the winner against New Zealand, with Javier Hernandez set to return to the lineup. Jonathan dos Santos is also expected to be restored in midfield, with Osorio set to revert back to a 4-3-3. 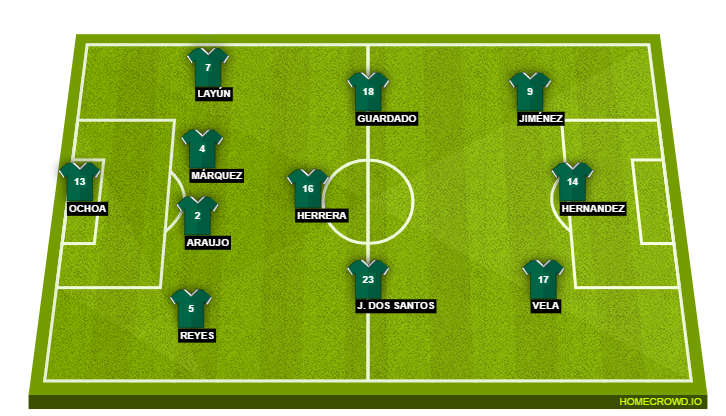 Russia need to bounce back from the disappointment of a 1-0 loss at the hands of Portugal in their previous game. And unlike his counterpart in the Mexico dugout, Stanislav Cherchesov has the luxury of picking his strongest possible side with no injury concerns whatsoever.

The Russia boss is expected to stick with his favoured system, with Georgy Dzhikiya, Viktor Vasin and Fedor Kudryashov continuing in the back-three. Midfield will be key to his side’s fortunes though, with the onus on attacking midfielders Aleksandr Golovin and Denis Glushakov to breach the Mexican defence.

The man under the spotlight, meanwhile, will be star striker Fedor Smolov. The Krasnodar striker has been in inspired form of late, having come off a productive season with his club in which he scored 23 goals in all competitions. And the 27-year-old will need to be at his best on Saturday in order to ensure a win for his side. 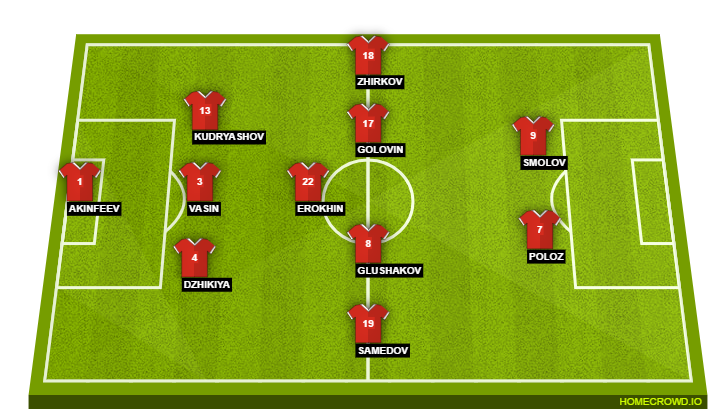 The match on Saturday is as key as it gets for both Mexico and Russia as a loss would mean the end of their run in the competition. And while Mexico can progress to the semifinals with a draw, the hosts can ill afford anything but securing the three points to make the Last 4 stage.

Neither side has been at their fluent best in the first two matches of the tournament, with fatigue proving to be a factor after a long drawn club season in Europe for most players. Russia, though, are expected to go all guns blazing in search of the win which could leave their defence vulnerable to a Mexican counter.

The return of Hector Herrera and Jonathan dos Santos to the starting lineup will be key for El Tri, as the duo can help the visitors control the midfield. Nevertheless, Mexico have enough quality in their squad to see the hosts through in the encounter. The Hard Tackle predicts a 2-1 win for Juan Carlos Osorio’s men.