Juventus will look to secure their place in the UEFA Champions League final when they host AS Monaco in the semifinal second leg on Tuesday.

Juventus play hosts to AS Monaco in the Champions League semifinal second leg at the Juventus Stadium on Tuesday, looking to progress to the final of the premier European club competition for the second time in three years.

Massimiliano Allegri’s men come into this match on the back of a disappointing 1-1 draw in the Turin derby against Torino. Despite the stalemate though, the Italian champions remained on course to defend their Serie A title – seven points clear of AS Roma with just three games left.

Meanwhile, Monaco returned to winning ways on the weekend as they comfortably beat relegation battling Nancy 3-0 at the Marcel Picot Stadium. The result restored their three-point lead over PSG and with a game in hand over the French champions, Monaco remain the favourites win the Ligue 1 title.

Higuain made the difference in the first leg with his brace. (Photo courtesy – Franck Fife/AFP/Getty Images)

The first leg at Stade Louis II ended in a convincing 2-0 win for Juventus, as Gonzalo Higuain struck a brace to hand the Bianconeri a decisive lead in the semifinal tie. The Hard Tackle takes a closer look at the second leg due to be played at the Juventus Stadium on Tuesday.

Massimiliano Allegri has no fresh injury concerns on his hands ahead of the visit of Monaco, as he has only two players sidelined with long-term injuries. Croatian winger Marko Pjaca (knee) and Italian defender Daniele Rugani (leg) will not feature again this season having sustained their respective injuries.

In fact, Allegri has only good news coming his way as Sami Khedira is available for selection once again after he had to miss the first leg due to suspension. The German midfielder is likely to be straight back into the starting lineup, with Claudio Marchisio expected to make way for him.

Juan Cuadrado is available as well after missing the first leg last week, but he is likely to be on the bench, with Allegri expected to continue with a back-three featuring Andrea Barzagli, Giorgio Chiellini and Leonardo Bonucci, with Dani Alves and Alex Sandro the wing-backs.

Meanwhile, Gianluigi Buffon, Miralem Pjanic and Gonzalo Higuain are set to return to the starting eleven after they were rested for the visit of Torino on the weekend. 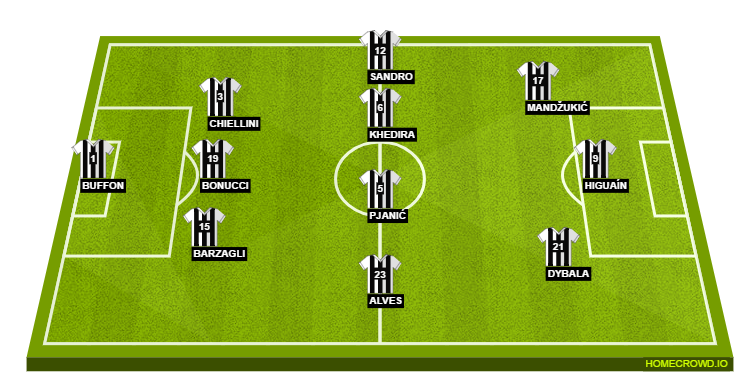 Like his counterpart in the Juventus dugout, Leonardo Jardim does not have any new fitness issues to deal with either, with Gabriel Boschilia the only long-term absentee due to a knee injury. The Brazilian is unlikely to feature again this season.

However, the Monaco boss continues to sweat over the fitness of French defender Benjamin Mendy, who is struggling with a hamstring injury. Mendy’s compatriot, Djibril Sidibe is, thus, expected to continue on the left side of the Monaco defence, with Nabil Dirar deployed as right-back.

Tiemoue Bakayoko played with a broken nose in the first leg last week, and he is set to continue playing with a mask in the crucial second leg on Tuesday, with Fabinho as his partner at the heart of midfield.

Meanwhile, the onus will be on Monaco’s attacking players Bernardo Silva, Thomas Lemar, Kylian Mbappe and Radamel Falcao to find a way past the solid Juventus defence and, more crucially, Gianluigi Buffon, who thwarted all of their attempts emphatically at Stade Louis II last week. 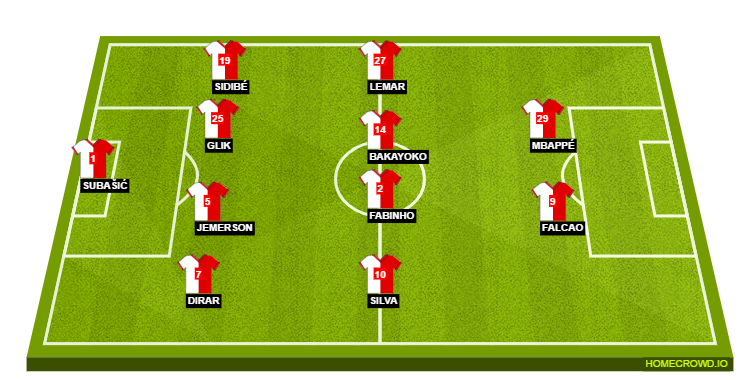 The Monaco captain will have to be at the top of his game on Tuesday. (Photo courtesy – Valery Hache/AFP/Getty Images)

AS Monaco face an uphill task to overturn the two-goal deficit from the first leg at Stade Louis II. That is something that has never been done in the history of the Champions League knockout stages.

Thus, with such a seemingly tough ask on their hands, the spotlight will be on their young and exciting attack to be at their dominating best in order to get past the well-drilled Juventus defence. The onus in particular, will be on Radamel Falcao to lead the young attacking unit with his wealth of experience.

The Colombian striker has often looked like the player who was once regarded as one of the best players in the world this season, combining superbly with Kylian Mbappe in front of goal.

Falcao looked a pale shadow of himself in the first leg last week when the Juventus defenders deprived him of making any sort of impact on the match. However, if he can reproduce the form from the last two stages, Monaco will have a genuine chance of reaching the final.

Juventus produced a professional performance in the first leg last week as they overcame one of the most dangerous teams in the Champions League this season with relative ease. Not giving the Monaco attack much of a sniff at goal, the visitors made their experience count to come out on top.

The task at hand for Leonardo Jardim’s men on Tuesday is even tougher now, as Juventus are unbeaten in their last 18 Champions League games at home. On top of that, Monaco’s record in Italy makes for dismal reading, having not won in seven attempts in the country.

Juventus haven’t conceded a single Champions League goal for more than 10 hours now, and it is hard to see a well organised defence concede many on Tuesday, if at all. Hence, The Hard Tackle predicts a well-controlled 1-0 win for Massimiliano Allegri’s men, and progression into next month’s final.