Real Madrid will look to continue mounting the pressure on Barcelona when they host Valencia at the Santiago Bernabeu on Saturday.

Just five games remain in the league for Real Madrid, and things are as tight as they have ever been this season at the top of the table. Real Madrid and Barcelona are level on points. But, Los Blancos have a chance to grab a temporary lead on Saturday when they play hosts to Valencia at the Santiago Bernabeu.

Zinedine Zidane’s men come into this match on the back of the thumping 6-2 win at Deportivo La Coruna on Wednesday, an emphatic response to the disappointing 3-2 loss at the hands of their arch rivals in the El Clasico last weekend.

Meanwhile, Valencia lost 3-2 to Real Sociedad at the Mestalla in their most recent outing. Los Che are now winless in their last three games and lie 12th in the La Liga table, five points adrift of a place in the top half.

The reverse fixture ended in a 2-1 win for Voro’s men as early goals from Simone Zaza and Fabian Orellana condemned Real Madrid to the shock result. The Hard Tackle now takes a closer look at the meeting between the two sides that is set to take place at the Bernabeu on Saturday.

Zinedine Zidane does not have a lot of injury concerns to deal with ahead of the visit of Valencia, but two of the most integral members of his squad are the ones who are sidelined with fitness issues.

Pepe has been sidelined since early April with a fractured rib, and there’s no date earmarked for his return. The Portuguese centre-back was joined by Gareth Bale on the treatment table last weekend as he sustained a calf injury that will put him on the sidelines for two more weeks.

But the Real Madrid boss is set to welcome captain Sergio Ramos back to his match day squad on Saturday after he served the one-match ban against Deportivo following his dismissal against Barcelona last weekend. The Spaniard will be partnered by Nacho at the heart of the Real Madrid defence.

Toni Kroos and Cristiano Ronaldo are also set to return to the starting lineup after the duo were handed the night off for the midweek game. Bale’s position in the eleven is likely to be taken up by Isco, with Karim Benzema also expected to start after Alvaro Morata played his rotation game against Deportivo. 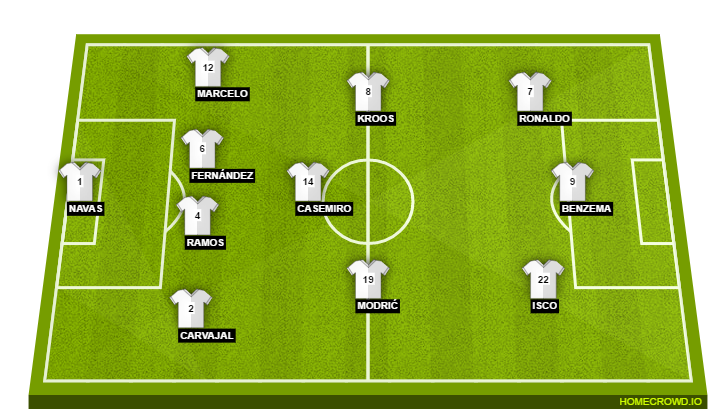 Zidane’s counterpart in the Valencia dugout Voro, on the other hand, has a number of key first-team players absent through suspension and fitness issues for the trip to the Spanish capital. The Valencia boss is set to be without the services of as many as five first-team players.

Defence is the worst-hit area, with Joao Cancelo suspended for the match against Real Madrid while Aymen Abdennour is sidelined due to a leg injury. Left-back Jose Gaya, meanwhile, has returned to training after stepping up his recovery from a muscle injury, but the trip to the Bernabeu may come too soon for him.

Star striker, Simone Zaza is also unavailable for the match on Saturday after he too picked up a one-match ban in the loss to Real Sociedad for collecting his fifth booking of the season. Fellow striker Rodrigo is a long-term absentee for Valencia after injuring his ankle back in January.

In the absence of Zaza, the highly-rated Santi Mina is set to lead the line on Saturday, with Nani and Munir El-Haddadi providing the firepower from the wings. Martin Montoya and Guilherme Siqueira are likely to take the place of Cancelo and Gaya respectively 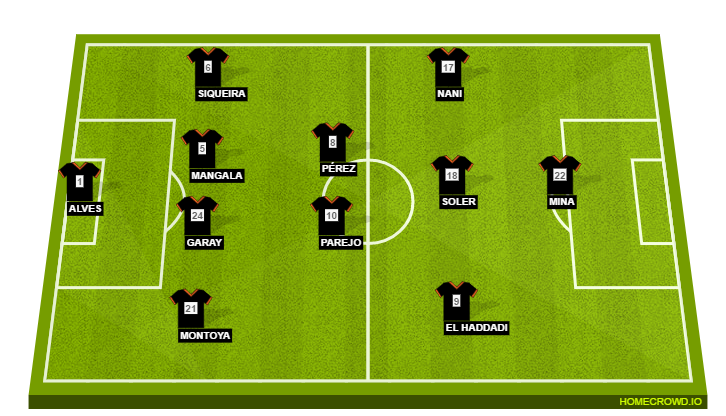 It’s hard to argue that any player other than Isco has been better for Real Madrid in La Liga in 2017. Often chosen in the games in which the stalwarts are given a rest, the Spaniard has time and again provided a reminder of why he continues to remain highly rated across Europe.

Isco has scored the most number of goals for a midfielder in La Liga in 2017 (8), and the injury to Bale now provides him the opportunity to play a more regular part in the first-team. He is likely to start on the right side of the front trio alongside Karim Benzema and Cristiano Ronaldo on Saturday.

His clever change of pace and piercing passes between the lines are often menacing for the opposition defenders, and he will need to produce all that and more on Saturday to ensure that Valencia don’t do a shock double over Real Madrid. Time to grab the opportunity with both hands.

So, less than a month of La Liga action remains and there is little room for error on the summit of the Spanish top flight, with Real Madrid and Barcelona locked on equal number of points. Zinedine Zidane has already acknowledged that his side have five cup finals remaining in the league and the first one comes on Saturday.

Valencia have been somewhat of a bogey side for Real Madrid in recent seasons, having been beaten just once in their last five visits to the Santiago Bernabeu. Having said that, the corresponding fixture last season did end in a win for Los Blancos.

This time around, Valencia also come into this game in a poor run of form, and with players like Isco and Cristiano Ronaldo being in form this could be a long night for Voro’s men. The Hard Tackle predicts a comfortable 3-1 win for Real Madrid.