It’s Gameweek 35 in the Premier League, and with the stakes being so high at both ends of the table, Middlesbrough play hosts to Manchester City at the Riverside Stadium on Sunday, when three points can make all the difference.

Steve Agnew’s men come into this match on the back of a hard-fought 1-0 win over Sunderland on Wednesday. That result was their first league win in 2017, and while they did nothing to lift them off 19th in the Premier League table, they lived to fight another day in their battle for survival.

The visitors, meanwhile, played out a goalless draw against neighbours Manchester United in the Manchester Derby on Thursday. The stalemate kept them in fourth place in the league table, a point ahead of Jose Mourinho’s men and one behind Liverpool who have played a game more.

The reverse fixture at the Etihad Stadium ended in a 1-1 draw as Marten De Roon struck an injury-time equaliser to ensure a share of the spoils. As the two sides meet for the final time this season, The Hard Tackle takes a closer look at Sunday’s match.

Steve Agnew does not have many injury concerns on his hands ahead of the visit of Manchester City on Sunday, but the Middlesbrough interim boss does have three key first team players unavailable for the match due to fitness issues.

Spanish defender Daniel Ayala is a major doubt for the match after he had to be withdrawn from the match against Sunderland due to a twisted ankle. If the game comes too soon for him, Antonio Barragan could return to the side after he was overlooked for the midweek game, with Calum Chambers slotting in as the centre-back.

Meanwhile, Victor Valdes (rib injury) and midfielder Grant Leadbitter (hamstring) are also doubtful for the clash on Sunday, having already missed the last couple of games due to their respective fitness issues.

The big positive for Steve Agnew, though, is that Gaston Ramirez is available once again after he served his one-match ban following his dismissal against Bournemouth last weekend. The Uruguayan is likely to slot right back into the starting lineup, and will be a key player for Middlesbrough alongside former City striker Alvaro Negredo. 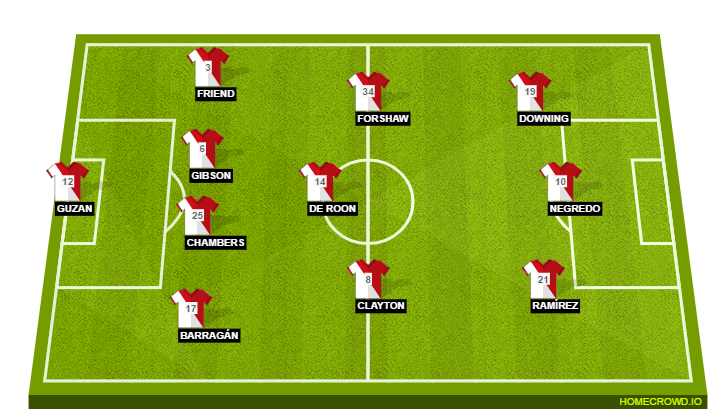 Manchester City manager Pep Guardiola, too, has concerns over the fitness of three integral members of his squad. Of these, Claudio Bravo is a certain absentee after he sustained a calf injury in the match against Manchester United on Thursday.

The latest reports suggest that the Chilean goalkeeper is set to miss the remainder of the season, meaning Willy Caballero is set to step up between the stick in his stead. Meanwhile, Guardiola is sweating over the fitness of David Silva and John Stones, both of whom missed the derby on Thursday.

Silva is struggling with a hamstring injury, and his availability is touch and go, while John Stones is having trouble with a problem in his leg. Vincent Kompany and Nicolas Otamendi should continue to play at the heart of the Manchester City defence in Stones’ absence. 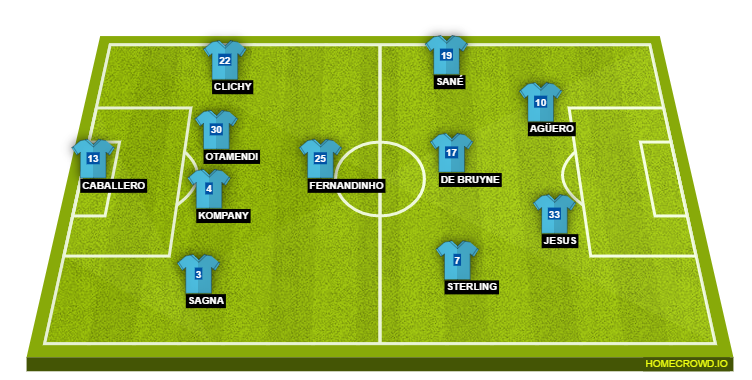 Gabriel Jesus has arguably been one of the most exciting debutants in the Premier League this season, having scored three goals and provided an assist before an ankle injury sidelined him for two months.

The Brazilian only joined Pep Guadiola’s squad in January, but his electric performances have already earned him a fan in the Manchester City boss, who favoured him over the prolific Sergio Aguero before he sustained the unfortunate injury.

This time around though, Aguero has been in a terrific run of form, and it looks likely that both the South American strikers will start together in most of the remaining games, with Guardiola hinting the same. The Brazilian must now this opportunity with both hands to end the season on a high, and keep him firmly in his manager’s plans.

It is that stage of the season when teams at either ends of the table just can’t afford to slip up. Middlesbrough need maximum points in most of their remaining games to ensure an unlikely survival while Manchester City need all the points they can get to keep themselves in the Top 4.

Goals, though, have been hard to come by for Steve Agnew’s men, who have found the back of the net the least number of times in the Premier League this season. Pep Guardiola’s men don’t have any such trouble, meanwhile, with Sergio Aguero and Kevin De Bruyne being in a terrific run of form.

With points being as good as gold dust for Middlesbrough, they are likely to have a good go at it, which might cost them as the game wears on, with City being so clinical and deadly in the final third. The Hard Tackle, thus, predicts a comfortable 2-0 win for Pep Guardiola’s men.