Chelsea travel to Everton to take on an in-form side, in what is the most crucial away trip of the season for the Blues

Almost a year to the day since Leicester were officially crowned champions of England, the also-rans then are the protagonists now. A come-from-behind draw for Chelsea ensured the trophy headed to the King Power then, it certainly looks to be headed to London now.

Whether it is the west or north should be, in all probability, decided this weekend. Two cup finals for two teams on the brink of history. Spurs, a team resurgent under an Argentinian boss, looking for their first title in 56 years take on their fiercest rivals Arsenal – the last derby ever at White Hart Lane.

While their (equally despised) neighbours Chelsea travel to Merseyside to take on an Everton side on a 8-game winning streak at home. It all boils down to this, the intense atmosphere at Goodison awaits the Blues, while about 300 miles south-east, a derby to decide the title.

For all practical purposes, however, the title may not be over mathematically till the penultimate round of matches. But seeing how the fixtures compare for both contenders, this weekend has to be it. A win for Chelsea, and the title is almost within reach, anything less than that, Spurs can still hope.

The Toffees will be without the services of James McCarthy, Funes Mori and Yannick Bolasie while Aaron Lennon is also a doubt for the game.

An attack-minded 4-3-3 is what the home team will be expected to line up in. Morgan Schneiderlin will sit in front of the back four, while also linking up attack and defence. The team have scored 29 goals at home in their 8-game undefeated streak, an astounding average of 3.6 goals per game.

Romelu Lukaku is in the form of his life at the moment and will be expected to be a nuisance to Chelsea’s defenders on the day too. His pace and the ability to run the channels makes him dangerous and given Chelsea’s recent defensive frailities, he should be licking his lips at the prospect.

A 14-point gap over West Brom in 8th and still a chance for them to fight for European places, the Toffees having nothing to lose from this match. Hence, they will be even more dangerous and difficult to beat. Add to that the raucous Goodison atmosphere, the away team won’t be very comfortable at any point during the match. 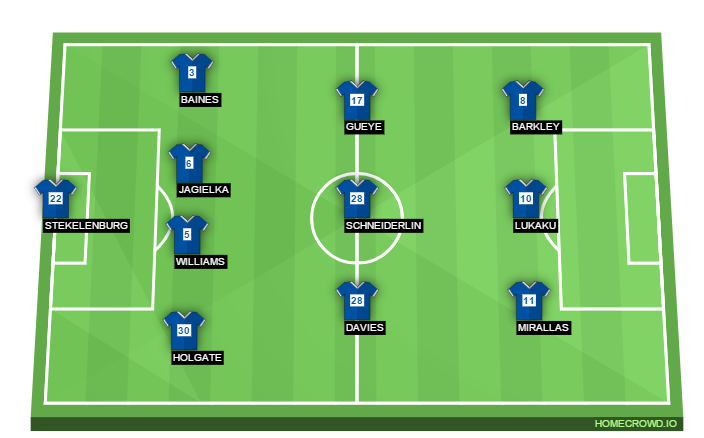 Antonio Conte has been lucky with injuries this season, so much so that he has been able to field almost the same eleven consistently in the league. He comes into this match too with no injury or suspension worries.

His now regular 3-4-3 should be employed this time around too, with N’Golo Kante and Nemanja Matic sitting in front of the back-four.

Given that this is the Blues’ third match in the time their opposition has only played one, some rotation could be expected, especially on the wings and in midfield.

To counter Everton’s pacy counter-attacks, a strong midfield could be key in stopping those. With that in mind, the more defensively minded Matic could be given a start ahead of Cesc Fabregas, while Pedro could start ahead of Willian on the right wing.

Chelsea’s defence has been leaky recently, with the team failing to keep a clean sheet in the last 11 games. That along with Everton’s fantastic home record should make for a tasty encounter. 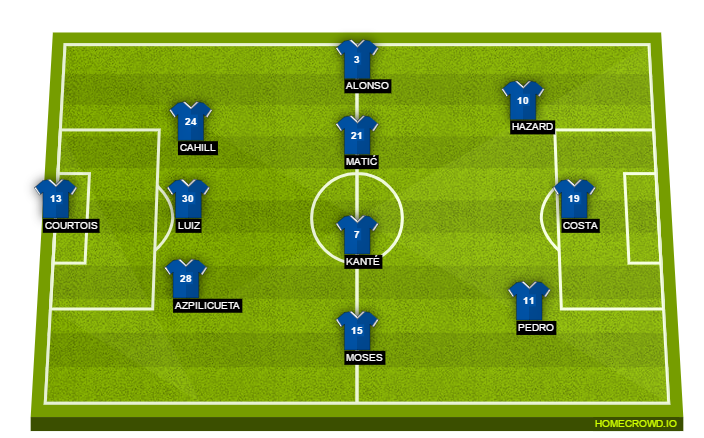 A solid peformance coming off the bench in the FA Cup semi-final which was followed up with a brace against Southampton, the Spaniard seems to have hit form.

Always a nuisance for defenders especially when he starts scoring goals, his overall contribution to Chelsea’s game has also been impressive. His link up play with Eden Hazard will be the one to watch out for the Everton back four.

The impressive form that the Toffees have been in at home clashes with Chelsea’s fantastic away record, and we expect them to cancel each other out.

A draw would make the title race even more interesting and should Spurs manage to win the derby, the gap will be down to just 2 points. All the pressure will then be on the Blues not to slip up.