The final Manchester Derby of the season is upon us as Manchester City play hosts to Manchester United at the Etihad Stadium on Thursday night. With just a few more games left to go, this match is as big as they come in the race to finish in the Top 4.

Pep Guardiola’s men were not in league action on the weekend, and come into this match on the back of a 2-1 extra-time loss to Arsenal in the FA Cup semifinal, as they surrendered the lead to bow out of the last piece of silverware they were competing for this season.

On the other hand, Manchester United continued their recent winning run going on the weekend, as a depleted side overcame Burnley 2-0 thanks to goals from Anthony Martial and Wayne Rooney. The result kept them 5th in the Premier League table, but they are now just a point behind City.

Who will come out on top in the last meeting between Pep Guardiola and Jose Mourinho this season? (Photo courtesy – Laurence Griffiths, Stephen Pond/Getty Images)

The reverse fixture earlier in the season at Old Trafford ended in a 2-1 win for City as goals from Kevin De Bruyne and Kelechi Iheanacho gave Guardiola’s side an early lead before Zlatan Ibrahimovic scored a consolation goal. The Hard Tackle takes a closer look as the two city rivals face off for the final time this season.

Pep Guardiola does not have any major injury concern on his hands ahead of the visit of Manchester United, but the City boss is sweating over the fitness of two key players in his first-team squad for Thursday night’s match.

David Silva is a major doubt for the derby, as he continues to recover from the injury that forced him to be taken off midway through the first half of the FA Cup semifinal on Sunday. The Spaniard’s fitness will continue to be monitored ahead of the match on Thursday, but he is unlikely to feature.

Fernandinho is also doubtful for Manchester United’s visit, but he has trained without any issues this week and is expected to start. Sergio Aguero was another fitness concern for Guardiola after being taken off in extra time against Arsenal, but the Argentina striker is fit to start.

Meanwhile, teenage sensation Gabriel Jesus is also available after he returned to training earlier this week, but he is likely to be used as an impact sub, instead of starting right from the off. John Stones could play a part too, and his availability will be assessed via a fitness test prior to the match. 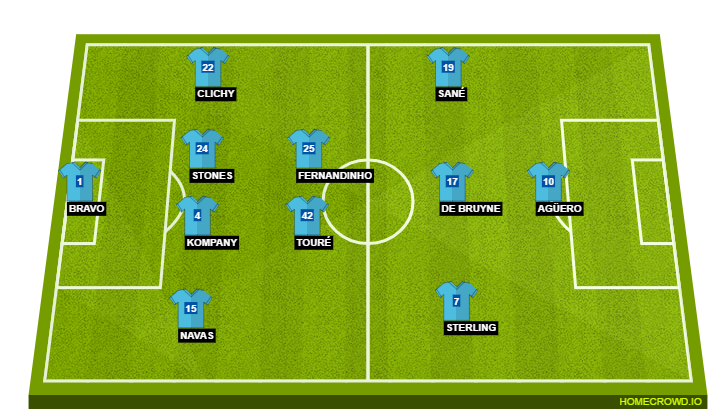 Guardiola’s counterpart in the Manchester United dugout, Jose Mourinho, meanwhile, will be facing a big test as far as fitness issues are concerned, as injury woes continue to mount for the Red Devils boss ahead of the trip to the Etihad Stadium.

So much so, that the Manchester United boss is set to be without the services of six key first team players for Thursday’s match. Paul Pogba is the latest player to join the treatment table, and he has been ruled out with a hamstring injury that he picked up against Burnley on the weekend.

He has now joined Chris Smalling (knee), Phil Jones (foot) and Juan Mata (groin) on the sidelines, and none of these players are expected to feature for Manchester United until May. Zlatan Ibrahimovic and Marcos Rojo (both knee) have had their season ended prematurely, and will miss several months of action.

Meanwhile, Ander Herrera, Antonio Valencia and Eric Bailly are fit, and are expected to start on Thursday. Also likely to start are Marcus Rashford, Henrikh Mkhitaryan and Jesse Lingard, who were all on the bench on Sunday. Anthony Martial should retain his place in the lineup after an impressive outing against Burnley. 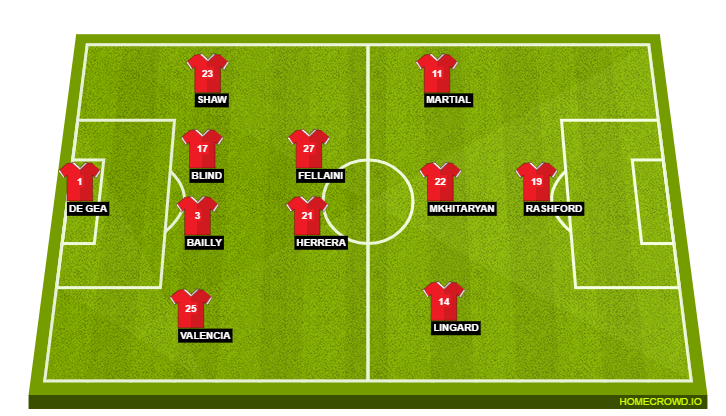 It has been a season of resurgence for Ander Herrera at Manchester United, and a season where he has established himself as a man for the big occasions. Often the go-to man for Jose Mourinho, Herrera’s tenacious performances in midfield have often been key for the Red Devils.

The outing against Chelsea was another example of just how influential the Spaniard has become for Manchester United this season, as his impeccable man-marking rendered Eden Hazard a mere passenger in the match.

On Thursday, he could be tasked with a similar job – to mark Kevin De Bruyne, City’s orchestrator in midfield. If he succeeds in this task on Thursday, he could well set Manchester United on the path to victory, thereby helping them leapfrog City into fourth place.

Just six games remain in the Premier League for both Manchester United and Manchester City – six games that will be crucial in deciding which team plays in the Champions League and which team has to contend with a place in the gruelling test that is the Europa League.

The two sides come into this match with contrasting runs of forms, as Manchester United are unbeaten in 23 Premier League outings, while City have won just twice in their last six competitive matches.

Having said that, the match at the Etihad will be a stern test for the depleted Manchester United defence, and the back four will have to remain alert at all times. Vincent Kompany and co. will also face a test against a rapid Manchester United attack that only recently dismantled Chelsea.

Thus, with a lot on the line, the game is likely to be won and lost in the midfield, and there is very little to separate the two sides on all counts. The Hard Tackle, therefore, predicts a closely contested 1-1 draw, as old foes Pep Guardiola and Jose Mourinho face off one last time this season.