Barcelona will look to get their charge for the La Liga title back on track when they host Real Sociedad at Camp Nou on Saturday.

The games are coming thick and fast for Barcelona, who return to league action on Saturday following midweek Champions League football. And they will be looking to keep the pressure on Real Madrid as Real Sociedad come visiting at Camp Nou.

Luis Enrique’s men come into this match on the back of a damning 3-0 loss in the first leg of their UEFA Champions League quarterfinal tie against Juventus. That result was the second loss in a row for Barcelona after they succumbed to a 2-0 loss at Malaga last weekend.

Meanwhile, Real Sociedad come into this match full of confidence after they put Sporting Gijon away in a 3-1 win at the Anoeta on the weekend. That win saw La Real overturn a four-game winless run that had saw them slip behind in the race for a place in the Top 4.

The reverse fixture saw Barcelona continue their winless run at San Sebastian, as the Blaugrana held Real Sociedad to a 1-1 draw, thanks to Lionel Messi cancelling out Willian Jose’s headed effort. Ahead of the fourth meeting between the two sides in all competitions this season, The Hard Tackle takes a closer look at Saturday’s match.

Luis Enrique does not have many major injury concerns on his hands ahead of the visit of Real Sociedad on Saturday, but he does have one major absentee in Brazilian forward Neymar, who is suspended after being sent off in the loss to Malaga last weekend.

Neymar was initially suspended for just Saturday’s match but the duration of the ban was increased to three games after he sarcastically applauded on his way off the field. Crucially, the suspension will see the Brazil international miss next week’s El Clasico, leaving the Barcelona boss with a big problem on his hands.

Neymar’s place in the starting lineup could be taken up by Paco Alcacer, who hasn’t had much of a chance to impress this season. Arda Turan could also be an unlikely replacement, having stepped up his recovery from a groin injury, but this game could come too soon for him to start right from the off.

Meanwhile, Gerard Pique and Ivan Rakitic are expected to return to starting eleven after missing the trip to Malaga last week due to suspension. But, Aleix Vidal (ankle) and Rafinha (knee) are out for the remainder of the season, with Javier Mascherano doubtful with a calf injury. 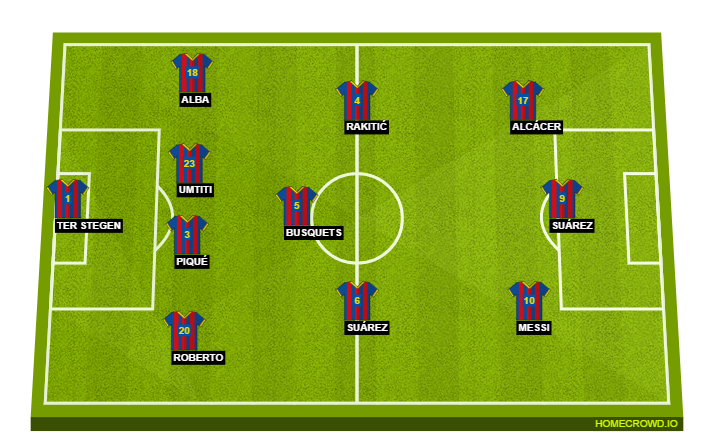 Unlike his counterpart in the Barcelona dugout, Eusebio Sacristan does have quite a few personnel availability issues on his hands, with as many as four first team players missing the trip to Camp Nou on Saturday due to injury concerns and suspension.

The biggest of the absentees is Spanish forward Juanmi, who will not play any part on the weekend due to suspension, after picking up his fifth yellow card of the seasons against Sporting Gijon.

Meanwhile, right-back Alvaro Odriozola is another major unavailable player on Saturday as he is yet to recover from the muscle injury he sustained in Real Sociedad’s match against Atletico Madrid earlier this month. In his stead, young defender Joseba Zaldua is set to retain his place on the right side of the defence.

Right-back Carlos Martinez (cruciate ligament rupture) and forward Imanol Agirretxe (knee) are the long-term absentees for the Real Sociedad boss. Yuri Berchiche and Raul Navas are doubtful for the fixture but the duo are likely to be fit enough to start the match on Saturday.

The player in focus for the visitors will certainly be the goalscorer in the reverse fixture, Willian Jose who will spearhead the Real Sociedad attack yet again on Saturday. The Brazilian striker, alongside Carlos Vela will have to be at their best in order to ensure Real Sociedad get anything from the game. 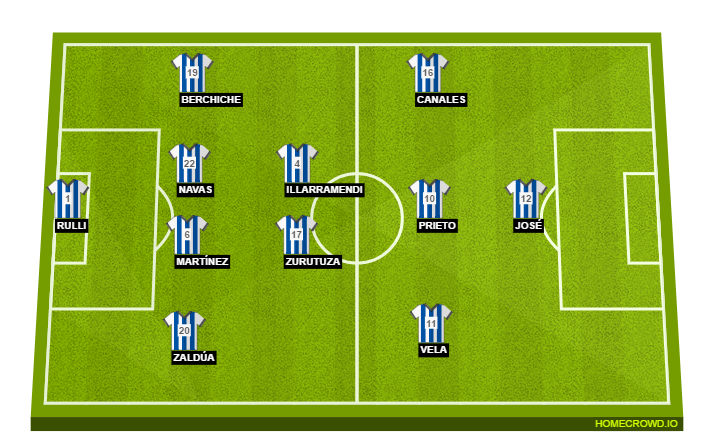 Will it be another close match between Barcelona and Real Sociedad? (Photo courtesy – David Ramos/Getty Images)

This is a match in which the stakes are as high as they get. Barcelona have fallen behind in the race to win the La Liga title, 3 points adrift of Real Madrid having played a game more. Meanwhile, Real Sociedad are vying for a place in Europe themselves and need all the points that they can win.

More crucially for Barcelona, a season defining meeting with Real Madrid beckons them next week, ahead of which building momentum is key. And after losing two games in a row, a win will perhaps hand them the most important three points of the season.

However, they must be vary of the threat posed by Real Sociedad, especially keeping in mind how vulnerable their defence has been all through the league campaign. Neymar’s absence will be key, with the Brazilian being Barcelona’s best player this season.

With his playmaking abilities missing on Saturday, this could be a closely contested affair. The Hard Tackle predicts a hard-fought 2-1 win for Barcelona.