The quarterfinals of the UEFA Champions League kick off on Tuesday as Borussia Dortmund host AS Monaco at the Signal Iduna Park.

European football returns with the quarterfinals of the UEFA Champions League, with the first leg of the stage all set to begin on Tuesday. The first match of the Last 8 stage draws two of the most exciting teams in this year’s competition as Borussia Dortmund play hosts to AS Monaco at the Westfalenstadion.

Both sides have had contrasting fortunes in their respective domestic leagues this season. Dortmund are enduring a stuttering campaign to sit third in the Bundesliga table, while Monaco enjoy a comfortable lead over French champions Paris Saint-Germain in Ligue 1.

Thomas Tuchel’s men come into this match on the back of a humbling 4-1 loss to Bayern Munich in the Der Klassiker that left them 18 points adrift of the German champions. They beat Benfica with an aggregate scoreline of 4-1 in the Round of 16 to set up a quarterfinal date with Monaco.

The visitors, meanwhile, are enjoying a terrific run in Ligue 1 that continued with a 1-0 win at Angiers on Saturday to remain 3 points in the lead. They progressed to the quarterfinals after playing the standout tie of the previous round, as they came through on away goals following a 6-6 goal fest with Manchester City.

As another high scoring encounter beckons for the two sides in the quarterfinals, The Hard Tackle takes a closer look at the first leg of the tie at the Signal Iduna Park on Tuesday.

Thomas Tuchel has several injury concerns to deal with ahead of the visit of Monaco on Tuesday, with the Dortmund boss sweating over the fitness of a number of his key first team players. In addition to that, Raphael Guerreiro and Marcel Schmelzer are one booking away from being suspended.

Marco Reus (hamstring) has returned to first-team training and remains in contention to play his first match in more than a month, while the likes of Shinji Kagawa (muscular), Andre Schurrle (Achilles), Julian Weigl (thigh) and Lukasz Piszczek (back) are all doubtful after missing the trip to the Allianz Arena on Saturday.

Meanwhile, Mario Gotze is set to miss the remainder of the season due to illness, while Erik Durm is also unavailable due to a muscular injury, thus leaving Tuchel with a considerable job on his hands to prepare for the goal hungry Monaco.

However, he still has a lot of firepower up front to deal a hammer blow to the hopes of the principality club on Monday, with Ousmane Dembele and Christian Pulisic supporting Pierre-Emerick Aubameyang. The three stalwarts will be given the license to unleash their best in a bid to get a step closer to the semis. 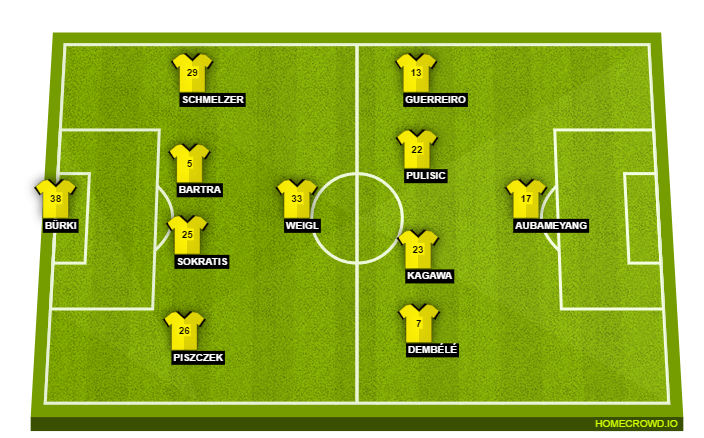 Leonardo Jardim, meanwhile, does not have the misfortune of having several key players battling fitness issues. Having said that, he is still set to be without two of his most important players in the trip to Dortmund.

Defensive midfielder Tiemoue Bakayoko is suspended for the first leg after picking up a booking in the second leg of the Round of 16 match against Manchester City. Right-back Djibril Sidibe is also set to be unavailable for a second game running, after being hospitalised with appendicitis over the weekend.

Bakayoko’s absence is set to hurt a Monaco side that has been susceptible all through the season, with his regular partner Fabinho too expected to slot in as right-back following Sidibe’s unavailability. In the duo’s absence Joao Moutinho is expected to provide cover to the fragile back four.

Giving him company will be the versatile midfield duo of Bernardo Silva and Thomas Lemar, Meanwhile, the spotlight will once again be on French prodigy Kylian Mbappe who, along with Radamel Falcao – fit again after missing the second leg against City due to a hip injury, will be expected to grab the all-important goals on Tuesday. 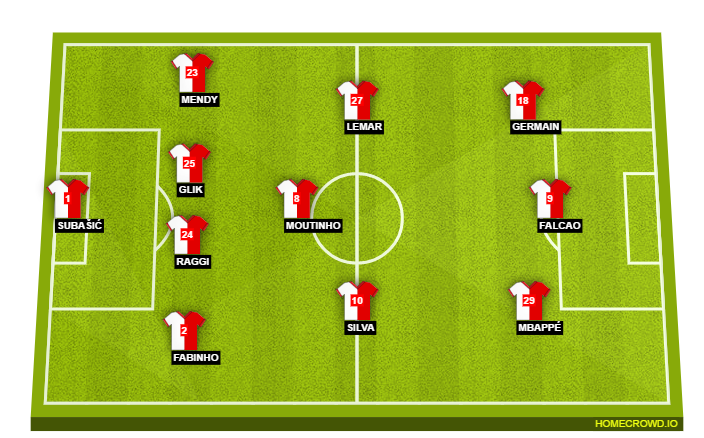 The quarterfinal has draw produced some interesting meetings, with Barcelona and Real Madrid up against two other European powerhouses in Juventus and Bayern Munich, while surprise package Leicester City will look to carry on their big cup run against Atletico Madrid.

But no other meeting seems to have created as big an excitement around it as this game, with two of the most prolific sides in this season’s competition being drawn up against each other. Both sides have been scoring bagful of goals all through their respective campaigns and this match isn’t expected to be anything short of a goal fest.

Having said that, Monaco will be hurt by the absence of Tiemoue Bakayoko and Djibril Sidibe that leaves their midfield short of providing defensive cover. Dortmund are missing key players too but have ample cover in attack to torment the visiting side’s defence on Tuesday.

Expect this to be a keenly contested affair, but the key battle in midfield is likely to pull Thomas Tuchel’s side through in the first leg. The Hard Tackle predicts are hard-fought 3-1 win for Dortmund in this tie.