Chelsea will look to maintain their lead at the top of the table when they visit the Vitality Stadium to take on AFC Bournemouth on Saturday.

Gameweek 32 of the Premier League is here and table toppers Chelsea resume league action on Saturday eager to get one step closer to lifting the title come May when they take the trip down south to play AFC Bournemouth at the Vitality Stadium.

Eddie Howe’s side come into this match on the back of an impressive 2-2 draw against Liverpool at Anfield, as Joshua King struck a late goal to ensure a share of the spoils with the Reds. The Cherries have picked up form since the start of March, with a five-game unbeaten run pulling them clear off the relegation battle.

Eden Hazard was on fire as the False nine in the reverse fixture at Stamford Bridge. (Photo courtesy – Ben Stansall/AFP/Getty Images)

The runaway leaders, meanwhile, continue to grow from strength to strength in the campaign, with a comfortable 2-1 win over Manchester City in their previous match two days ago to maintain a seven-point lead at the top of the table, thanks to a brace by Eden Hazard.

The reverse fixture ended in an emphatic 3-0 win for Chelsea, as Pedro and Eden Hazard struck two superb goals before the two combined in Steve Cook’s own goal in the dying moments of the match. The Hard Tackle takes a closer look at the match at Saturday’s match.

Bournemouth manager Eddie Howe has a few personnel availability concerns to deal with, with as many as six players missing due to suspension and fitness issues, thus hampering his preparations ahead of the visit of Chelsea.

Defender Tyrone Mings is suspended for the match as he serves the last of his five-match ban for a stamp on Zlatan Ibrahimovic last month. Winger Junior Stanislas is sidelined with a groin injury while Andrew Surman is recovering from a knee problem.

Callum Wilson, Adam Federici and Rhoys Wiggins are all also on the treatment table, having sustained long-term knee injuries. Meanwhile, midfielder Dan Gosling is a major doubt due to a knee injury, but Ryan Fraser is expected to start after coming off the bench against Liverpool on Wednesday.

The Bournemouth back four will have to be at their resilient best on the evening against a Chelsea attack that have blown away most defences, while Joshua King will shoulder the burden of making a mark on the game by continuing his hot streak. 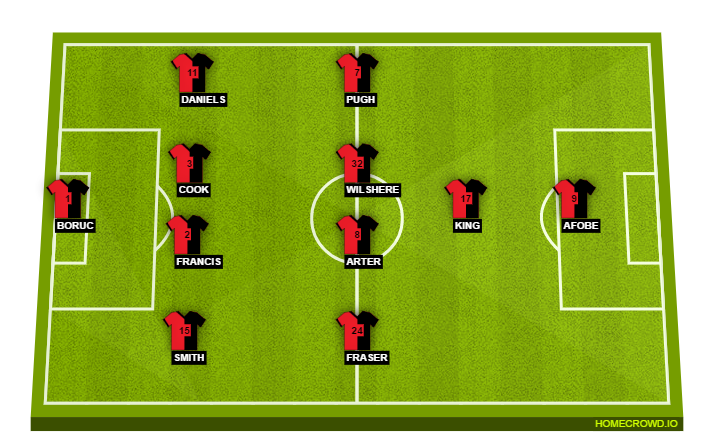 Unlike his counterpart in the Bournemouth dugout, Antonio Conte has no injury concerns to deal with whatsoever, taking a fully fit squad to the Vitality Stadium to face the Cherries on Saturday.

Nigerian international Victor Moses is the last man off the treatment table, and is expected to slot right back in the right wing back position that he has made his own this season after missing the last two league games due to a toe injury.

Conte struggled to replace Moses in the last two matches, with neither Cesar Azpilicueta nor Pedro being nearly as assured in the position as the 26-year-old.

Meanwhile, Thibaut Courtois, David Luiz and Cesar Azpilicueta are playing through injury, with the latter two requiring ongoing treatment for hip and knee injuries respectively, while the Spaniard has a broken bone in his hand.

The visit to Bournemouth though, provides the Chelsea boss to play with his preferred starting XI for the first time in nearly a month, allowing him to prepare in the best possible manner in the climactic end of the season. 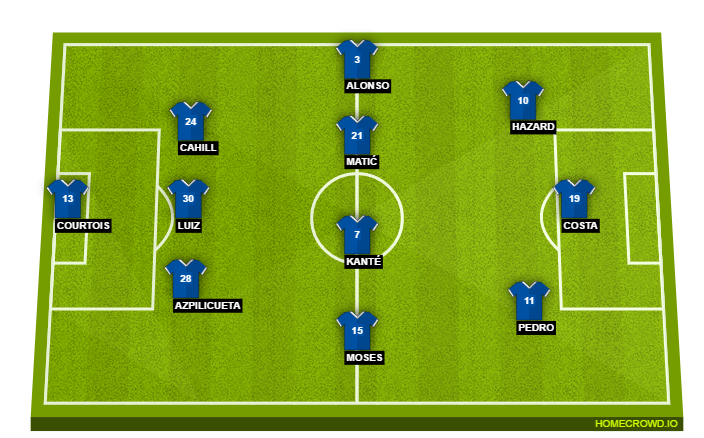 Will Antonio Conte have more cause for celebration on Saturday? (Photo courtesy – Glyn Kirk/AFP/Getty Images)

The long season is slowly coming to an end, and after looking on course to clinch the title well before the culmination of the campaign, it is suddenly looking like the race to win the Premier League could be blown wide open.

Chelsea still lead Tottenham Hotspur by 7 points, but their loss to Crystal Palace last weekend brought the gap down to that level. Spurs will have already played their game before Antonio Conte’s men take the field on Saturday, and the gap could be down to 4 points by then.

This makes this game a must-win for Chelsea to ensure that they don’t slip up at the most crucial juncture of the season. Bournemouth have picked up form of late and have drawn each of their previous three away games, against three tough oppositions in Manchester United, Southampton and Liverpool.

Chelsea would like to do all they can to prevent a four in a row, and going by their form in the match against Manchester City on Wednesday, a win looks likely for Conte’s men. The Hard Tackle predicts a hard fought 2-1 win for the Blues.