Barcelona travel to the Estadio Nuevo Los Carmenes on Sunday to face Granada, eager to keep up with La Liga leaders Real Madrid.

La Liga action returns this weekend after the fortnight-long international break, and Barcelona take the trip to the Estadio Nuevo Los Carmenes on Sunday to take on relegation battlers Granada, when Luis Enrique’s men will be eager to build a winning momentum to maintain pace with Real Madrid.

Granada come into this match in the middle of a terrible run of form, having lost each of their last three matches to fall down to 19th in the table, seven points away from safety, with Leganes occupying 17th spot with 26 points.

Rafinha made the difference for Barcelona in the reverse fixture. (Photo courtesy – Lluis Gene/AFP/Getty Images)

Meanwhile, Barcelona bounced back to winning ways with a closely contested 4-2 win over Valencia in the last match before the international break, having relinquished the lead to Real Madrid after a 2-1 loss to Deportivo La Coruna a week ago.

The reverse fixture ended in a hard-fought 1-0 win for Barcelona, as Rafinha scored the only goal of the match early on in the second half to get the Blaugrana three vital points. Ahead of another crucial encounter for Barcelona, The Hard Tackle takes a closer look at Sunday’s match.

Lucas Alcaraz doesn’t really have many injury or suspension concerns to deal with, and the Granada boss has more players returning to the first team squad than those missing in action. In fact, only one player remains absent for the visit of Barcelona, thus easing some player availability pressure off Alacaraz.

That player is Moroccan winger Mehdi Carcela-Gonzalez, who picked up a knock on international duty with his national side last week. However, Colombian striker Adrian Ramos is back, having recovered from a hamstring injury, and the Borussia Dortmund loanee is all set to start up front on Sunday.

Ghanaian winger Mubarak Wakaso is also available and likely to start after returning from suspension. And Wakaso, along with Ramos and Andreas Pereira will be in the spotlight against a Barcelona defence that has been vulnerable in recent weeks, in order to get the unlikely, albeit highly welcome, three points. 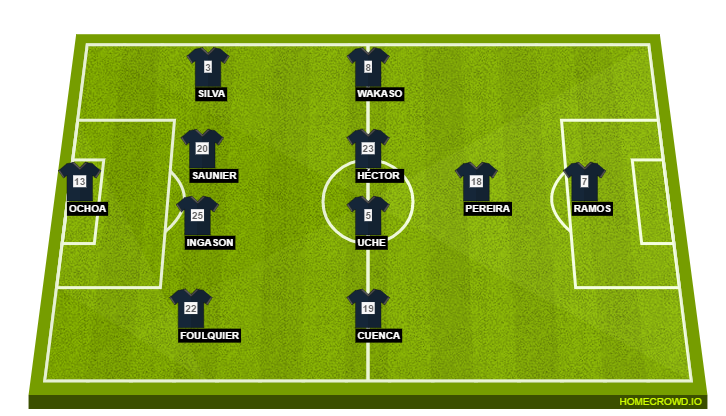 Luis Enrique, just like his counterpart in the Granada dugout, doesn’t really have many injury concerns to deal with, but has one big player absent through suspension. In fact, the Barcelona manager has only two squad players on the sidelines due to injuries.

Aleix Vidal is a long-term absentee for the Blaugrana and he will miss the remainder of the season having sustained the gruesome ankle injury against Alaves in February. Arda Turan is also sidelined due to a groin injury that will put him out of action for three weeks.

But, the major absentee from Luis Enrique’s squad on Sunday will be talismanic forward Lionel Messi, who is suspended for the match after picking up his fifth booking of the season in the match against Valencia, prior to the international break.

In Messi’s absence, Enrique is likely to revert back to a 4-3-3 formation from the 3-4-3 he had been using in recent games. Rafinha is expected to provide company to Luis Suarez and Neymar in attack, while Andre Gomes and Ivan Rakitic are vying for a spot in midfield alongside Andres Iniesta and Sergio Busquets. 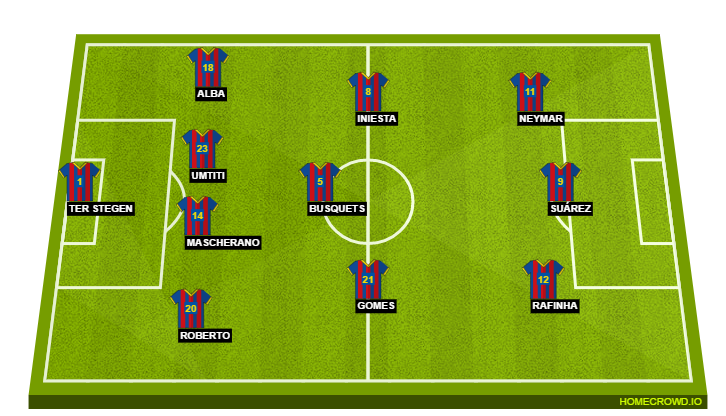 Granada have been one of the poorest teams in La Liga this season, and the league table reflects that. One of the main factors for their shambolic return so far is a severe lack of goals. In fact, only Leganes have scored fewer goals than them, meaning that Granada’s defence has often succumbed under pressure.

On Sunday, they aren’t expected to create much of an impact against the mighty Barcelona, but one man will have different ideas. Andreas Pereira has been one of the shining lights for the relegation battlers this season, bringing youthful exuberance and excitement to the pitch for the side.

The Manchester United loanee has been highly impressive all through the season, as he bids to claim a place for himself at his parent club next season, and he will be under the spotlight yet again on Sunday, if Granada are to make any impression on the match.

Will it be another hard-fought win for Barcelona on Sunday? (Photo courtesy – Alex Caparros/Getty Images)

This is a match that looks like a straightforward win for Barcelona on paper. Granted, the visitors’ form has blown hot and cold all season long, but Granada have been absolutely shambolic of late, and are one of the favourites to go down to the second division come the end of May.

Luis Enrique is missing the services of Lionel Messi ahead of Sunday’s match, but the Neymar has been absolutely scintillating of late, and is arguably the best player in the world currently, on form. In addition to that, Luis Suarez has rediscovered his goalscoring touch while Rafinha is an able backup.

Therefore, anything other than a Barcelona win on Sunday will provide one of the biggest shocks in the Spanish top flight of the season. The Hard Tackle predicts a comfortable outing for Enrique’s men, a 2-0 win for the visitors.